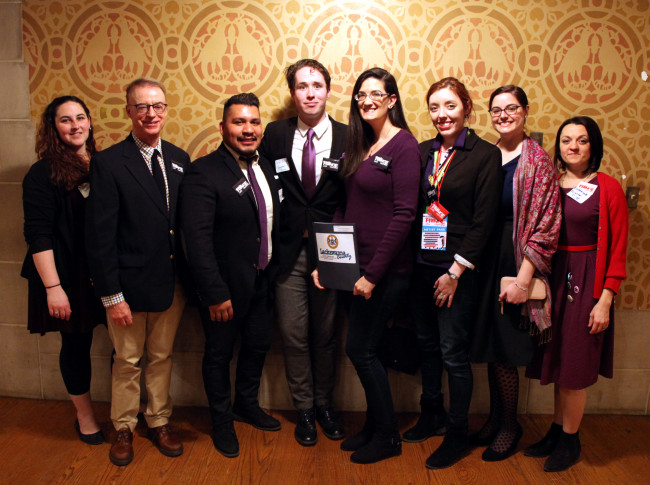 Republican Minority Commissioner Laureen A. Cummings sparked a debate with the Northeastern Pennsylvania arts community last year when she said she wanted to cut arts funding in the budget and allocate the money to the general fund, where some of it could still be used for the arts, but the commissioners would then have more control over what programs are paid for. Some funding for “anchor institutions” like the Lackawanna County Library System, Scranton Cultural Center, and the Everhart Museum, as well as local arts programs, events, and festivals throughout the year, comes from a 1 mill tax that equates to about $12 each year per average single-family household. The Arts and Culture Department accepts applications from the public and decides with a panel what receives funding, often taking into account the economic impact and educational value of the programming.

Making good on that promise about a year later at the commissioners meeting on Jan. 10, Cummings voted against legislation from the Arts and Culture Department that awarded $217,200 in program stream grants and $39,927 in project grants, specifically citing her objection to Scranton Fringe Festival programming. Festival co-founder Conor O’Brien started an online petition to “Save Arts & Culture in Lackawanna County” after her comments in 2017, which caused many artists and supporters of the arts to speak out against her online.

“They’re listing rated R shows. They have rated R, rated PG-13 at the Scranton Cultural Center, and we’re paying for that. I’m not going to be a part of that. … They’re working at the Children’s Library for crying out loud with rated R programming. I’m sorry, I just can’t approve that,” Cummings said at the Jan. 10 meeting.

“I think the public needs to get more involved in some of the things that are happening in our Arts and Culture Department because I have requested and went to their meetings and asked specifically that items were not voted on in regards to some of the shows that they have. I don’t feel they’re appropriate, and I believe that if the taxpayers were aware of some of the items that their taxpayer dollars are going to, they would be outraged.

“Why we’re funding this is beyond me.”

Democratic Majority Commissioners Patrick M. O’Malley and Jerry Notarianni voted to approve the Arts and Culture grants, outvoting her 2-1, but Cummings’ words struck a nerve and prompted several viral Facebook posts from Fringe Festival supporters, who pointed out that the $2,400 grant would go towards children’s shows at the Lackawanna County Children’s Library that are rated G, not anything for mature audiences. The festival’s guide also details each show at each venue and provides its own ratings to inform patrons of what the performances contain before they see them. Longtime supporters like Mark Dennebaum, who owns Scranton production company TwentyFiveEight Studios and helped sponsor the festival, noted this in their social media criticism, with Dennebaum calling her statements “ignorant to a level I can’t even comprehend.”

“Through these comments alone, I am led to believe that she has not attended, nor has any desire to attend, the festival at all through the years which has thought-provoking, honest, talented shows and subject matter. The strange thing is, there are quite a few other programs that cater to adults; why is Fringe being singled out? #BGSS perhaps?” Dennebaum asked in a Jan. 10 Facebook post shared by many festival participants and patrons. BGSS refers to the Big Gay StorySlam, a mature Fringe show at the Scranton Cultural Center, which she may object to because of her outspoken views on the LGBT community that have been called “bigoted,” “homophobic,” and “transphobic.”

“We live in a town that since its inception has thrived on music, art, photography, performance, plays, films, comedy, the absurd, and the heartfelt. I, for one, am concerned about what this means for us as a community, and my confidence in her as a leader if she doesn’t even know what the organization does.”

Editorials and a cartoon by the Times-Tribune joined in on the criticism, which drew the ire of Cummings who, after meeting with the Arts and Culture Department again, remained firm on her stance at the Jan. 24 commissioners meeting.

“I’m not changing my mind and I would never apologize to anything I said. Everything I said was accurate,” Cummings began.

“I do not agree that we should be funding any of these programs. Let me just say that. I think this tax should be gone. I don’t know what they were thinking in implementing this tax. We are basically one of the only counties that has this grant, along with one of the counties that has a library grant. I think there’s duplication in the library tax,” she said, noting that the library receives funding from its separate tax as well as some money from the Arts and Culture tax, which was implemented 13 years ago.

Citing the Fringe Festival grant application, she pointed to particular phrases like “bold, uncensored, and exciting work in all mediums” and said that this is where she came to her conclusions. She insisted that this is not about censorship, but about the use of taxpayer money, adding that religious performances should not be excluded from the festival because that is censorship as well. Cummings brought up how the county also funded “The Trouble with Cali” years ago, wasting taxpayer dollars on an independent film that was critically panned and never released to the general public outside of one screening.

“I do not believe that we should have to fund this at all. As a taxpayer, I’m offended by this. Now other people aren’t, but I am,” Cummings continued.

She took aim at Conor O’Brien yet again, saying that he and others were spreading “lies” about her online, and read his Jan. 14 Facebook post that shared comments from supporter Michaela Moore aloud:

Thank you Michaela Moore + everyone in our region (and beyond) who have spoken truth to power. Those who have spoken out on this very serious matter of censorship, false information and (frankly) political power used to target a small organization for very obviously unfair reasons in these initial days is greatly appreciated.

“They can have freedom of speech all they want, but to print the untrue opinions of theirs? They should have come in here and met with me if they wanted to, or come to the podium and talked here at the meeting and I would have happily debated that issue with them,” Cummings responded, later threatening legal action.

“They’re complaining about censorship, but they want to censor me because they don’t want my opinion. Anything that’s against what they believe in I guess is OK.”

On Feb. 1, however, Cummings did not face O’Brien and other members of the Fringe Festival board when they received their county grant as well as a Pocono Arts Council grant at the Scranton Cultural Center, along with many other artists picking up their monetary awards. In addition to their group, many in the room were wearing Fringe Festival pins in solidarity, along with Pantone’s color of the year, purple, to represent the arts community as a whole.

“We’ve been coming to this for several years, and it felt exciting that people were passionate about something and that there are grassroots, non-Fringe-connected supporters here. It is just as much a celebration as it is a platform for advocacy. Of course, tonight was different than it’s ever been, but we didn’t approach it any differently. We have a lot of new board members, and we rallied them, as this was the perfect opportunity to introduce them,” O’Brien told NEPA Scene after the awards ceremony.

“Any time in our community where we can continue a dialogue and talk about advocacy and speaking truth to power and shedding light on misinformation I think is always great and, at the end of the day, it’s a lovely event and there’s a lot of other organizations here that are receiving the bulk of the funding, which we’re just thrilled to see. It’s a chance for us to connect with our colleagues and peers that we don’t always get to, and that’s a shame. That’s something that, I think, the past few weeks has illuminated the need for more of. I’m really excited to get back to work.”

Fringe Festival co-founder Elizabeth Bohan said that, in order to be completely transparent with taxpayers, the festival will be posting all documentation related to the funding and what programs it will pay for on its website. She said she was “proud and thankful” that so many other grant recipients showed their support for the Fringe that night.

“We pride ourselves a lot on our guide that we put together, and many fringe festivals don’t rate their shows. I think it’s important. I wouldn’t expect people to get mad that we do that,” Bohan added.

“One thing that I always say is that we don’t believe in censorship, but we believe in letting the audience know what they’re getting into.”

Tonight team #scrantonfringe was excited to receive our Lackawanna County Arts and Culture grant, as well as our Pocono Arts Council grant. Special thanks to Maureen McGuigan, Chris Calvey, Tassy Gilbert, and the Lackawanna County Commissioners for helping us provide a platform for the arts in Scranton for the fourth year!