As mentioned in last week’s review, Breaker Brewing in Wilkes-Barre is canning a whole bunch of beers for the first time, so we’re going to try a very different one from this local brewery this week – Peaches and Dreams Dreamsicle.

This NEIPA contains “notes of gummy peach rings with tastes of papaya, vanilla icing, ripe guava, dried mango slices, and fresh cut grass,” according to the description, so will this be more of a dessert than a beer? Let’s wake up and see! 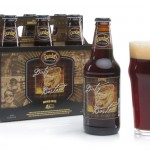