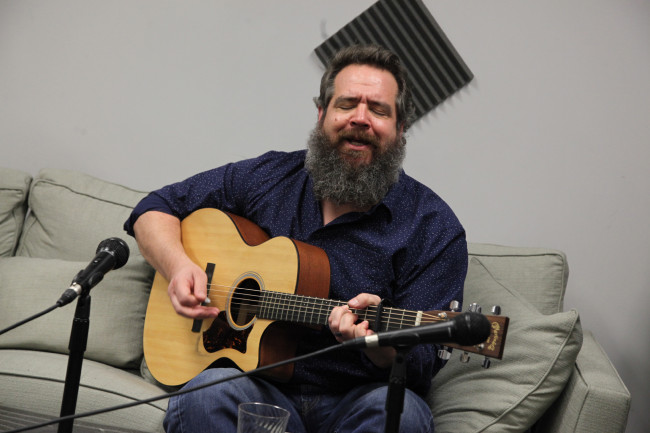 A few weeks ago during the live recording of Episode 49 of the NEPA Scene Podcast at Coal Creative’s production studio in downtown Wilkes-Barre, Irish folk singer/songwriter Mickey Spain of Makem & Spain fame opened and closed the show with some acoustic songs, so with St. Patrick’s Day right around the corner, we’re offering these tunes as free downloads to keep everyone in the Irish spirit even after Parade Day.

His performances of “Nancy Spain,” written by Barney Rush and recorded by Christy Moore; “The Ballad of Roddy McCorley,” written by Ethna Carbery; and his original tongue-twisting children’s song “I Wish I Was a Fish” can be watched on YouTube and streamed or downloaded via iTunes, SoundCloud, and Stitcher.

The NEPA Scene Podcast and this acoustic performance are made possible by local sponsors Beer Boys, The V-Spot, Coal Creative, and viewers who tune in every week.

Originally from New Hampshire, Spain is currently living in Scranton with his wife Erin and will be playing at Kilcoyne’s Bar in Scranton on the first Saturday of every month, The Keys in Scranton on March 16, McCarthy’s Red Stag Pub and Whiskey Bar in Bethlehem on March 17, and with his brother Liam at the first-ever Steamtown String Fling at the Scranton Cultural Center with The Dishonest Fiddlers, Brother Roy, MiZ, and Christopher Kearney on March 23.

Watch “I Wish I Was a Fish” on YouTube:

During the podcast, we talk about Mickey growing up in Manchester, New Hampshire; how his father, being surrounded by folk music, and an injury got him to pick up a guitar; performing with his brother and forming Makem & Spain; how he met his wife and why he moved to Pennsylvania; recording with folk heroes like Tom Paxton, Roger McGuinn from The Byrds, Jonathan Edwards, Gordon Bok, David Mallett, and Noel Paul Stookey of Peter, Paul and Mary; whether or not you should meet your heroes; his relationship with his younger brother Liam; his inspiration and songwriting process; creating songs for kids and an interactive program for elementary schools; memorable people and places from touring the world; his initial reaction to the madness of Parade Day in Scranton and if the focus on drinking plays into Irish stereotypes and takes away from the celebration of the culture and heritage of Ireland; Erin’s work with the Parade Day committee and their attempt to clean it up over the years; Kilcoyne’s bringing Irish music back to the area after the closure of The Banshee with monthly shows; house shows and the general accessibility of his music; joining the stellar Steamtown String Fling lineup; his first open mic experience at NEPA Scene Rising Talent and how much he enjoyed meeting comedians and fellow musicians; and more.

We also answer some questions and react to comments from live viewers, discussing Mickey’s musical influences, his beard, and forthcoming gigs.