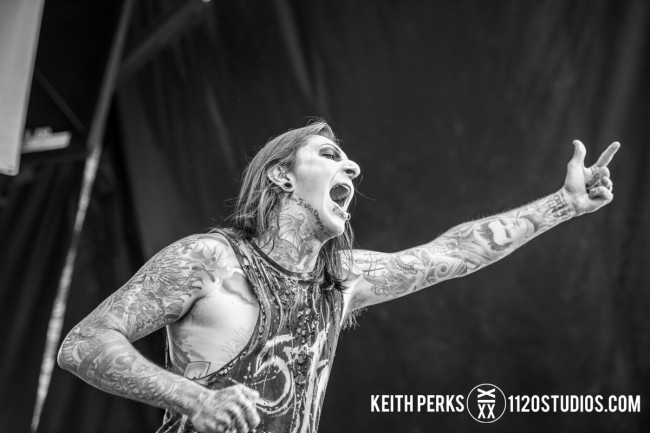 Ever since Vans Warped Tour’s well-publicized announcement back in November that the annual traveling punk rock fest will be coming to an end in 2018 after 24 years, speculation has run rampant about its final lineup, fueled by the marketing that this would be the last opportunity to experience a festival that so many people of different generations are so nostalgic for.

While rumored to contain more old school Warped acts this year, the official lineup announced on Thursday contains more expected and straightforward choices, particularly for its last stop at The Pavilion at Montage Mountain on Thursday, July 26. The Scranton date features mainstays like Reel Big Fish, Less Than Jake, Mayday Parade, Simple Plan, 3OH!3, Asking Alexandria, We the Kings, Four Year Strong, Every Time I Die, and Silverstein joining interesting additions like Frank Turner, Twiztid, Nekrogoblikon, and Scranton’s own Motionless In White, who have played a few Warped Tours and headlined in 2016. (See the full 2018 lineup below.)

It was the summer of 2005 when we received a message on the Motionless In White Myspace page that we had won the Ernie Ball Battle Of The Bands contest and we were selected to be 1 of 4 local acts that were chosen to play on the Ernie Ball Stage at the Scranton PA Vans Warped Tour date. We were ecstatic! It was the biggest thing that we could have hoped to happen for our band, as at the time we were just four kids fresh out of high school who’s ultimate dream in life was to some day do a full U.S. Warped Tour run. As the years passed, that Ernie Ball battle of the bands win marked the very first step we took to help make that dream become a reality not just once, twice, three times… but as of this Summer of 2018, we are so very very honored to announce that this will be Motionless In White’s fourth full Warped Tour appearance, as we will have the privilege of being a part of the final full U.S. run that Warped Tour will be doing.

We cannot thank Kevin Lyman enough for believing in our band when we were absolutely nothing and helping us grow up as both people and as artists over the past 13 years on his amazing platform that he has shared with so many bands and fans. Our career would not be where it is without Warped Tour and we cannot wait to be a part of this last one to make it as special as possible. See you this summer!

The feeling and respect is mutual. While reflecting on 23 years of producing the festival in a statement released last year, Warped Tour founder Kevin Lyman named MIW among the acts he was proud to book and help grow and succeed.

Early Bird tickets, which are 3D collector tickets featuring “stunning 3D graphics and effects, custom printed in the U.S.,” are on sale now and can be purchased online at livenation.com for $55 each, plus fees.

“I truly am happy to get the chance to travel around the country one more time to thank you for your support and bring you another best day ever,” Lyman said on the festival’s website.

“I have spent half of my adult life traveling alongside Kevin on the tour, connecting with bands and fans around the world. Bringing music and action sports to youth for over two decades has been a personal honor, and I’m excited to hit the road on the last cross-country tour,” added Steve Van Doren, vice president of events and promotion at Vans.