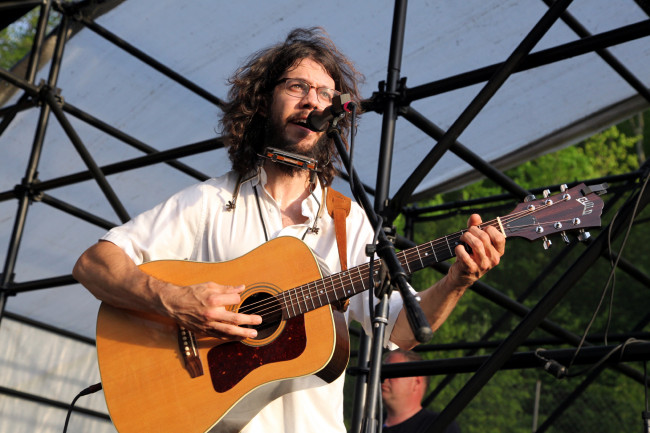 The Scranton Cultural Center at the Masonic Temple has announced a third program in its regional musician showcases – the inaugural Steamtown String Fling.

Featuring bluegrass, Americana, roots, folk, and Celtic music, the show will be headlined by Scranton’s own Dave Brown and the Dishonest Fiddlers and take place in the SCC’s Grand Ballroom on Friday, March 23 at 7:30 p.m. This night of mandolins, violins, upright bass, banjos, and guitars rides on the coattails of the popular Winter Blues Guitarmageddon and Jump, Jive an’ Jazz events, which took place in February and September, respectively.

“It’s so important to continue to provide a stage for regional talent,” says Maria Santomauro, coordinator of the event and SCC Director of Strategic Initiatives. “Many of the artists that you’ll see have gotten their start here in NEPA and now tour the country, so it’s an incredible honor to have them here.”

There will be no sitting still with this star-studded lineup of regional bluegrass, folk, and Americana players. In addition to Dave Brown and the Dishonest Fiddlers, other featured performers include the incomparable Mike MiZ, followed by special guest Brother Roy, New York’s missionary of rock ‘n’ roll. The Spain Brothers, Mickey and Liam, will round out the lineup with some timeless Celtic classics. In addition, the special guest emcee is Northeastern Pennsylvania’s very own “Coal Town” crooner, Chris Kearney. The night will cap off with an all-star jam.

Folk and bluegrass music are obvious influences that have helped to forge and inspire the band’s unique, homegrown sound while providing a solid musical foundation. Socially conscious songwriting and old-timey sensibilities are certain to open even the most discerning ear. Their debut album, “The Whistle Missed the Train,” is available now on iTunes, Amazon, CD Baby, and Spotify. Their follow-up was recorded in the fall of 2017 and will be released this year.

Liam and Mickey Spain are second generation singer/songwriters from the mill town of Manchester, New Hampshire. They grew up in a household steeped in folk music and musicians. They began performing as a duo in the 1990s and soon garnered a following. Mickey’s rich baritone voice and Liam’s mastery of stringed instruments have made them a very sought after act.

In 2002, Liam and Mickey joined forces with Shane, Conor, and Rory Makem, sons of the legendary Irish folk singer Tommy Makem, and began touring as the Makem and Spain Brothers. They highlighted venues and Irish festivals across the United States, Nova Scotia, and across the sea to Ireland. They recorded four CDs along the way and shared the stage with some of the greatest acts in the business. Today, Liam and Mickey have returned to performing as a duo, concentrating on original compositions as well as traditional and contemporary folk songs.

Learn more about them in Episode 49 of the NEPA Scene Podcast, which features a live performance by Mickey:

Brother Roy is New York City’s rock and roll missionary. It’s impossible not to immediately like the guy when you walk into the bar. He looks like that guest who no one invited and was the last one to leave the party, but there’s something timeless about his gruff croon accompanied by an unrelenting pulse on an old battered piano. You can’t help but listen. He lists Harry Nilsson, The Beatles, The Band, Bob Dylan, and Neil Young as some of his biggest influences. These are high standards to live up to, and many have tried and failed. But with refreshing honesty, dedication, and a healthy dose of self-deprecating humor, Brother Roy has managed to find a voice for himself in a genre so beloved that it might as well be a religion.

Chris Kearney will be serving as the evening’s emcee. The local singer/songwriter, known for his work in the Coal Town Rounders, performs musical stylings influenced by classic country singers similar to Hank Williams and Merle Haggard, with a nod to pioneers of bluegrass and an appreciation of the clever lyrics of John Prine and Bob Dylan. This is music for the everyman.

Mike Mizwinski is a singer, songwriter, and guitarist from Scranton known for delivering a soulful blend of original guitar-driven Americana rock ‘n’ roll. The artist known simply as MiZ has shared the stage with Jason Isbell, Derek Trucks, Kenny Wayne Shepherd, Leon Russell, Railroad Earth, Chris Isaak, Shawn Colvin, and many more. He is currently touring in support of his third studio album, “A Year Ago Today,” previewed on Episode 42 of the NEPA Scene Podcast:

The Steamtown String Fling is presented by Toyota of Scranton and sponsored by United Gilsonite Laboratories, UGI, the Walmart Foundation, Endeavor Audio & Lighting Services, and LT Verrastro, Inc. It is supported by Lackawanna County and the Pennsylvania Council on the Arts.