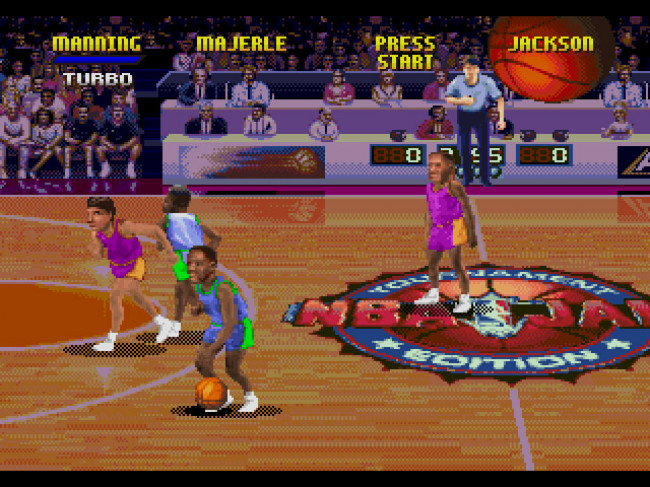 One of the most peculiar genres as it relates to my particular video game store in Mayfield has to be sports titles. There is no in between. There are either gamers who flat out can’t stand them or those who only collect sports titles (which, since most are incredibly inexpensive, must be pretty easy).

I, however, am somewhere in between, as I am certainly not a gamer who goes out and buys whatever yearly edition of a sports title is called a must-have in the genre. I fancy myself more of a fan of some select sports classics, many of which you wouldn’t call traditional titles either, if you follow. All this month we’re “Springing into Sports” (I know it isn’t spring yet, but I like it and it makes me think of warmer weather), so we begin with what is arguably the best home console version of this game, period.

Today, we head to the court in “NBA Jam: Tournament Edition” on the Sega Saturn!

Not to discredit any of the soundtracks featured on any other ports of this, or even the original “NBA Jam” but, to me, next to an actual arcade cabinet of this game, this is the closest you’re going to get to clear, crisp audio of some of the best sports game music you’re going to hear.

With electric guitar riffs that scream ‘90s hard rock, along with some equally funky synth spots, you have simple, yet addictive tunes that suit the fun theme this series of games is known for. Nobody has a rotten time playing “NBA Jam” games, not even the people who don’t know how to play, and a lot of that is due to the music and, yes, the sound effects the game has. There’s something so purely ‘90s magic about the announcer and, to this day, that voice is still fondly regarded as both synonymous with the “NBA Jam” franchise and an iconic piece of retro sports titles of the time. “BOOM SHAKA LAKA!”

If you’re someone like me who got their first taste of this series in the arcades, you know that literally one of the biggest attractions was how the characters would get bigger the closer they would get to the hoop, creating more of an illusion of watching an actual basketball game, which many games of this sort were not doing, relying on the standard universal size throughout.

This may seem like a little thing right now, and perhaps even kind of silly seeing these players with giant heads (which, of course, could be further enhanced with a cheat code) but, for the time period, it was kind of unique to see a game that was not utilizing a full team of players and, thus, the more traditional sense of the sport choosing a more suitable camera angle at times.

In addition, when choosing your team, there’s something so nice and refreshing in seeing graphics of the players instead of just floating heads or nothing at all.

The “NBA Jam” franchise was the first of its kind to keep enough of the traditional sport while also turning it on its head a bit and giving it a looser, arcade feel. Many others were soon to follow, with games like “NFL Blitz” and “NHL Hitz,” just to name a few. Like its predecessor, “NBA Jam: Tournament Edition” is an absolute blast to play and, even now in 2018, we still have our favorite teams and tandems to use that we guarantee victory with (especially if we help out a cousin and friend in need getting schooled in the game – right, Ron DeMarco?).

I’ve always believed the games we remember the most as we grow up are often those that appealed to more than just one kind of gamer. “NBA Jam: Tournament Edition” does allow hardcore fans of the franchise the ability to work their way through the ranks of these NBA duos, following the rules and testing their skills. It also allows the more casual gamer the ability to go crazy with silly codes that bring in hidden characters, make the players’ heads gigantic, and even have unlimited turbo. If you’re not having fun with “NBA Jam: Tournament Edition,” you’re just not trying hard enough.

Today, games like the “NBA 2K” series are custom-built for sports fans and those who want that realistic feeling of being in that world. “NBA Jam: Tournament Edition,” and the franchise as a whole, has always been about the exact opposite of that, relying on bizarre physics, razzle dazzle, and a whole bucket load of monster jams and cries of “HE’S ON FIRE!” to keep you entertained and playing. “NBA Jam: Tournament Edition” for the Sega Saturn is but another example of making a basketball game for people who don’t like basketball.

The best part in all of this is that a nice copy of this game will only run you somewhere in the $20-$25 range, and you don’t have to play it on the Sega Saturn! Ports of this on the Super Nintendo and Sega Genesis, while having a far less crisper appearance, are still fun and cost a lot less!

Join me next time as we dribble off the court and storm onto the most iconic football fields in gaming history as we kick off with “Tecmo Super Bowl” on the original Nintendo Entertainment System!

Until then, keep those shovels handy and, fret not, spring will be here before you know it! You know, another great time to game on!