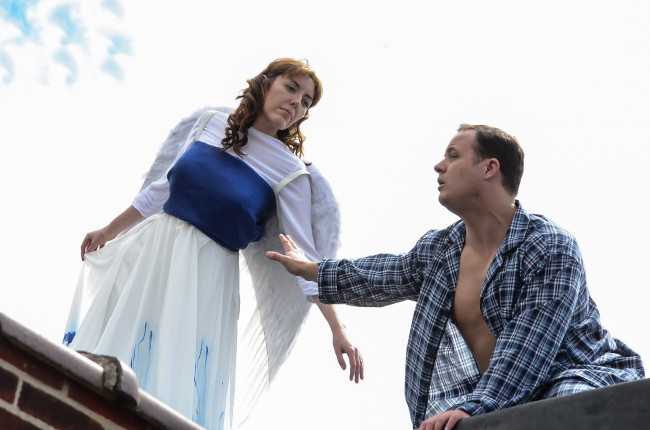 After an award-winning run in 2016, the Little Theatre of Wilkes-Barre will mount the second installment of Pulitzer Prize and Tony Award-winning play “Angels in America.” Performances begin Friday, May 4 and run through Sunday, May 13.

Written by American playwright Tony Kushner and recently mounted to critical acclaim by the National Theatre in both London and on Broadway, “Angels in America: A Gay Fantasia on National Themes” is a two-part epic that shaped much of the 1990s American theatre landscape. “Angels in America” first opened on Broadway in 1993 and went on to receive both Pulitzer and Tony Awards.

“Angels in America, Part One: Millennium Approaches” is set in the backdrop of 1985 in New York City during the AIDS crisis and interweaves the stories of two couples along with their mentors, ghosts, and the divine.

“‘Perestroika’ is a very different kind of play than ‘Millenium Approaches’ in its theme and scope but, at its heart, it is an extremely human story,” said director Dave Reynolds.

“All of us are striving in our daily lives to progress, to grow, to have ‘more life.’ This play is a wonderfully twisting and turning look at the very nature of what it means to be human.”

In “Angels in America, Part Two: Perestroika,” audiences will pick up where the previous production left off, continuing the ensemble’s journey through themes of progress, worlds in crisis, and the very human desire for more life.

Both productions feature adult themes and content, handling sexuality and the complexity of spirituality, the metaphysical, and the horror of disease through poetic language and frank humor.

“‘Perestroika’ is a piece of theatre that challenges anyone who encounters it at every turn. Kushner has built a world with this play that touches on love, life, death, disease, faith, politics, and everything in between, and he does so in a world that can take you from a Brooklyn apartment in one scene to a room in heaven the next,” Reynolds said.

“This kind of theatre magic is a very challenging and, at the same time, freeing notion for the cast and crew.”

The cast and crew from the 2016 production have returned to their roles as well.

“Well, what can you say… if it ain’t broke, don’t fix it. This cast is perhaps the most talented group of actors I’ve ever had the good fortune to direct. I could not imagine this production without these dedicated performers reprising their roles,” Reynolds emphasized.

“Likewise, our design team and crew is back for ‘Perestroika,’ though with new and exciting aesthetic ideas. I am truly indebted to all of them for their time and talents.”

Audiences should note that this production will featured explicit depictions of adult themes, including sex and language.

Tickets for “Angels in America” are $17 and can be purchased at the Little Theatre box office or online via Ticketfly.

Little Theatre of Wilkes-Barre is one of the oldest continually-running community theatres in the United States, dating back to 1922 with its original founding as the Drama League. Today, it is a nonprofit, 501(c)3 corporation housed at the 537 North Main Street Playhouse in Wilkes-Barre. Little Theatre of Wilkes-Barre’s mission is to provide professional quality, Broadway-style live theatre while ensuring a welcoming environment that enhances the cultural growth of the Greater Wyoming Valley.