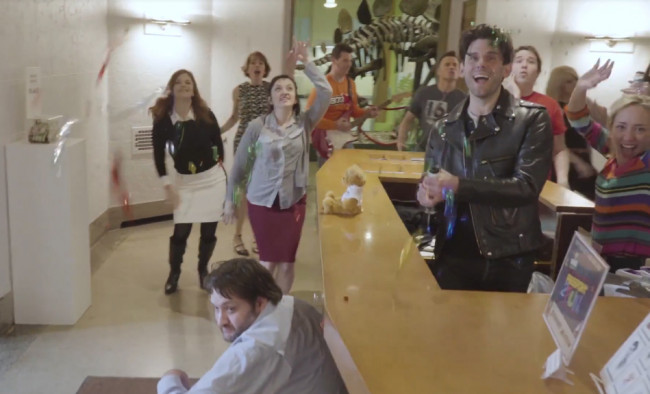 The Everhart Museum of Natural History, Science, and Art is representing Scranton and the eastern United States in a friendly dance competition among museums around the world – and they need your vote to advance to the next round.

The website When You Work at a Museum hosts an annual contest asking museums from around the world to submit lighthearted videos of them dancing to a song, and this year will be the fifth and final dance-off. While the only prize is a trophy and “bragging rights,” it serves as a chance for these public institutions to raise awareness of their work and show that not all museums are as stuffy and dry as some people may assume.

“In the last three years, several museums received local, national, and international media coverage online, via television and radio, and in print.”

Museums are organized by region, and those who garner the most votes in public polls in each region move onto the final “Thunderdome Round” to determine the winner. Voting begins today at 8 a.m. for the Eastern U.S. group here, which pits the Everhart against the Toledo Museum of Art and the Science Museum of Virginia, and ends at 8 a.m. tomorrow morning.

With Scranton known as the fictional setting for NBC’s hit television show “The Office,” employees and board members of the Everhart Museum were joined by various local actors, community members, and media personalities to create a parody of the funny Dunder Mifflin lip dub of “Nobody But Me” by The Human Beinz from the opening of Season 7:

The video came out great despite having to work around the museum’s current renovations, proving that there, “Ain’t no party like a Scranton party, ‘cuz a Scranton party don’t stop.”

Watch the original video from the 2010 “Office” episode “Nepotism” for comparison’s sake:

Cast your vote as many times as you’d like here and learn more about the museum below:

Founded in 1908 and located in Scranton’s historic Nay Aug Park, the Everhart Museum (1901 Mulberry St., Scranton) is the largest general museum in Northeastern Pennsylvania. For over 100 years, the museum has delighted the region with an ever-changing selection of exhibitions and programs. It was founded in 1908 by Dr. Isaiah Fawkes Everhart, a Scranton physician and businessman with a keen interest in natural history. Through the museum’s collections, exhibits, and programs, it strives to integrate natural history, science, and art into the lives of people and spark their imaginations, challenge thought, and provide enjoyment.

Museum hours are noon-5 p.m. on Mondays, Thursdays, and Fridays; 10 a.m.-5 p.m. on Saturdays, and noon-5 p.m. on Sundays. Regular admission is $7 for adults, $5 for seniors and students, and $3 for children ages 6-12, while museum members and children under 5 are free of charge.

The museum relies on the generosity of donors to sustain its visions and to continue serving the region in exciting new ways. Donations, which can be made online, directly support the activities of the Everhart, helping to maintain all of its permanent collections, and sustaining its roster of exhibitions, education programs, and events.