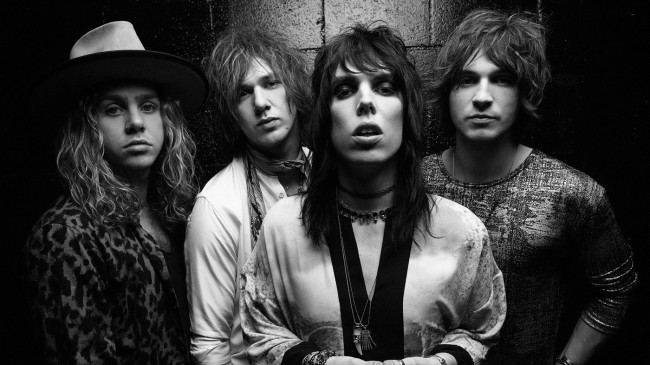 For “One Night Only,” British rockers The Struts will bring their electrifying collection of rock ‘n’ roll anthems to the ArtsQuest Center’s Musikfest Café at the SteelStacks in Bethlehem on Tuesday, July 10 at 8:30 p.m.

With their lavish stage presence and magnetic appeal, The Struts are reviving the glitz, glam, and fun of rock ‘n’ roll. Before even releasing their first album, the U.K.-bred four-piece opened for The Rolling Stones, got handpicked by Mötley Crüe to serve as the supporting act for the band’s four last-ever performances, and toured the United States on a string of sold-out shows. With their 2016 full-length debut, “Everybody Wants,” lead vocalist Luke Spiller, guitarist Adam Slack, bassist Jed Elliott, and drummer Gethin Davies revealed the supreme mix of massive riffs and powerfully catchy melodies that have already slain so many adoring audiences around the globe.

“Everybody Wants,” the follow-up to “Have You Heard” – a 2015 EP whose lead single, “Could Have Been Me,” hit No. 1 on Spotify’s viral chart, earned more than 2.5 million VEVO and YouTube views, and shot to the Top 5 on Modern Rock radio charts – unleashed a manifold of arena-ready tracks. Pairing up with producers like Gregg Alexander of the New Radicals and Marti Frederiksen and recording in such far-flung locales as a refurbished London church and a studio in the Spanish region of Andalucía, The Struts proved the iconic power that prompted Yahoo Music to name them “one of the most exciting and electric performers in rock today” and MTV to proclaim the band “well on their way to bringing rock and roll back to the forefront.” The album features singles like the hard-charging “Put Your Money on Me” and the gritty-yet-exhilarating “Kiss This.”

Released in 2017, “One Night Only,” the band’s most recent single, is a “Queen-esque stomper” that pays tribute to their fans.

See NEPA Scene’s photos of The Struts performing with Bleachers, Bishop Briggs, and Welshly Arms in Wilkes-Barre last year here and read our review of the band’s first Wilkes-Barre performance back in 2015 here.