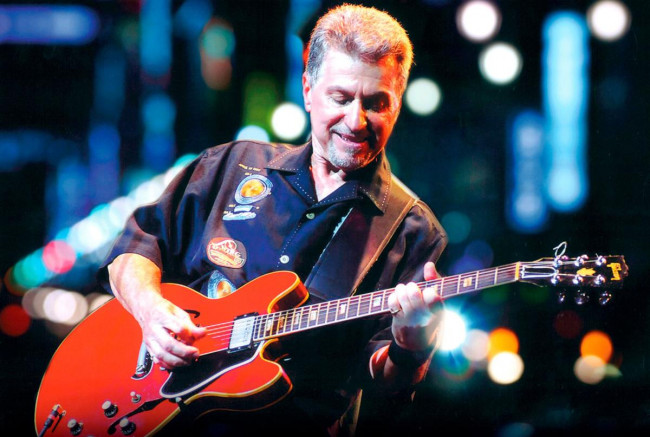 Johnny Rivers has sold over 30 million records, achieving 17 gold records and 29 chart hits. Those hit songs include “Memphis,” “Secret Agent Man,” “Poor Side of Town,” “Mountain of Love,” “Summer Rain,” “The Tracks of My Tears,” “Baby I Need Your Lovin’,” “Swayin’ to the Music (Slow Dancin’),” “Rockin’ Pneumonia-Boogie Woogie Flu,” and “Midnight Special.”

In 1964, when the British Invasion was in progress and American rockers were tough to find on the U.S. pop charts, Rivers was one of the first to regain a foothold; his first Top 10 record came right in the midst of Beatlemania. His formula was much the same as the British-style vintage American rock ‘n’ roll and R&B, played with a verve and simplicity that gave his music a contemporary edge. Over the next four years, his funky, go-go rock gave him a steady stream of Top 10 records. His first No. 1 record came when, against the advice of the record company, he abruptly switched gears and began cutting ballads.

The Southern tone in much of Rivers’ music was authentic. John Henry Ramistella was born on Nov. 7, 1942 in New York City. When he was about 5, his father wound up out of work. The Ramistellas moved to Baton Rouge, Louisiana, where an uncle, head of the Louisiana State University art department, got John’s dad work painting houses and antiquing furniture. Rivers’ first musical inspiration was his father.

“My dad and uncle used to get together and play these old Italian folk songs on mandolin and guitar.” As Rivers started playing, he listened to R&B on the late-night radio, megawatt stations like WLAC in Nashville. However, R&B was a way of life in Baton Rouge. “When I went to Baton Rouge Junior High, Fats Domino, Jimmy Reed, and guys like that used to play at our dances,” Rivers recalled.

By junior high, he was sitting in with various local bands, including one led by Dick Holler, who later wrote “Abraham, Martin and John.” Holler’s guitarist was the still-unknown Jimmy Clanton. Holler, Rivers says, “introduced me to a lot of R&B artists and opened up a whole new world for me.” Rivers formed his own band The Spades in 1956. “We played all Fats’ tunes… Little Richard, Larry Williams, Bobby Bland,” Rivers said. “We became the hot little band around Baton Rouge. Then Elvis Presley and Jerry Lee Lewis hit, so I took on a little touch of rockabilly.”

Johnny and The Spades toured Louisiana, Texas, Mississippi, Arkansas, and Alabama. His first recording, “Hey Little Girl,” was released by the Natchez, Mississippi-based Suede label and sold well on The Spades’ touring circuit.

In 1957, Rivers flew to New York during a school vacation and stayed with an aunt there. He wanted to meet Alan Freed, and he did. “It was like a scene out of an Alan Freed movie,” Rivers said. He was at WINS in Columbus Circle. “I stood in front of the radio station. It was freezing cold, and he came up with Jack Hooke, who was his manager. I said, ‘My name’s Johnny Ramistella. I’m from Baton Rouge, Louisiana, and I have a band. I play and write and I’d like you to hear my music.’ Alan gave me his card and said, ‘We have an office down at the Brill Building on Broadway. Why don’t you come down tomorrow afternoon?’ I went down and Jack Hooke was there, and I played four or five songs.”

Hooke called George Goldner, owner of Gone and End records, whose office was also in the Brill. Legendary songwriter Otis Blackwell, author of “Don’t Be Cruel” and “Great Balls Of Fire” arranged Rivers’ debut single “Baby Come Back” b/w “Long, Long Walk.” Freed also gave Johnny a new name. “I was sitting around with Jack and Alan, and they were gettin’ ready to release the record,” Rivers remembered. “Alan [said] ‘Your name… you need to come up with something a little more musical.’ We were talkin’ about where I grew up on the Mississippi River and somehow Rivers came out of that. That was the first time I used that name.”

Back in Baton Rouge, Rivers began touring as a solo act with innovative Southern comedian Brother Dave Gardner. At a show in Birmingham, Alabama, he met Hank Williams’ widow Audrey, who brought him to Nashville around 1959 and got him a contract with Cub, a subsidiary of MGM Records. He cut two singles for Cub backed by some of Nashville’s best session players: Floyd Kramer, Buddy Harman, Bob Moore, and Hank Garland, who became a close friend. Rivers also hung out with Roger Miller, then a promising songwriter at Tree Music, Miller’s publishing company.

Rivers credits his uncanny gift of finding good songs and writers to his New York and Nashville experiences. “I learned that the song was everything from hangin’ out at the Brill Building and in Nashville around Tree Music,” he said. “I used to cut demos for Hill and arrange songs when I was in New York. Guys like Otis Blackwell would come in with a new tune and they’d get me to do the Elvis Presley sound and cut demos for them. 25 bucks a demo.”

Around 1960, as Rivers alternated between Nashville and Baton Rouge, Merle Kilgore, then a DJ at KWKH in Shreveport, got him a spot on the Louisiana Hayride. He also introduced him to Shreveport guitar legend James Burton, home on vacation from working with Ricky Nelson in California. Burton took a tape of Rivers’ song “I’ll Make Believe” back to California. Within a month, he called to tell Rivers that Nelson would record it. The song wound up on Nelson’s 1960 Imperial LP “More Songs by Ricky.”

Rivers flew to Los Angeles, met Nelson and the band, and relocated to L.A. around 1961. “I was thinking of producing records,” he noted. “I was starting to give up on the artist idea. I’d kicked around for so long I was starting to look in other areas. Then I met a producer named Nick Venet and wound up doing some stuff for Capitol.” The 1962 Capitol sides, including a cover version of Lefty Frizzell’s country hit “Long Black Veil,” didn’t sell, but Rivers’ contacts gained him work as a writer and producer.

Rivers returned to the stage in 1963, almost by accident. He was a regular customer at Bill Gazzari’s club on La Cienega Blvd. in L.A. for some time. “Hangin’ out in the studios, bein’ a musician, I was always up late, so I wound up goin’ by there quite a bit,” Rivers said. “It was a little Italian restaurant that usually stayed open until 4 in the morning. When the clubs closed at 2, everyone that was still hungry would go get some good food. He had a jazz trio there.”

One night, Rivers found Gazzari forlorn because his house band was leaving. “Bill said, ‘You’re a musician. Can’t you come in and help us out for a few nights until I can find somebody?’ I said, ‘I play funky rock ‘n’ roll. I don’t think that’s what you want in here.’ He begged me, ‘Please come in and play your stuff until I find another jazz group.'”

Rivers devised a formula: “Trini Lopez had been playing over at PJ’s, doin’ this slap rhythm thing. I said, ‘I can do that kind of stuff.’ I didn’t have a band, so I called Eddie Rubin, a jazz drummer. He wasn’t gigging at the time, so he and Eddie went into Gazzari’s together, just guitar and drums, and played what we thought was going to be a three or four-day gig.” To everyone’s surprise, huge crowds gathered to hear Rivers and Rubin play rock and R&B hits. Gazzari’s profits soared, and when Rivers was ready to leave, Gazzari offered him more money and let him hire a bassist. Joe Osborn, just starting to become an L.A. studio legend, joined Rivers and Rubin.

Rivers also met two men at Gazzari’s who would play major roles in his career: Lou Adler, who became his producer, and Elmer Valentine, who was opening an L.A. version of the Paris Whisky A Go-Go club on the Sunset Strip. Valentine offered Rivers a year’s contract to appear at the new club. On Jan. 15, 1964, he opened. Three days later, The Beatles’ “I Want to Hold Your Hand” entered the charts.

“The Whisky was a smash from opening night,” Rivers said. “I brought my following from Gazzari’s.” Rivers and his famous red Gibson ES-335 guitar symbolized the Strip’s new youth-oriented atmosphere. They weren’t at the Whisky long when he and Adler thought of cutting a live album. Another L.A. club owner loaned Rivers and Adler money to hire Wally Heider’s remote recording unit. “We recorded this album two nights in a row and took it to every record company in town. None of them wanted it,” Rivers recalled.

Liberty Records executive Bob Skaff liked the tape and convinced reluctant Liberty President Al Bennett to release it on Imperial Records. Bennett had purchased Imperial from founder Lew Chudd and ran it as a small, semi-independent label. To release Rivers’ recordings, he and Adler formed Dunhill Productions with Bobby Roberts (an ex-member of The Dunhills, a tap dancing group that inspired the name) and Pierre Cossette (now producer of the Grammy Awards show). This eventually evolved into Dunhill Records, home to L.A rock legends The Mamas & The Papas, The Grass Roots, and Steppenwolf.

Adler and company were disappointed that the album would appear on what they considered a secondary label. But not Rivers. “When they said ‘Imperial Records,’ I just jumped up and went ‘Yeah! Yeah!’ Because I grew up with nothing but Imperial Records – Bobby Mitchell, Fats Domino, and Ricky Nelson – and I thought, ‘What a cool label!'” Both Rivers and Adler came to see Imperial’s smallness as a plus. “It gave Lou and me the autonomy to pick our own singles and work closely with the promotion men and marketing people,” Rivers said. “I think that had a lot to do with why we had so much success, because we had a real good handle on it.”

Rivers has never retired from recording or the road. He’s toured consistently and enjoys popularity overseas, particularly in South America. In 1990 and 1991, he recorded in the same L.A. studio where he recorded many of his earlier hits. He still uses a Gibson ES-335 onstage. He expresses delight with the resurgence of the blues, feeling its honesty and grit has had a cleansing effect.

“It’s finally gotten back to where everyone’s accepting that genuine sound again rather than the techno-pop stuff,” he says. His songs are testimony to the era of “genuine sound.” Genuine is the only way Rivers knew – and knows – how to do it. 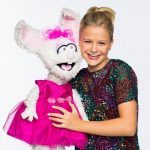