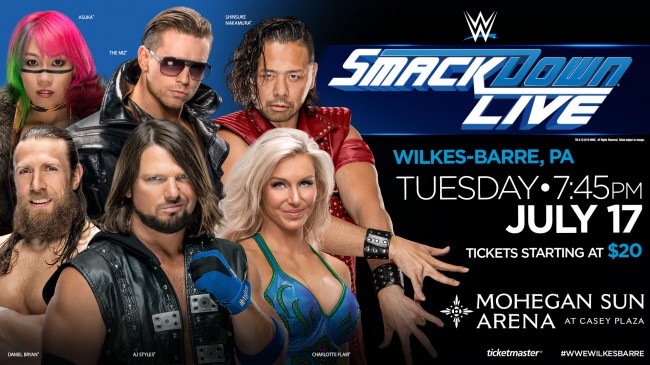 Following up the “WWE Live” show at the Mohegan Sun Arena at Casey Plaza in January, it was announced today that “WWE SmackDown Live” will be back in Wilkes-Barre on Tuesday, July 17 at 7:45 p.m.

This will be the first time in two years that the Luzerne County arena will host “SmackDown;” the previous event was the historic 900th episode of the series featuring the return of the Undertaker that sold out the venue.

This time will feature a double main event – a WWE Championship Match with AJ Styles versus Shinsuke Nakamura, along with Daniel Bryan and Jeff Hardy versus The Miz and Big Cass.

World Wrestling Entertainment Superstars Samoa Joe, The New Day, Charlotte Flair, Carmella, Asuka, Becky Lynch, Naomi, Shelton Benjamin, Cesaro and Sheamus, The Usos, and more are scheduled to appear at this event, though the lineup is subject to change.

Offering “the best value in entertainment,” tickets start at $20. Tickets go on sale this Friday, May 11 at noon and will be available at the NBT Bank Box Office at the arena (255 Highland Park Blvd., Wilkes-Barre), ticketmaster.com and all Ticketmaster outlets, and charge-by-phone at 1-800-745-3000.