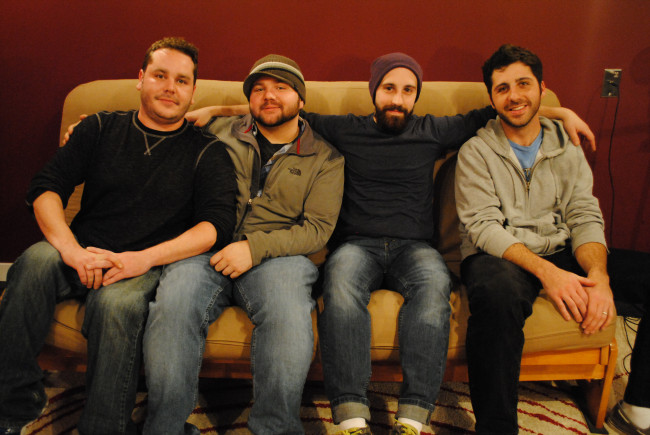 Scranton indie rock favorites Blinded Passenger will reunite at the fifth annual Electric City Music Conference after a two-year hiatus. While vocalist Patrick McGlynn and drummer Steve Werner often collaborate on acoustic solo and side projects, the reunion will bring the full band back together.

“Reunions are always fun, so I keep a short list of bands that I reach out to every year and try to set up reunions. This year, I was thrilled when the guys from Blinded Passenger agreed to do it,” explained ECMC co-organizer Joe Caviston.

Born and raised in Scranton, singer/songwriter Patrick McGlynn writes songs that examine life and dreams fueled by the times we live in.

Featuring Steve Werner on drums, Stefan Ogonosky on guitar, and bassist Kevin Stone, BP draws influence from artists like Bruce Springsteen, Foo Fighters, and Saves the Day to deliver a sound crafted over the past several years in the bars and clubs of Northeastern Pennsylvania, striving to take the next step forward with a mission to write songs that people see themselves in.

The band was one of the first guests on the original incarnation of the NEPA Scene Podcast, where they dove deep into their music and friendships while telling many funny stories in Episode 3:

In addition to the reunion announcement, the ECMC released the names of 30 additional bands that will be performing at the festival following April’s announcement of 50 other acts.

“We’re pretty excited to go international,” co-organizer Ken Norton noted. “I believe Widmore is our first band from Canada to perform at the conference.”

Nominations for the 2018 Steamtown Music Awards will close this Sunday, June 17, so fans are reminded to get their nominations in at electriccitymusicconference.com/awards.

The Steamtown Music Awards will kick off the 2018 Electric City Music Conference on Thursday, Sept. 13, and the rest of the conference takes place on Friday, Sept. 14 and Saturday, Sept. 15 with live music and an educational component with industry professionals.

See NEPA Scene’s photos from the 2017 Steamtown Music Awards here and the entire Electric City Music Conference here. Stream or download last year’s panel discussions as free podcasts here and listen to Caviston and Norton talk about the conference and the awards in depth in Episode 26 of the NEPA Scene Podcast: