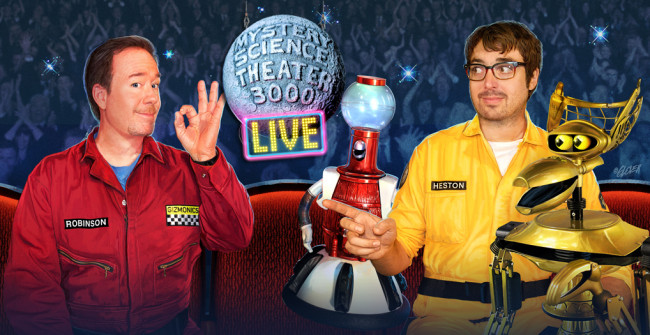 After an incredibly succesful tour in 2017, groundbreaking television comedy series “Mystery Science Theater 3000” has announced the MST3K Live 30th Anniversary Tour featuring, for the first time in 25 years, original host and “MST3K” creator Joel Hodgson back in the red jumpsuit as Joel Robinson.

Alongside new “MST3K” host Jonah Heston (Jonah Ray) from the Netflix revival, Joel, Jonah, and the Bots will bring new movies and all new riffs and sketches live to stages across the United States this fall, including at the F.M. Kirby Center in Wilkes-Barre on Saturday, Oct. 27 at 5 p.m.

Of this upcoming tour, Hodgson says, “The craziest and most exciting thing for me is that I am putting on my old jumpsuit and will be riffing live, shoulder to shoulder with Jonah, Crow, and Tom Servo for two incredibly strange feature films. I’m going to have to go into training to get caught up to the skill level of Jonah and this new cast. If you saw last year’s tour, you have some idea just how talented these young movie riffers are.”

The Mystery Science Theater 3000 Live 30th Anniversary Tour consists of two separate, completely unique shows. Each event will include all the things expected from an “MST3K” experience: a cheesy B-movie, hilarious riffing, wisecracking robots, silly sketches, plus – for the first time – Joel and Jonah riffing together side-by-side. Both shows feature movies never before seen on the “MST3K” series. The show at the Kirby Center will be “The Brain,” a Canadian science fiction suburban nightmare.

“If the tour is coming anywhere near your town and you consider yourself an ‘MST3K’ fan, you absolutely owe it to yourself to get a ticket,” Geek.com wrote.

Following its record-breaking #BringBackMST3K Kickstarter campaign, the inaugural new season of “Mystery Science Theater 3000” launched on April 14, 2017 exclusively on Netflix and earned a critics’ rating of “100 percent fresh” on Rotten Tomatoes. The New York Times hailed, “At last, a revival of something actually worth reviving… a different cast but the same outlook and style – and mercifully, the same reliable, giddy humor.”

“MST3K is just as hilarious as ever in rebooted form, turning its bemused eye on old, schlocky fare for some good, old-fashioned riffing,” raved Vanity Fair. And Nerdist said, “The references are updated, the sets are snazzier, but the heart and soul of ‘MST3K’ certainly remains intact.” In November of 2017, it was announced that Netflix was renewing the series, and the second season will air “in the not-too-distant future.”

For almost 30 years, the award-winning comedy television series “Mystery Science Theater 3000” has been known as one of the top cult TV shows of all time. The story of a human host and his robot sidekicks trapped aboard a satellite and forced to watch cheesy movies by their captors, “MST3K” has maintained its reputation thanks to its fervently devoted fan base, known as MSTies.

Created by Joel Hodgson, the first season of “MST3K” aired in 1988 on KTMA-TV in Minneapolis. Set on the Satellite of Love, the series follows a hapless host trapped by mad scientists on a satellite in space who is forced to watch some of the most outrageously unfortunate B-movies ever created. To keep sane, he’s built two robot sidekicks, and together they do a running commentary on the films, affectionately mocking their flaws with inspired wisecracks and acting as a lively movie theater peanut gallery.

“MST3K’s” national broadcast life began in 1989 on the Comedy Channel (later to become Comedy Central), where it ran for seven seasons. The show’s final three seasons aired on the Sci-Fi Channel. Series creator Hodgson originally played the stranded man, Joel Robinson. When he left in 1993, series head writer Mike Nelson replaced him as the new B-movie victim and continued in the role for the rest of the show’s run. The format proved to be popular, and during its 10 seasons and 197 episodes on Comedy Central and the Sci-Fi Channel, it attained a loyal fan base and critical acclaim, including a Peabody Award and two Primetime Emmy nominations.

In late 2015, Shout! Factory and Hodgson formed a new partnership known as Satellite of Love LLC to acquire the global IP rights to “MST3K” with the aim of producing new episodes and managing and developing the IP in other areas. The highly successful Kickstarter campaign to #BringBackMST3K spearheaded by Shout! Factory and Hodgson surpassed its goal by funding the production of 14 new episodes and set the world record as the highest-funded film and TV crowdfunding campaign in history. The new episodes of “MST3K” debuted as a Netflix original series. 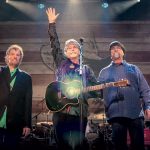