It was announced today that stand-up comedian, actor, writer, and political activist Eddie Izzard will bring his Believe Me Tour to the F.M. Kirby Center in Wilkes-Barre on Tuesday, Oct. 2 at 7:30 p.m.

Over the course of a 30-year career, Eddie Izzard has proved himself to be a creative chameleon, inhabiting the stage and film and television screen with an unbelievable fervor. Born in Yemen and raised in Northern Ireland, Wales, and England, he lost his mother at the age of 6 and that has affected the rest of his life.

In his teens, he dropped out of university and took to the streets of London as part of a comedy double act. When his partner went on vacation, Izzard kept busy by inventing a one-man escape act, and thus a solo career was ignited. As a stand-up comedian, Izzard has captivated audiences with his surreal, stream-of-consciousness comedy – lines such as “Cake or death?” “Death Star Canteen,” and “Do you have a flag?” have the status of great rock lyrics.

As a self-proclaimed “action transvestite,” Izzard broke a mold performing in makeup and heels and has become as famous for his “total clothing” rights as he has for his art.

He is touring his Force Majeure show – so far in more than 40 countries worldwide and in four languages: English, French, German, and Spanish. With his brand of keenly intelligent humor that ranges from world history to historical politics, sexual politics, mad ancient kings, and chickens with guns, he has built an extraordinary fan base that transcends age, gender, and race.

Released on June 13, 2017, Izzard’s first book, “Believe Me: A Memoir of Love, Death, and Jazz Chickens,” is a New York Times Best Seller. Writing with the same candor and insight evident in his comedy, he reflects on a childhood marked by the loss of his mother, boarding school, and alternative sexuality, as well as a life in comedy, film, politics, running, and philanthropy.

Arguably one of today’s top comedians, Izzard can also be seen co-starring opposite Judi Dench as her son Bertie, the king in waiting, in the critically acclaimed film “Victoria and Abdul.” The film premiered at the Venice Film Festival on Sept. 3, 2017 and opened to the public on Sept. 22, 2017. He had a starring role in the television series “The Riches” as Wayne Malloy and has appeared in films such as “Ocean’s Twelve,” “Ocean’s Thirteen,” “Mystery Men,” “Shadow of the Vampire,” “The Cat’s Meow,” “Across the Universe,” and “Valkyrie.” He has also worked as a voice actor in “The Wild,” “Igor,” “The Chronicles of Narnia: Prince Caspian,” “Cars 2,” and “The Lego Batman Movie.” 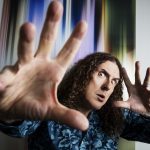