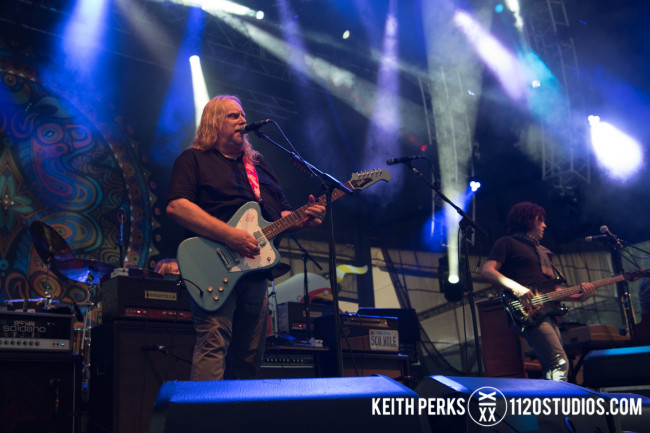 Southern rock jam band Gov’t Mule, in recognition of the 45th anniversary of the release of Pink Floyd’s legendary signature album “The Dark Side of the Moon,” will interpret some of Pink Floyd’s most iconic and beloved songs from throughout the legendary band’s career during their “Dark Side of the Mule” set. This audio and visual spectacular celebrating the incredible music of Pink Floyd is planned for midnight on Saturday, July 21 at the Peach Music Festival at The Pavilion at Montage Mountain in Scranton.

“’Dark Side of the Moon’ is one of the most prolific albums of our time,” said Warren Haynes of Gov’t Mule. “Those songs transcend time, and it will be an honor to pay tribute to Pink Floyd and their music during our set at the Peach. I look forward to being on stage and joining the many thousands who will trek to Scranton for a fantastic weekend of live music.”

For these rare “Dark Side” sets, Gov’t Mule’s core lineup will be augmented by several additional musicians. On Sunday, June 22, Haynes will perform his “Wake Up with Warren Haynes” solo set before closing out Peach Fest later that night with an epic Gov’t Mule set.

Haynes has been recognized as a cornerstone of the American music landscape and revered as one of the finest guitar players in the world. Throughout his prolific career as part of three of the greatest live groups in rock history – The Allman Brothers Band, Gov’t Mule, and The Dead – his virtuosic artistry has led to thousands of unforgettable performances and millions of album and track sales.

Billed as the first-ever Allman Brothers-inspired music festival in Northeastern Pennsylvania, the Peach Music Festival attracts thousands of people each year. At the Peach, festival-goers can shop at the many food and craft vendors on the grounds or enjoy free access to the Montage Mountain Ski Resort’s large water park. Camping and RV parking is also offered on the grounds.

The first Peach Music Festival was inspired and created by The Allman Brothers Band and Live Nation Entertainment in 2012 and is held annually at The Pavilion at Montage Mountain (1000 Montage Mountain Rd., Scranton) and Montage Mountain Waterpark. Last year’s Peach boasted fans from all 50 states and 13 countries from around the world.

Preeminent American rock band Gov’t Mule – Grammy Award-winning vocalist, songwriter, guitar legend Warren Haynes (vocals, guitar), Matt Abts (drums), Danny Louis (keyboards, guitar, and backing vocals), and Jorgen Carlsson (bass) – has galvanized a global fan base with their music, leading them to be recognized as one of the most timeless, revered, and active bands in the world whose spot among rock titans remains unshakable.

Gov’t Mule has showcased their virtuosity, intelligence, and breadth over the course of 16 studio and live albums, millions of album/track sales and streams, and thousands of performances. Celebrated as one of music’s most treasured storytellers, Gov’t Mule’s frontman Warren Haynes is lauded as one of the most formidable guitarists and vocalists of the modern era. A cornerstone of the American music landscape, he has brought his artistry to three of the greatest live rock groups.

Gov’t Mule’s acclaimed 10th studio album, “Revolution Come… Revolution Go,” is out now on Fantasy Records. Spanning rock, blues, soul, jazz, and country, the album showcases the band’s evocative songwriting, incendiary playing, and timely lyrical commentary. Gov’t Mule will be taking their “Dark Side of the Mule” set on the road amidst their summer tour during a co-headlining run of six amphitheater dates with The Avett Brothers.