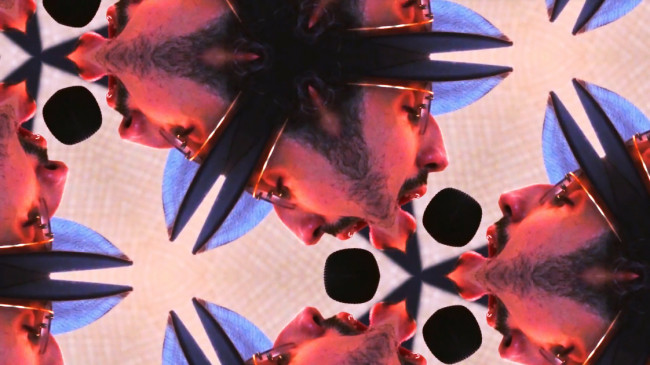 Jordan Ramirez is well-known in the local music scene for his soulful voice and funky rhythms in Wilkes-Barre bands Half Dollar and Fake Fight, and with solo shows all over Northeastern Pennsylvania and the recordings and music videos he makes through Going Up? Records, you’d think that he couldn’t possibly have anything else up his sleeve, but his creativity continues to flow with a newly formed group that is set to officially debut as “Jordan Ramirez & The Tribe” next weekend at the River Street Jazz Cafe in Plains.

Leading up to the event, Jordan Ramirez & The Tribe are premiering three brand new music videos on NEPA Scene today that offer an early listen and kaleidoscopic view of the band that oozes all the foot-tapping, head-bobbing soul, R&B, jazz, funk, and hip-hop you can handle in one sitting.

“I had an opening slot at the Jazz Cafe performing with a touring band, Bumpin’ Uglies, a week after a Fake Fight show and a week before a Half Dollar show. Plain and simple, Bumpin’ Uglies just bring it too hard and I didn’t want to sing sad songs with an acoustic guitar that night,” Ramirez told NEPA Scene.

“At the time, three of the guys had already reached out to just get together and jam over the months, so I did a little searching for our last guy and found him in minutes. The whole thing began to take off in a very serendipitous way… but after the show, we realized there wasn’t much coincidence to us jiving, and it really seemed to be one of those things that had to happen. Thankfully, we got offered another show.”

Those guys are Tyler Dempsey on drums, Ross LeSoine on the saxophone, Michael Wintermute on bass, and Andrew Sauter on guitar.

“Andrew and I had been trying to jam for over a year, and he’d reached out to me through my Going Up? Records page, which is all about collaboration. I ended up jamming with Tyler at an open mic of sorts, and we’d talked about jamming again. Ross and I just got coffee one time and were talking about doing something new; I was like, ‘Let’s just start with one date.’ Then I posted to Facebook to find a bass player and found Mike. Finally, I made a group chat on Facebook and pitched them the idea. To my delight, they were all in. It was way too easy, almost as though it was facilitated by a higher power.”

The results speak for themselves in the songs “Baby, Hold onto Me,” “Hip-Hop,” and “Wack Boy.”

“‘Baby, Hold onto Me’ details the process of a couple coming together and enjoying the fruits of new love. They then realize promptly that they are hurling through space on a flying globe and things become much more complicated,” Ramirez said.

“‘Hip-Hop’ is a critique about the ways in which people think in regards to music and art and the criteria they use to judge whether or not something is intellectually worthwhile,” he continued.

“‘Wack Boy’ is about a boy who struggles with his peers’ reception of his true personality. He changes something and no longer recognizes himself. At his lowest point, he – through spiritual means – finds a way to look at the glass half-full,” he explained.

Recorded in his apartment, the videos’ trippy visual style and multiple cuts and angles were achieved using a single DSLR and two GoPros set up around the room. The Tribe only had an hour and a half to rehearse for their first show, so they set up the mics and burned through all their songs, recording a quick EP in the process.

“We’d framed the session as a means of rehearsing and we’d never planned on making an EP out of the recordings, but we really liked how they sounded,” Ramirez noted.

“I love editing videos in weird ways. I have no formal training, but I was given the opportunity at my old job at PSC in Wilkes-Barre to do video editing. It’s something I really began to enjoy. Once all the files get into their respective bins and I realize that nothing was corrupted or lost in terms of video or audio, I’m happy as can be.”

Music is in his blood and has made him happy from an early age.

“My uncle used to perform around the area in a duo, before I was old enough to get into bars. My brother and I asked him to show us some chords one day when I was about 10, and he wrote some down on a sheet of paper. We both started playing every day, and for some reason, before I was ever even close to being a competent guitar player, I started stringing together chords to write songs; for some reason, that was always the objective,” he recalled.

While Half Dollar and Fake Fight remain active, Ramirez saw something new form in between those acts.

“In the past year, I’ve written a bunch of songs for both bands, and I realized that – as a songwriter – you bring the raw materials and the band makes the songs complete, and it’s a beautiful thing. The personality of a band really comes through the final product,” he observed.

“I’d been producing new solo music at the time – after not doing this for over a year – and was hoping to find some willing players to learn the songs. Nobody was bargaining for anything more than a single show, so the pressure was off. When we got a good response – and, further, I realized that the songs took on a life of their own with these guys due to their jazzy improv – it just made sense to keep going. The songs themselves have a more definitive and universal theme than past songs I’ve written as well. Everything seems to be revolving around the subjects of faith, love, and the simple joy of a stank-face groove.”

Those groovy sounds will be available on a limited edition seven-song EP that will only be available at their upcoming headlining show at the River Street Jazz Cafe (667 N. River St., Plains) on Saturday, Aug. 4 with special guest Doghouse Charlie.

“Because we were so happy with how those throwaway recordings turned out, we just decided to get them printed. We have 100 CDs that we’re giving away for free to the first 100 people who come to the Jazz Cafe August 4th,” he said.

“It’s the only way that you’re going to get the CD. None will be for sale after the fact.”