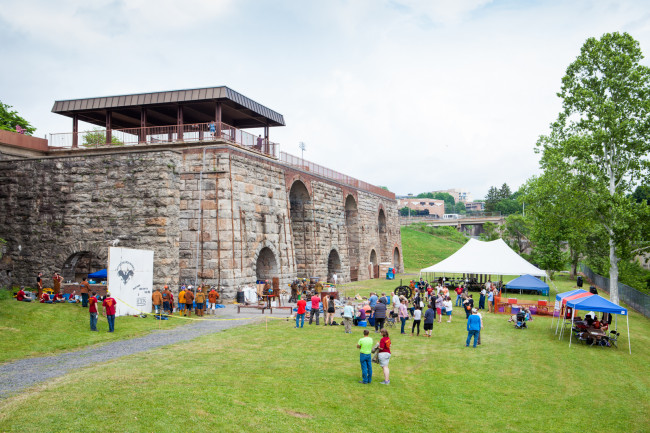 Last month, local concert production company DamnMillennial! Promotions revealed that they will present a series of outdoor shows at the Scranton Iron Furnaces in downtown Scranton. The first one was announced was the Alt 92.1 Furnace Frenzy headlined by the Dirty Heads on Saturday, July 21, and now three more shows have been added.

The first chronologically is with Scranton pop rock band Black Tie Stereo and Daddy-O and the Sax Maniax on Friday, July 20 at 7 p.m., presented by Alt 92.1. Tickets, which are $10, can be purchased online via Eventbrite.

Blending together influences of pop, rock, and funk, Scranton-based four-piece Black Tie Stereo are bringing a unique flair to the music world. Though its members had all taken part in different projects before, they came together in 2014 to create an upbeat and exciting sound comparable to the likes of ​Maroon 5 or Young the Giant.

The group released their debut self-titled EP in 2014, a fervent and definitive expression of all their unique influences. They followed it up in 2017 with their newest EP, “DoYou,” produced by Mark Mazzetti (A&R and production for Sting, Janet Jackson, John Mayer) and recorded and mixed by Brian Scheuble (U2, Sheryl Crow, Elton John). This was the first multi-song effort the group released since current guitarist/trumpeter Jesse Morvan joined the band in 2015.

The band has racked up some impressive accolades over the years, including Best Pop/Top 40 Act at the Steamtown Music Awards in 2016. Additionally, they’ve played a variety of festivals, including FuzzFest in Scranton, Penn State’s THON, and Musikfest in Bethlehem, and have opened for powerhouse acts such as Milky Chance, Panic! at the Disco, Weezer, Andrew McMahon in the Wilderness, K.Flay, and Lewis Del Mar.

Delivering high-energy live shows unlike anything else, Black Tie Stereo thrives on the dynamism of their audiences. Coming from a history of being part of various cover bands, the group knows exactly what makes an audience tick and how to get them in the right groove.

Their exciting band dynamic, which was defined by Atwood Magazine as “power pop synergy,” proves them to be a driving force in the new sphere of alt rock music, and their continued growth over the last few years is reflective of that.

The next Iron Furnaces concert is with New York City’s ultimate ’80s tribute band, Jessie’s Girl, on Friday, Aug. 17 at 7 p.m. with special guest Manny Cabo of “The Voice,” presented by Rock 107. Tickets, which are $22-$25, can be purchased online via Eventbrite.

The last concert announced is the Pink Floyd Laser Spectacular on Saturday, Aug. 18 at 7 p.m., also presented by Rock 107. Tickets, which are $25-$40, can be purchased online via Eventbrite.

The Pink Floyd Laser Spectacular presents the original music of Pink Floyd like you’ve never seen before. Experience all of their hits, along with deep tracks, accompanied by the iconic psychedelic images and visuals that are the band’s hallmark.

The perfect show for classic rock fans young and old, the Pink Floyd Laser Spectacular combines the music you’ve loved for years with today’s most advanced entertainment technology to create a rich, lush, sensory experience not to be missed.

More show announcements at the Scranton Iron Furnaces (159 Cedar Ave., Scranton) are expected soon. The Alt 92.1 Furnace Frenzy is all ages, while the other concerts are 21+. A cash bar will be available at every show.

See NEPA Scene’s photos of Black Tie Stereo performing at The Leonard in Scranton back in 2016 here.