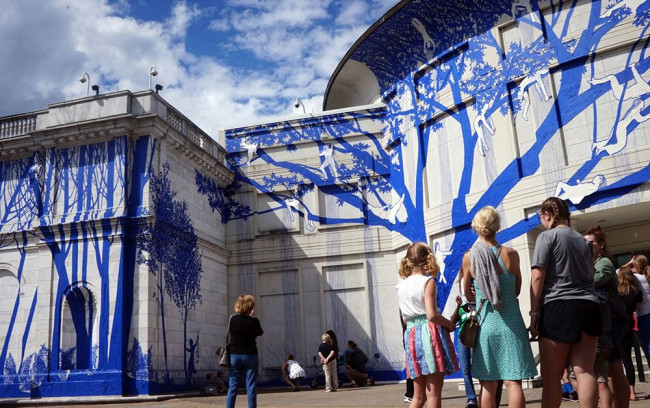 The Sordoni Art Gallery at Wilkes University will present the Tape Art Crew, a team of artists from Rhode Island, from Tuesday, July 17 through Friday, July 20.

The Tape Art Crew will create a temporary mural on the facade of the Sordoni Art Gallery building (141 S. Main St., Wilkes-Barre) entirely out of tape during their micro-residency on campus. See the mural evolve and talk to the artists anytime during those four days.

In addition to exhibition hours at the gallery, a mural celebration will take place from 5 p.m.-8 p.m. on July 20 during downtown Wilkes-Barre’s Third Friday Art Block. The Art Block will be alive with vendors, food trucks, and live music from Rockology Music Academy. The public is invited to join the artists in a celebratory teardown of the mural at 7:30 p.m.

The Tape Art Crew is an evolving group of public artists founded in Providence, Rhode Island in 1989. They were the first artists to consistently use tape as a primary medium for creating large-scale drawings and installations. They have been called the inventors of tape art, creating over 500 large murals (40 feet or larger) and thousands of smaller drawings on walls around the globe. Their murals have appeared at the Whitney Museum in New York City; the Brooks Museum of Art in Memphis, Tennessee; and the Revolving Museum in Boston, Massachusetts.

The Tape Art Crew creates murals using “drawing tape,” a low-adhesive paper tape that can be removed from almost any surface without damage or residue. Murals have been constructed on wood, cement, brick, metal, tile, glass, stone, painted wall, stucco, and plaster. The artwork is intentionally temporary. Regardless of how much time it takes to create, every mural is removed within 24 hours of its completion.

The Luzerne Foundation and Visit Luzerne County partnered with the Sordoni Art Gallery and the Third Friday Art Block to bring the mural project to Wilkes-Barre.

The $3 million, 7,000-square-foot Sordoni Art Gallery is a culmination of a gallery revitalization plan to enrich the arts for students, faculty, and staff while contributing to cultural life in the local community. More than double the size of the former gallery, the new space opened in 2017 is outfitted for high-end national art exhibitions and includes versatile opportunities for teaching and learning. The gallery shares space with the Karambelas Media and Communication Center.

The Sordoni Art Gallery is open Tuesday-Friday from 10 a.m.-5 p.m., Thursday from 10 a.m.-7 p.m., and Saturday and Sunday from noon-5 p.m. It is closed on Mondays and university holidays. All Sordoni exhibitions and events are free and open to the public.