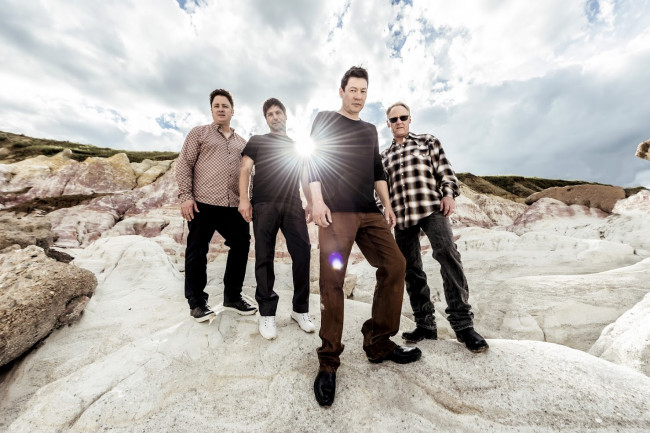 It was announced this week that Colorado rock band Big Head Todd and the Monsters, best known for hits like “Broken Hearted Savior,” “Bittersweet,” and “Circle” from their platinum-selling 1993 album “Sister Sweetly,” will bring their fall tour with Los Colognes to Penn’s Peak in Jim Thorpe on Thursday, Nov. 8 at 7:30 p.m.

Tickets, which are $25.50 in advance and $30 the day of the show, go on sale this Friday, Aug. 10 at 10 a.m. at ticketmaster.com and all Ticketmaster outlets, the Penn’s Peak box office (325 Maury Rd., Jim Thorpe), and Roadies Restaurant and Bar (325 Maury Rd., Jim Thorpe). Penn’s Peak box office and Roadies Restaurant ticket sales are walk-up only; no phone orders.

After passing the three-decade mark with the same core lineup, an achievement few other name-brand bands can boast of, Big Head Todd and the Monsters released their 11th studio album, “New World Arisin’,” in 2017, which makes good on its forward-facing title with what might be the brashest rock and roll of their career. The old world can’t rest on any laurels, and neither will they.

“We’re in a real exciting part of our career right now,” says co-founder Todd Park Mohr. “We’re a viable band with a great audience, and we’re able to work at a very high level. It’s a career that’s getting more and more interesting, rather than less, which is remarkable,” he says, chuckling at the unlikelihood of anyone being this cheerfully all-in, this far in.

“I mean, 30 years into it, I really feel like, ‘Wow, this is getting fun.’ I’m learning more about music and about my instrument, and it’s just really engaging in every way. We also dovetail well with the times, I think; I feel like we have something to say.”

That desire to communicate and connect is very much reflected in a new album that explores a variety of subgenres, from the funky (“Trip”) to the unexpectedly punky (“Detonator”), with stops along the way for raging country rock (“Damaged One”), expansive storytelling in the Van Morrison/early Springsteen mode (“Wipeout Turn”), a Jimi Hendrix cover (“Room Full of Mirrors”) and, in the title track, “New World Arisin’,” a Charley Patton-inspired tune that ended up having what Mohr describes as “a heavy metal/gospel feel.”

He doesn’t feel these musical zigzags will give fans musical whiplash. “The fact is, most people, like myself, listen to multiple genres of music, so I don’t think people have a problem with variety. I love it.”

But if there’s a dominant musical motif to “New World Arisin’,” it’s “straight-up rock pop,” says Mohr. That contemporary approach might come as a slight surprise to hardcore fans that saw the Monsters take a seriously rootsy turn or two in the last 10 years. The band embarked on a side project, dubbed Big Head Blues Club, that saw them paying homage to Robert Johnson and bringing in venerable guest collaborators like Charlie Musselwhite and the late B.B. King. The heavy blues influence that dominated their alter ego band carried over some into the last actual Big Head Todd and the Monsters album, 2014’s “Black Beehive.” That element isn’t altogether missing in “New World Arisin’;” you’ll certainly hear it recur in “Long Coal Train.” But this time the blues take a definite back seat to the unapologetically mainstream instincts that had Big Head Todd going platinum in the mid-’90s with the album “Sister Sweetly,” which spawned the rock radio hits “Broken Hearted Savior,” “Bittersweet,” and “Circle.”

“Commercial success is still a goal for me and for our band,” Mohr says, “as far as the sense of communicating to, or striking a chord with a large number of people. We feel like we have something to say and something to offer the culture.” Plus, a true confession: “I’m interested in the pop song! And I think ‘Damaged One,’ for one, is a classic pop song. Our label would have killed for that song back then,” in the wake of those mainstream radio hits that established the band. “They begged me to write it! So there’s a lot of irony in our coming back to that.”

The history of the group actually stretches farther back from the 1987 point at which they took their name. The core members came together at such an early age that it’s hard to know exactly how many candles to put on their collective cake. “It’s murky,” Mohr says, “because I’ve been playing with Brian [Nevin, their drummer] since junior high school, so the two of us go back to 1982. Brian and I played a talent show with Rob [Squires, the bass player] in 1983, and then we continued to plug at it, at a kids’ pace,” he laughs.

They began playing original music in earnest in a nascent Colorado music scene that then consisted almost entirely of cover bands. A debut album, “Another Mayberry,” arrived in 1989, though it would be another four years before “Sister Sweetly” made them a national phenomenon. The only personnel change in these three decades has been the addition of a fourth member, putative “new guy” Jeremy Lawton, in 2004.

While they enjoy a robust fan base around the country, their success is outsized in Colorado, where they’re practically the unofficial state band. That’s evident in their ability to sell out Red Rocks, the most revered amphitheater in the nation, where they’ve headlined 19 times. It also comes into play when the band gets asked to be a part of commemorative moments. Mohr recently sang the national anthem at a Rockies game, and the entire band took part in the parade through Denver after the Broncos took the Super Bowl.

Their honors extend beyond their home state and even home country… into space. In 2005, they released the single “Blue Sky,” a tribute to the space program, written at the behest of crew members taking to the heavens aboard the space shuttle Discovery; it was performed years later as a live wake-up call to the astronauts on the shuttle. The song had enough appeal back on Earth, too, that it was picked up by the Hillary Clinton campaign in 2008 and used to introduce her keynote speech to the Democratic convention.

That campaign usage didn’t come about as a result of any desire on Mohr’s part to take the band in a political direction. He’s not so interested in getting Big Head Todd and the Monsters caught up in that particular fray as looking at the smaller and bigger pictures, wanting to keep the material topical in some far deeper fashion.

“Our audience is America, and I’m guessing it breaks down to the same percentages the country itself has,” he says. “We’ve never gotten in the business of polarizing people politically. But at the same time, as artists, it’s our job to observe and to hopefully find some insight. I’ve always been interested in the human condition more than politics. Politics are a part of it, but I always look at conflict as personal before it’s political. And I would consider conflict my dominant lyrical theme now – how people are trapped in it, and how conflict relates to intimacy and pleasure.”

A Big Head Todd show, in any case, is a place where those conflicts might resolve or dissolve. “In talking about our apolitical-ness, I think unity is an important thing,” Mohr says. “Being a human being, you have a lot in common with other human beings, and why not maximize those things? Music has an incredible capacity to convey other cultures and times, and to create a lot of empathy and togetherness. There’s harmony in it, and it implies oneness – the root.”

There’s an economy to the songs on the new album, most of which clock in around four minutes, and sometimes even closer to three. You’d think this would make Big Head Todd and the Monsters the farthest thing from a jam band, yet they have a fervent following among that subset of rock fans, lack of noodling notwithstanding. Maybe it’s because of the changing nature of their setlists, since the Monsters are known to take requests, both in person and online.

“Our focus has always been on serving the song,” Mohr says. “We haven’t historically been that jammy. Which isn’t to say that we don’t have an occasional six-minute number – we do. But having said that, I have a great respect for that audience, which I think is just a music-loving audience. You know, one year I got invited to the Jammies at Carnegie Hall, and I got in a discussion with somebody: ‘Well, how do you define a jam band?’ And he told me, ‘A jam band doesn’t repeat a song for three shows in a row.’ That was the only way that he would define it. I could almost follow that rule, except there are probably four songs I have to play every night. So I guess those four songs are what’s keeping us from ever being a jam band,” he laughs.

What’s clear is that Big Head Todd is one multi-headed rock monster, easily traversing the most accessible hooks and the heaviest grooves. It’s not surprising that they would appeal to any audience or sub-audience that values durability over flavors of the moment. But Mohr has to laugh when he thinks about how little the possibility of long-term perseverance was on the members’ minds 30 years ago.

“When you form, I think your goal is to make it through the party on Saturday night,” he points out. “In art, longevity isn’t the goal. It’s a happy accident if it happens, and I think ours was one of those convenient accidents that led to a happy marriage. But we happen to get along really well and love being with each other and playing music for a living.”

Simple as it may sound, that’s a profound recipe for endurance in both the old world and the new.