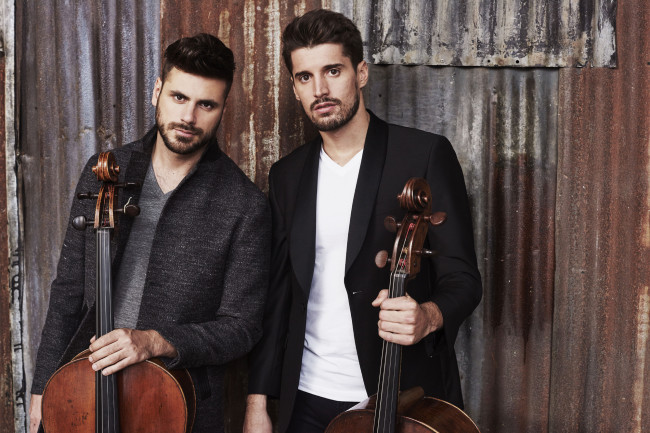 Gearing up for the release of their new album, Croatian/Slovenian cellist duo 2Cellos has announced the dates of their 2019 Let There Be Cello Tour.

They will perform at the Giant Center in Hershey on Friday, March 29, 2019 at 8 p.m. Known for their electric live shows, 2Cellos has played to audiences across the globe and most recently sold over 150,000 tickets on their 28-date U.S. Score Tour in 2017.

This news arrives just before the release of 2Cellos’ latest album, “Let There Be Cello,” on Oct. 19 via Sony Music Masterworks. A follow-up to the 2017 release of “Score,” this record finds the pair exploring a diverse catalog with their signature boundary-breaking playing style. The collection includes their take on everything from the latest pop hits (“Perfect” by Ed Sheeran, “Despacito” by Luis Fonsi) to hard-hitting rock songs (“Eye of the Tiger” by Survivor, “Seven Nation Army” by The White Stripes) to celebrated classics (“Imagine” by John Lennon, “Hallelujah” by Leonard Cohen) to never-before-heard original compositions (“Concept2,” “Cadenza”) for a listening experience unlike any other.

An international sensation since 2011’s rendition of Michael Jackson’s “Smooth Criminal” reached video viral fame on YouTube, Croatian cellists Luka Sulic and Stjepan Hauser, together known as 2Cellos, have since created a name for themselves with their electric and dynamic playing style. Having amassed over one billion streams globally and 750 million YouTube video views in the years since, 2Cellos has taken the cello to unimagined heights as their signature style breaks down the boundaries between genres of music, from classical and film music to pop and rock. The release of “Let There Be Cello” marks their fifth studio album in the wake of their 2011 self-titled debut, “In2ition,” “Celloverse,” and “Score,” all available on Sony Music Masterworks.

The wristband policy will be in effect for this concert. Fans are permitted at the Hersheypark Entertainment Complex beginning at 7 a.m. on Sept. 28. Two hours prior to the on-sale, fans will be directed in front of the Giant Center box office, where they will be issued a numbered wristband. Wristbands are available for one hour and, at the conclusion of that hour, a selected fan will randomly choose a wristband that will determine the line order. Once the line is in place, fans arriving after the wristbands were issued will be escorted to the end of the numbered line.