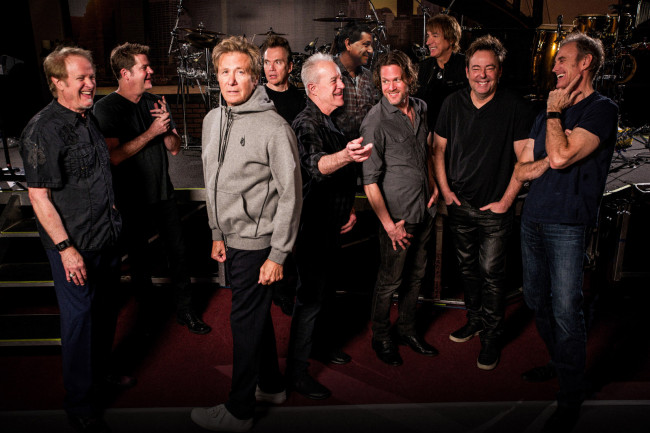 Multi-platinum, Grammy Award-winning classic rock band Chicago, one of the longest-running and bestselling groups of all time, is coming to the Hershey Theatre on Tuesday, April 9, 2019 at 7:30 p.m.

Hailed as one of the “most important bands in music since the dawn of the rock and roll era” by former President Bill Clinton, the legendary rock and roll band with a horn section, Chicago, is the first American rock band to chart Top 40 albums in six decades. From the signature sound of the Chicago horns, their iconic vocalists, and a few dozen of ever-classic songs, this band’s concerts are celebrations. The band is now in their 50th consecutive year of touring, without missing a single concert date.

In March of 2013, Chicago’s multi-platinum two-disc bestseller “The Very Best of Chicago, Only The Beginning” charted at No. 1 on two Billboard charts, the Catalog chart and the Digital Catalog chart, and in Billboard Magazine’s list of Top 100 artists of all time, Chicago came in at No. 13, the highest-charting American rock band. Chicago’s first album, “Chicago Transit Authority,” was inducted into the Grammy Hall of Fame in 2014, and the band performed on the Grammy stage for the first time that year.

Lifetime achievements include a Grammy Award, multiple American Music Awards, a star on the Hollywood Walk of Fame, a Chicago street dedicated in their honor, and keys to and proclamations from an impressive list of U.S. cities. Record sales top the 100 million mark and include 21 Top 10 singles, five consecutive No. 1 albums, 11 No. 1 singles, and five gold singles. An incredible 25 of their 34 albums have been certified platinum, and the band has a total of 47 gold and platinum awards.

For five years, Chicago raised over a quarter of a million dollars to fight breast cancer for the American Cancer Society by having a winning bidder come on stage and sing “If You Leave Me Now” at every concert. The band is also generously supporting many other charitable causes by donating a portion of their ticket sales to organizations such as Kelly Cares, established by Notre Dame head football coach Brian Kelly and his wife Paqui; Hannah and Friends, an organization that serves children and adults with special needs; and the Ara Parseghian Medical Research Foundation, which seeks a cure for a fatal children’s disease, Niemann-Pick Type C.

Robert Lamm and James Pankow have become the latest inductees of the Songwriters Hall of Fame at the organization’s 48th annual induction on June 15 in New York City. These legendary songwriters wrote mega-hits like “25 or 6 to 4,” “Saturday in the Park,” “Feelin’ Stronger Every Day,” “Make Me Smile,” and many others. Chicago has toured every year since the beginning – and they’ve never missed a year.

The wristband policy will be in effect for this concert in Hershey. Fans are permitted on the Hersheypark Entertainment Complex property beginning at 7 a.m. on Nov. 16. Two hours prior to the on-sale, fans will be directed in front of the Hershey Theatre box office, where they will be issued a numbered wristband. Wristbands are available for one hour and, at the conclusion of that hour, a selected fan will randomly choose a wristband that will determine the line order. Once the line is in place, fans arriving after the wristbands were issued will be escorted to the end of the numbered line.