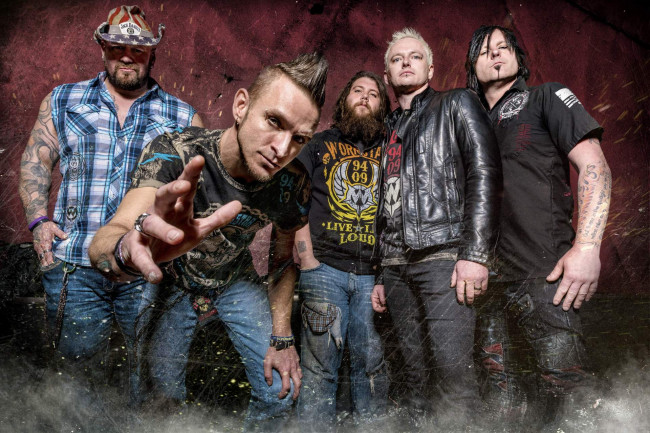 Rock bands Saving Abel and Tantric are hitting the road together in 2019, stopping at Stage West in Scranton on Thursday, March 7 at 7 p.m.

Scranton hard rock and metal bands Graces Downfall, Behind the Grey, and The Holtzmann Effect will open the 21+ concert.

Tickets, which are $22 in advance or $25 the day of the show, are on sale now and can be purchased online via Eventbrite or at the door (301 N. Main Ave., Scranton).

Since forming in 2004, Saving Abel has embodied the definition of “Southern rock.” Even before their self-titled debut album in 2008, they were barnstorming the country making fans everywhere they went, just by being themselves – simple, down-home, charming country boys with talent that was destined to take them straight to the top. The band was signed by A&R wizard Jason Flom to Capitol Records and their first single, “Addicted,” did just that, reaching No. 1 on several charts, and the follow-up singles “18 Days” and “Drowning” helped sell over 750,000 copies of their first record. They toured heavily in support of this album, playing with Buckcherry, Avenged Sevenfold, and Nickelback in arenas across North America. Night after night, the boys would go back to the bus with their ears ringing from thousands of fans screaming their lyrics.

Knowing that they would need something great to follow up with, Saving Abel set out to write their sophomore album on Capitol, “Miss America.” Topping the active rock and hard rock charts yet again with “The Sex Is Good” and “Stupid Girl” solidified their place both on the radio and live on stage. Setting out on their own tour this time, Saving Abel headlined theaters around the country for almost two years nonstop. They toured with several artists and made a lot of friends along the way but always kept their focus on the fans and their eyes toward the future.

Performing nearly 300 dates a year on their own or opening for bands like Three Doors Down, Shinedown, Papa Roach, Seether, Hinder, and Brett Michaels, they bring their Tennessippi sound to intimate bars and festival arenas while supporting autism awareness and military veterans. They’ve traveled to Kuwait, Afghanistan, and Guantanamo Bay as part of USO tours and played festivals such as Rocklahoma, Rock on the Range, Sturgis Throttle Fest, Earthday Birthday, and Daytona Bike Week.

Formed in 1999, Tantric has endured many label and lineup changes over the years, but Ferreira has managed to keep it alive and well. “I consider Tantric a boat that I float in – it’s a vessel that carries the music. So I never feel restrictions. It doesn’t have any rules. Tantric music can be super heavy, light, or both. It’s really an open book with no ending in sight,” he described.

Tantric signed a deal with Pavement Entertainment to release their fifth studio album, “37 Channels,” in 2013. The record maintains the band’s tradition of exploring new directions by integrating diverse influences such as old school country, Southern and classic rock, and Motown with the trademark Tantric sound.

Featured guests on the album include Shooter Jennings, Leif Garrett, Austin Winkler of Hinder, members of 3 Doors Down, Saving Abel, and Uncle Kracker. The album title comes from what Ferreira describes as “what goes on in my brain constantly – 37 things or channels, if you will, all at once vying for my attention.” Typically diverse, the track selection offers unexpected content and also marks a change in Tantric’s structure, establishing it as Ferreira’s ongoing musical project and allowing more freedom for collaborations without deviating from the established sound.