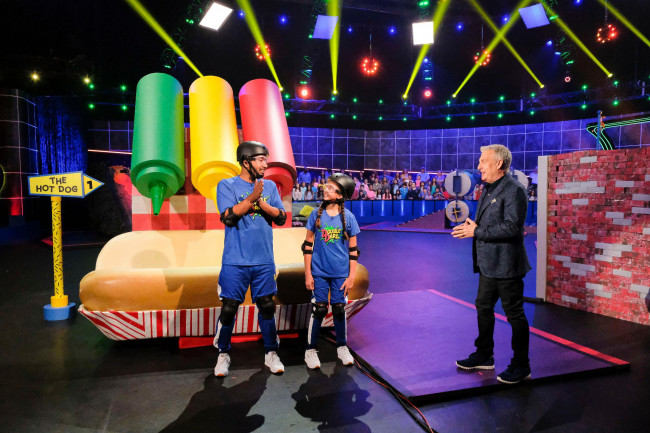 Coming off of a successful fall 2018 tour, “Double Dare Live” – featuring original host Marc Summers and his beloved sidekick Robin Russo – will resume touring on Tuesday, March 26 in Lancaster and will stop at the F.M. Kirby Center in Wilkes-Barre on Friday, April 5 at 7:30 p.m.

When you’ve read, completed, and signed the form, hit “submit” and it will be entered into the database for each city. When you arrive at the venue, go to the registration table to verify that you’ve completed the form and present a valid photo ID and you and any family members that you registered will be given wristbands, which indicate to the show’s host that you are eligible to be a contestant on stage. Wear athletic shoes if you hope to be called on stage.

The highly anticipated return of the “Double Dare” series premiered in the summer of 2018 on Nickelodeon and ranked as the year’s No. 1 new kids show with kids 6-11, while retaining the core adult audience who grew up with the original television show. The new “Double Dare” is hosted by digital creator and actress Liza Koshy, with original host Marc Summers providing color commentary on the challenges and lending his vast knowledge of the game and expertise to each episode.

“Hosting the ‘Double Dare Live’ tour couldn’t be any more exciting, and I look forward to continuing to bring the fun and messiness of ‘Double Dare’ to audiences across the country,” Summers said. “Doing the show again with my sidekick Robin will fulfill childhood dreams of the generation that grew up with us and introduce this classic show to the next generation.”

Several weeks of additional spring tour dates will be announced in the coming weeks.

Nickelodeon, now in its 39th year, is the No. 1 entertainment brand for kids. It has built a diverse global business by putting kids first in everything it does. The company includes television programming and production in the United States and around the world, plus consumer products, digital, recreation, books, and feature films. Nickelodeon’s U.S. television network is seen in more than 90 million households and has been the No. 1 rated kids’ basic cable network for 22 consecutive years.