It was announced today that Grammy-nominated, multi-platinum-selling singer/songwriter Aaron Lewis, who is now known for his country music as well as his breakout hard rock band Staind, will return to the Sands Bethlehem Event Center on Thursday, June 13 at 8 p.m. with acoustic songs and stories on the State I’m In Tour.

Lewis recently wrapped up a series of sold-out dates on his Sinner Tour and is hitting the road again with The Stateliners in support of his upcoming album, “State I’m In.” Country Rebel, the world’s largest country music network, raves, “Lewis’ voice rings out above all the noise and is even more powerful than ever before.”

“My music is very first-person, very autobiographical,” Lewis said. “It’s from my life experiences that I draw inspiration for my songs. This acoustic tour gives me the opportunity to share the stories behind my songs with my fans and play them stripped down, like I wrote them.”

Every pair of tickets purchased includes a copy of “State I’m In,” set for release this April.

A self-proclaimed “Northern Redneck,” Aaron Lewis achieved critical and commercial success with his last album, “Sinner,” earning the No. 1 spot on the Top 200 Albums, Top Country Albums, and Top Digital Albums charts upon release. The 12-track project was voted to numerous “Top Albums” and “Best Of” lists and continues to make an impact over two years later.

With Staind on hiatus after selling millions of records worldwide, Lewis first made his country debut in 2011 with the certified gold single “Country Boy,” followed by the release of his first full-length solo album, “The Road.” “Country Boy” featured Charlie Daniels on fiddle and a booming verse from George Jones as well as Chris Young, striking a balance between classic and modern country.

Lewis’ introspective, personal, and relatable lyrics are proof that country music is about lifestyle and values, not necessarily where you were raised. And as Country Weekly exclaims, “make no mistake, he is a truck-drivin’, gun-totin’ country boy.” Lewis attributes country as something that has always inspired him. Growing up in rural Vermont, the singer/songwriter spent summers with his WWII veteran grandfather hunting and fishing. During that time, he developed a love for the land, the woods, and the simple life, which still permeates everything he does.

And there was one specific soundtrack to those times. “I was raised on country music,” Lewis said. “My grandfather listened to Merle Haggard, Hank Williams, Hank Jr., and all of the greats.”

And those influences are evident on stage in his new songs and in the Staind hits he often performs, such as “Outside,” “It’s Been Awhile,” and “So Far Away.” 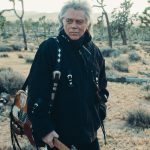