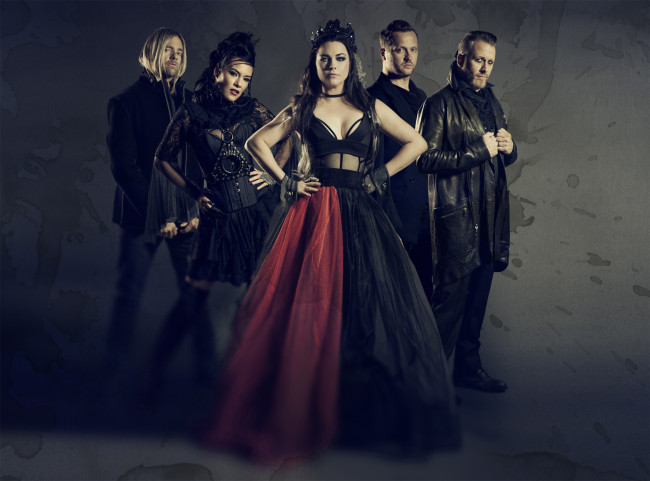 It was announced today that multi-platinum-selling, Grammy Award-winning rock band Evanescence will return to the Sands Bethlehem Event Center on Tuesday, May 14 at 8 p.m.

For Evanescence’s singer, songwriter, and frontwoman Amy Lee, most of her best creative ideas are inspired by dreams, and with “Synthesis” (BMG), the band’s long-awaited fourth studio album (and first since 2011’s self-titled release), it was a case of turning a long-held vision into reality.

Not simply a “greatest hits” album, “Synthesis” takes a selection of Evanescence’s three previous studio releases, along with two new songs, and reimagines them with brand new recordings. It is an amalgamation of Lee’s masterful singing and piano playing, supported by her band, a full symphony orchestra performing arrangements by longtime collaborator David Campbell, as well as an array of electronic music programming and effects engineered by co-producer Will Hunt – not to be confused with the band’s drummer of the same name – and mixer Damian Taylor (Björk, The Killers, Arcade Fire), who also collaborated with the band on the album.

Living up to its name, “Synthesis” is a combination of organic and synthesized sounds, classical and rock, old and new, reinterpreting the past while giving a glimpse into the future, an old-fashioned concept narrative that takes the listener on a journey from darkness into light, offering Lee’s classic inkling of hope in the midst of despair.

“I tend to dream very big,” Lee says about the project. “The whole idea came from thinking about how cool it would be to do new versions of songs with strings and programming, and it just evolved from there. With the skill and experience we’ve developed over the years, plus all of the great minds who came to be involved in the project, it snowballed into something very big, very quickly.”

As their evolution continues, the band embarked on the Synthesis Live Tour, performing the record start-to-finish with a live orchestra and electronic programming in each city, including Bethlehem on Nov. 7, 2017.

“The recording is very much tied to the live experience we want to create,” says Lee. “I’m anxiously excited to play some much more involved, challenging piano for the show, and to focus on singing live more like the way I do in the studio.”

Members of the band won’t just be accompanied by the orchestra, but will be embedded in the joined ensemble as a single unit, a presentation that marks the performance as a true theatrical event, again synthesizing the experience of seeing a classic orchestra in a theater and a band.

The first track to be released from “Synthesis” was a surprising reinvention of their biggest hit, the Grammy-winning “Bring Me to Life,” which eliminates the original rap interlude sung by 12 Stones’ Paul McCoy, substituting an epic widescreen full-color classical take that proves how Lee’s voice has grown into a world-class instrument far removed from the tentative 20-year-old who originally sang on the demo.

“This offered a great opportunity to do the song in the way it was originally intended in some ways,” she says.

With vocals recorded at co-producer Will Hunt’s Spaceway Productions studio in Fort Worth, Texas, and the full orchestra at Ocean Way in Nashville, “Synthesis” isn’t so much an abrupt stylistic departure as it is a flowering of Evanescence’s original approach as a band, which can be heard as far back as the album “Fallen’s” “My Immortal,” “The Open Door’s” “Lacrymosa” (based on Mozart’s “Requiem”) and, from the band’s most recent self-titled album, “My Heart Is Broken” and “The End of the Dream,” which all featured David Campbell’s string arrangements now supplemented with a full orchestra.

Adds Lee, “These songs all have a life beyond the initial studio recordings, so it was really satisfying to go back and sing them as a 35-year-old as opposed to a 20-year-old (for some of them). To be able to incorporate some of those elements that have developed over years of playing them live, and to show ways I’ve grown as well, was a beautiful opportunity. I had to not only make each these new versions better in some way, but also preserve the core of what made the initial performance so great. I really challenged myself.”

With those patented distorted grunge-era guitars and acoustic drums now replaced with a full symphony orchestra and various triggered programming effects, “Synthesis” now spotlights Lee’s incredible voice, truly one of the most distinctive in all of rock, in a way they’ve never been before.

“There’s something beautiful about the intimacy of vocals on this album,” she admits. “The arrangements now make room for those bigger emotions. I used to be afraid to put my singing too far out front, always preferred it pretty deep in the mix. I was a kid when we started, with a lot of insecurities. I never felt I was good enough, but I’ve really become comfortable with my voice. I wanted to try to see how intimate and up-in-your-ear I could get. It’s a challenge not to hide behind anything, but I welcome that. I really look forward to doing the album live.”

As for the rest of the band – guitarists Jen Majura, Troy McLawhorn, and Tim McCord and drummer Will Hunt – each had to fit their own skills into the final product, with Majura taking up the theremin, McLawhorn and McCord experimenting with different sounds, and Hunt triggering a collection of synthesized sounds through an electronic kit.

“This wouldn’t be an Evanescence album without my amazing band,” notes Lee. “They’re all extremely versatile, talented, open-minded artists. It was up to them to figure out how they melded, blended, and created their home in this new world. What can your instrument do that you didn’t realize it could?”

“Synthesis” is not just about updating the past, but offers plenty of future possibilities. The album includes three newly created interstitial instrumentals as well as a pair of new tracks in the previously unreleased “Hi Lo” – a decade-old song that was the very first collaboration between Lee and producer Will Hunt – and the single, “Imperfection,” an EDM-infused funk/hip-hop track that represents the band’s future.

“’Imperfection’ is the most important song on the album for me,” says Lee. “The song had to fit into our body of work but, at the same time, be a classic in its own right. When the lyrics started pouring out of me, I realized it was speaking to all those people we’ve been losing through depression and suicide. I sang it from the perspective of the person left behind. It’s a plea to fight for your life, and that we all need each other as humans. We’re all imperfect, and it’s precisely those imperfections that make us who we are, and we have to embrace them because there’s beauty in those differences.”

Formed in the mid-1990s, Evanescence was integral in establishing a global critical mass in rock music. Their 2003 landmark debut album, “Fallen,” laid the foundation; spending 43 weeks on the Billboard Top 10, it sold more than 17 million copies worldwide and was certified platinum seven times in the United States.

Their debut single and global hit “Bring Me to Life” reached No. 5 on the Billboard Hot 100 as well as marking their first No. 1 hit single in the United Kingdom. The song also became the official theme for “WWE No Way Out 2003.” The equally popular “My Immortal” peaked at No. 7 in the U.S. and U.K., and both songs were featured in the soundtrack for the superhero action movie “Daredevil.” The album produced four singles total, including “Going Under” (No. 5 on U.S. Modern Rock, No. 8 in the U.K.) and “Everybody’s Fool” (No. 36 on U.S. Modern Rock, No. 23 in the U.K.). “Fallen” is one of only eight albums in the history of the chart to spend at least a year on the Billboard Top 50; it spent 104 weeks on the Billboard 200 and is No. 32 on the “Greatest of All Time, Billboard 200” list.

Evanescence has won two Grammy Awards, including Best New Artist and Best Hard Rock Performance out of a total of seven career nominations.

Following multiple worldwide tours, they released their first live album, “Anywhere But Home,” which sold more than one million copies worldwide. Next, the band released their second studio album, “The Open Door,” which went on to sell more than five million copies. Their self-titled third album debuted at No. 1 on the Billboard Top 200 chart, as well as achieving the No. 1 slot on the Rock Albums, Digital Albums, Alternative Albums, and Hard Rock Albums Billboard charts.

“Synthesis” traces the common thread in Evanescence’s catalog, as Lee puts it: “Even in our darkest moment, when we simply say, ‘I hurt,’ hope always exists. It’s about not accepting defeat. Never give-up, never stop fighting for your life.”

As she sings on “Imperfection,” “Don’t you dare surrender / I’m still right beside you / And I could never replace your perfect imperfection.”

With “Synthesis,” Lee and Evanescence have gone back to the future in a way only they can.