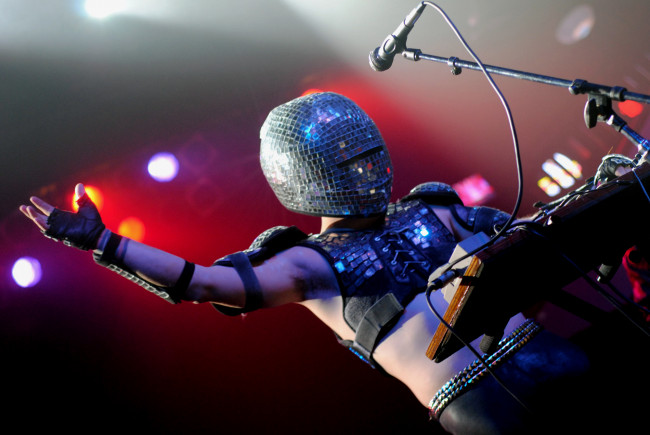 Philadelphia “cyber art rock” band Starwood, who have some local musical connections, will return to Northeastern Pennsylvania to headline a show at the River Street Jazz Cafe in Plains this Saturday, Feb. 9 with New Jersey ska/surf punks Disposable and Scranton “sleaze rock” band These Idol Hands.

Founded with members of defunct but memorable Scranton bands Felix Sarco and Alien Red, Starwood is known for their unique, mesmerizing live performances and the satirical sci-fi backstory embedded in both their music and their otherworldly presentation. They even announce their concerts through “transmissions” on social media:

BEGIN TRANSMISSION [[{SATURDAY NIGHT WE DESCEND UPON THE RIVER ST. JAZZ CAFE. IF YOU FIND YOURSELF IN THE NORTHEASTERN QUADRANT OF THE STATE KNOWN TO YOUR PEOPLE AS “THE KEYSTONE”, DO YOURSELF A FAVOR AND COME TO THIS PERFORMANCE. YOU WON’T BE SORRY. WELL, YOU MIGHT BE SORRY, BUT THAT SOUNDS LIKE A “YOU” PROBLEM.}}] END TRANSMISSION

Starwood, sometimes spelled S.T.A.R.W.O.O.D., is an acronym for “Sociopathic Time Altering Robot Warrior Of Organic Design,” which hints at their professed “history.” Hailing from the Planet Vitrus, vocalist Gabriel Starwood was sent back in time to change history in hopes of preventing his home’s destruction at the hands of future Earthlings. Influencing early man all the way to the present day, he has inhabited the bodies of many important people over the centuries, currently possessing former Felix Sarco singer Gavin Robb who, together with his fellow cyborgs, have formed this band in Philadelphia for the purpose of spreading their message and story to humanity through music.

From “Love Your Lawnmower,” a plea to treat your electronics and machines with more respect before they rise up and enslave humanity, to “Dr. Robespierre’s Cure for the Lonely,” which is to just chop off the heads of the heartbroken, the tongue-in-cheek nature of their material is clear even in their deadpan delivery, but there is more going on underneath the surface for careful listeners.

“My still unfinished mission is to alter the time continuum to limit human expansion in the surrounding galaxies, thus saving Planet Vitrus from the galactic virus known as Humankind,” Robb explained as Gabriel Starwood in a 2012 interview.

“The majority of the Starwood Mission’s rhetoric centers on my past experiences as the wolf in sheep’s clothing, manipulating the endless evolution of man long before the process began. From famous prophets and prostitutes to lowly soldiers and the leaders that send them to die, I have assumed countless roles throughout your history by entering and controlling any mind or body I deem useful.”

If this all sounds strange, it only gets weirder in person with blank-faced metallic masks, a big disco ball-like helmet, and sometimes projected images behind the quintet as they play, but instead of alienating audiences, this is what pulls them in. What keeps them there is eccentric and catchy music that’s fun, danceable, full of energy, and wholly unconventional, conveying surprising emotions while never taking themselves too seriously – and never breaking character.

“It is an exact replication of the lives I have lived and an objective commentary on the past, present, and future I have lived through, all set to the specific tones and signals Vitruvians use to simulate emotion. The story is an integral part of the ‘performance,’ as without it, there is only sound. Inversely, without music, this is nothing more than emotionless theatre,” Robb continued in a robotic voice.

“Having seen your world through the eyes of your most revered historical figures, as well as your outcasts and miscreants, I understand your kind far better than you understand yourselves. I have set these experiences to music to better share my infinitely faceted perspective, with the hope that increasing your self-awareness will keep you from destroying your universal surroundings. Every song is birthed from a life I have lived through someone else’s eyes. Literally.”

Starwood formed in 2011 and has released two albums, “Transmission” in 2012 and “God of the Drones” in 2017, with more music on the way. In that time, they have shaken up their local music scene with consistent performances throughout Philly, including headlining shows and opening slots for national acts like Mindless Self Indulgence.

With Robb and former Sarco bassist Jeff Franklin (replacing ex-Alien Red guitarist Adam Zielinski) among their ranks, the band has maintained their NEPA connection with a few shows, including one with Scranton’s The Great Party at The Legendary Dobbs and several back home, including The Vintage Theater in 2012, the AfA Gallery as part of the 2015 Scranton Fringe Festival, and the River Street Jazz Cafe. They were set to return to the Jazz Cafe last year, but their appearance was canceled due to inclement weather (snow must rust their mechanical parts).

Starwood’s outlandish and original stage show has been sorely missed in the area, particularly by those with more offbeat tastes. For those sick of seeing the same old acts come through NEPA, let these alien rockers beam you up.

“We are programmed to interface with enlightened members of your race,” Robb noted. “Those with a penchant for hyperbole in nomenclature are especially appreciated by our kind.”

Watch NEPA Scene’s videos of Starwood performing at the AfA Gallery in downtown Scranton back in 2015 below: