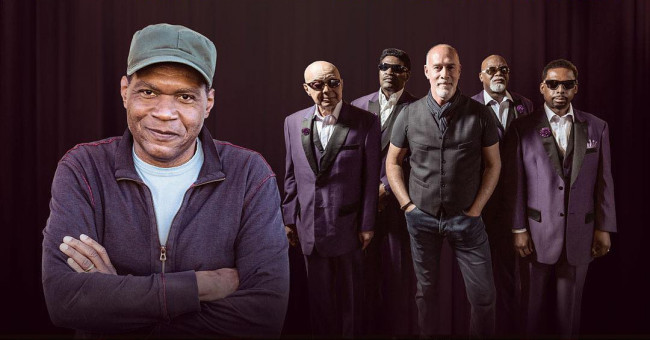 It was announced today that The Robert Cray Band, Marc Cohn with guest vocalists Blind Boys of Alabama, and special guest Shemekia Copeland will bring an ear-pleasing blues/roots package to the F.M. Kirby Center in Wilkes-Barre on Thursday, June 13 at 7 p.m.

Robert Cray has been bridging the lines between blues, soul, and R&B for the past four decades, with five Grammy wins and over 20 acclaimed albums. For his latest project, “Robert Cray & Hi Rhythm,” the Blues Hall of Famer traveled to Memphis with his friend, renowned Grammy Award-winning producer Steve Jordan, to make a classic soul album with Hi Rhythm, the band that helped create that sound. Jordan and Cray met in 1987 while working on the concert film “Hail! Hail! Rock ‘n’ Roll,” a tribute to Chuck Berry.

Growing up in the Northwest, Cray listened to the gospel of the five Blind Boys of Mississippi, Bobby Bland’s soul, Jimi Hendrix’s rock guitar, and The Beatles’ pop sounds. He would bring all of the influences into play throughout his career, but his teenage band was captivated by southern soul and the blues.

The Robert Cray Band’s beginnings did bring the sounds of their mentors into the mainstream, even taking the music of John Lee Hooker, Etta James, and Albert Collins to a larger, younger audience. But no one knew how broad the band’s audience would be until the Cray Band opened the ears of rock radio programmers. With the 1986 release of Strong Persuader the Cray Band’s tunes were put in heavy rotation on mega rock stations across the nation.

In the last decade, the Cray Band recorded seven albums, three of them live, and two – “Twenty” and “This Time” – were nominated for Grammys. The group’s most recent recordings, “Nothing But Love” and “In My Soul,” put the band back on the Billboard charts.

After winning a Grammy for his soulful ballad “Walking in Memphis,” Marc Cohn solidified his place as one of this generation’s most compelling singer/songwriters, combining the precision of a brilliant tunesmith with the passion of a great soul man. Rooted in the rich ground of American rhythm and blues, soul, and gospel and possessed of a deft storyteller’s pen, he weaves vivid, detailed, often drawn-from-life tales that evoke some of our most universal human feelings: love, hope, faith, joy, and heartbreak.

Cohn followed up his platinum-selling debut with two more releases in the 1990s, at which point Time magazine called him “one of the honest, emotional voices we need in this decade,” and Bonnie Raitt declared, “Marc is one of the most soulful, talented artists I know. I love his songs, he’s an incredible singer, and I marvel at his ability to mesmerize every audience he plays for.”

Raitt, James Taylor, David Crosby, Graham Nash, and Patty Griffin all made guest appearances on Cohn’s early records for Atlantic as his reputation as an artist and performer continued to grow. In 1998, Cohn took a decade-long sabbatical from recording, ending in 2007 with “Join the Parade.” Inspired by the horrific events following Hurricane Katrina and his own near fatal shooting just weeks before, “Parade” is his most moving and critically acclaimed record to date.

Shemekia Copeland never holds back. Her instantly recognizable voice – capable of being sultry, assertive, and roaring – delivers every song with unparalleled honesty and passion. Her wide-open vision of contemporary Americana roots and soul music showcases the evolution of a passionate artist with an up-to-the-minute musical and lyrical approach.

With her new Alligator Records album, “America’s Child,” Copeland confidently announces an electrifying new chapter in her constantly evolving story. Produced by Americana Instrumentalist of the Year winner Will Kimbrough (who also plays guitar on the album) and recorded in Nashville, “America’s Child” is a courageous and fiery statement of purpose, a major step forward for the singer whose musical consciousness continues to expand as her star continues to rise.

Copeland has performed thousands of gigs at clubs, festivals, and concert halls all over the world and has appeared on national television, NPR, and in newspapers, films, and magazines. She’s sung with Eric Clapton, Bonnie Raitt, Keith Richards, Carlos Santana, James Cotton, and many others. She opened for The Rolling Stones and entertained U.S. troops in Iraq and Kuwait. Jeff Beck calls her “amazing.” Santana says, “She’s incandescent… a diamond.” In 2012, she performed with B.B. King, Mick Jagger, Buddy Guy, Trombone Shorty, Gary Clark Jr., and others at the White House for President and Mrs. Obama.