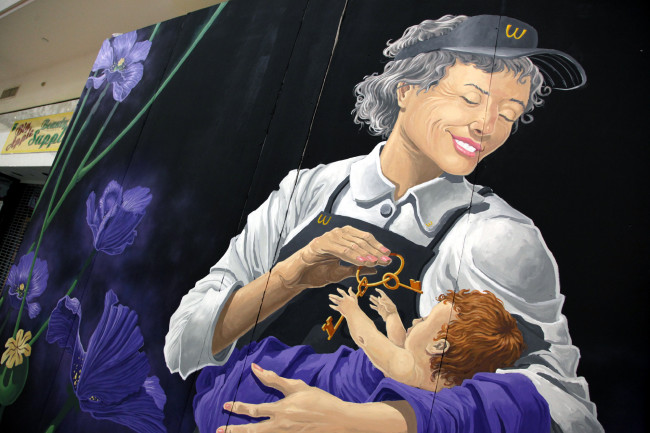 A new eye-catching mural addressing the realities of the opioid epidemic has been installed inside of The Marketplace at Steamtown in downtown Scranton.

Local artist Eric Bussart spray-painted the storefront piece, which addresses an issue that the Department of Health has deemed to be the worst public health crisis in Pennsylvania, disproportionately affecting the greater Scranton area. A recent spike in overdose deaths swept Lackawanna County late last year.

“I’ve been following this issue for some time now, and I find it abhorrent,” Bussart said. “The main challenge in conceiving this concept was trying to illuminate such a serious and morbid issue while still making a beautiful mural that could both provoke thought and brighten the community.”

A recent graduate of the Philadelphia Mural Arts program, Bussart realized that there are many aspects of the opioid epidemic that are misunderstood and overlooked. The mural brings these under-discussed realities to light, depicting a grandmother in a fast food uniform holding her grandchild while surrounded by a field of poppy flowers. 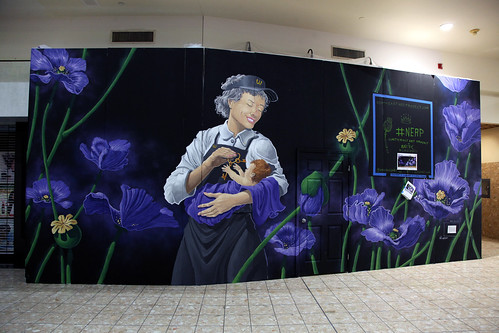 “After a great deal of research, one solution to this problem became clear. I decided to focus on one very specific aspect of the opioid epidemic – the children of addicts are being raised by their grandparents. For a litany of reasons – overdose deaths, rehab, jail, etc. – opiate abuse makes it so that parents can no longer care for their children and, in many cases, the grandparents assume custody of the kids. This puts a huge financial strain on the grandparents. Subsequently, many of them are forced out of retirement and need to rejoin the workforce in order to support their grandkids. To illustrate all of this, I chose to depict a grandmother in a fast food uniform holding her grandchild. She is juxtaposed with an ethereal field of poppy flowers, the source plant of opiate drugs.”

The newly installed mural, “Shedding Light on an Epidemic,” can be found inside the main entrance of the The Marketplace at Steamtown on Lackawanna Avenue, right next to the Electric City Aquarium & Reptile Den. The entire creative process can be seen in a time lapse video posted on YouTube:

“Although the opioid epidemic is very dark and serious, I wanted this mural to ultimately be about love, compassion, and selflessness,” Bussart said. “I set out to conceive a mural that would provoke thought, raise awareness, and possibly even create positive change in the community.”

Bussart, whose other public murals can be seen throughout downtown Scranton and along the Lackawanna River Heritage Trail, lives and works in Northeastern Pennsylvania, donating time and energy to this project to fulfill his training with the Philadelphia Murals Arts program. His work can be seen online at ericbussart.com and on Facebook, Twitter, and Instagram.

The mural was facilitated by the Northeast Art Project, which streamlines the process of implementing and completing public works of art in NEPA. From urban to rural locations, the Scranton organization assists in marrying professional, amateur, and community groups to public projects ranging from community murals to sculptures. With knowledge of both historical and contemporary art, the project hopes to be a catalyst for more public artwork that preserves and enhances the community’s identity and aids in its continued growth.

Those interested in having an artist create a mural inside or outside their business can e-mail admin@northeastartproject.com.

Learn more about local art and the early formation of the Northeast Art Project from NEAP founder Ryan Hnat in Episode 37 of the NEPA Scene Podcast: