For over a decade, Family Animals have established themselves as one of the most experimental and creative bands to ever come out of Northeastern Pennsylvania. Playing an ever-changing mix of psychedelic, alternative, progressive, funk, folk, indie, and punk rock, the Scranton-based trio continues to surprise longtime fans and newcomers alike with each inimitable album, though their latest record may be their most ambitious project yet.

Released independently on Feb. 16, “The End Is Mere” is their first concept album – Jesse Viola (guitar, vocals), Anthony Viola (drums, vocals), and Frank DeSando (bass, vocals) crafted an entire universe of different sounds and colorful characters over the past year in their own Winkhole Studios. The intricate cover artwork by fellow Scranton musician Brian Langan (known for founding and/or playing in bands like The SW!MS, Langor, Kock107, Needle Points, and Sweatheart that have also featured his illustrations), which folds out into four panels on the CD case and also adorns their new merchandise, really brings the whole package together.

“Since January 2018, we have been hard at work creating our new album. January through April consisted of a lot of experimenting in the studio, writing, recording, producing, and mixing the songs ourselves, then getting them mastered at the Windmill Agency by our buddy Eric Ritter,” Anthony Viola told NEPA Scene.

“We spent a lot of time with Brian Langan to get the artwork exactly how we envisioned it. Some of the main characters – The Man with the Diamond Eye, Guitarbot, Captain Z Bop, The Chivalrous Idiot – we had specific ideas for, and many of the others Brian created himself. He was the perfect person for the job, and we couldn’t be happier with the artwork he made. Then we spent the summer filming music videos, learning more about video production, editing them, and building a promotional strategy for the release of the album. In the winter of 2018, we finally worked up enough money to fund the project, thanks to our fans, friends, and family, and released the first video and single, ‘The Modern Life,’ in January 2019.” 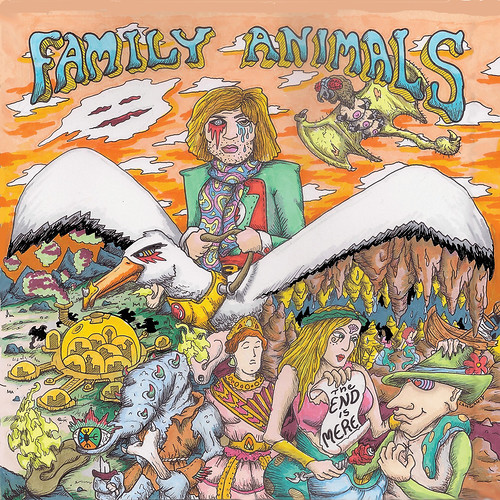 The second music video and single, “Nuclear Confusion,” is premiering today exclusively on NEPA Scene, so we asked the brothers to clarify and clear up any bewilderment regarding the otherworldly trip.

“We chose to make a music video for ‘Nuclear Confusion’ because the song has a lucid atmosphere we thought would be easy to complement with visuals. We are all fans of science fiction, and somewhere along the line, Anthony had the idea to create a sci-fi video. It seemed like an appropriate vibe for the song, so we went with it,” Jesse Viola explained.

“The video actually has almost no relation to the lyrics or meaning of the song; we just love sci-fi and thought this song would fit perfect for a sci-fi video,” Anthony added.

“The concept is an archetypal garage scientist finishing and trying his new invention. Without giving anything away, let’s just say it doesn’t go well. We designed the set and props, directed, shot, starred in, and edited it ourselves, learning a lot about video production along the way. After we were done, we realized many people may take the ‘Who do you think you are?’ line as a bash on science or scientific exploration, but we didn’t mean it that way at all. We are behind science 100 percent, especially those garage scientists – everyone knows they’re the best kind of scientist.”

While they may not be men of science themselves, the song came about through thoughtful experimentation and peer review.

“I had written the chords for the verse years ago and set the idea on the back burner till last year, when we started collaborating more with the songwriting process. The only line I had for the song years ago was ‘you could make a living in space,’ and Jesse liked it and encouraged me to go with it as a theme to the song. So the song is about a sad astronaut, orbiting his planet, wishing he could be home and depressed at the thought that he can’t appreciate the amazing beauty of his surroundings. I wanted it to be relative to the story of the album as whole while still being vague enough to portray underlying themes of loneliness, the beauty of nature, the wants and needs of man, and a kind of ‘never satisfied’ attitude we all might feel. I wrote the verse and Jesse wrote the chorus,” Anthony said.

“The chorus lyrics refer to the idea that we as people often feel like we have the right to judge our surroundings, as if the universe isn’t good enough,” Jesse noted.

Without the constraints of a label or management, Family Animals created “The End Is Mere” their own way at their own pace, informed by years of recording full albums and EPs – and their longlasting friendships.

“The recording process was a blast. Personally, it was one of my favorite experiences as a musician. Being an independent band, we record, mix, and produce our own music, and we are always striving to increase the production quality of our recordings. During ‘The End Is Mere’ sessions, we really took our time with microphone placements, recording techniques, and sound experimentation, and we enjoyed every second of it,” Jesse recalled.

“The writing and the recording was not only a culmination of the knowledge gained from past efforts, but also a learning process in microphone placement and arrangements, and writing together. We’ve always each added something personal to each song, but for this album, we all really came together and meticulously each brought something to the table,” Anthony continued.

While each of their Winkhole Records releases offers something new, this album stands out to Anthony “in so many ways.”

“After years of trial and error producing ourselves, we did a lot of research and honed these recordings. Also, the songwriting process was totally different than in the past. Usually Jesse wrote most of everything, and we would work the songs out at practice and they would eventually be recorded – some months later, some years later. For this one, with the exception of two old songs we revised, we collaborated as a band to write together more and to lay down the songs while they are newly written,” he said.

“This is our first concept album and, with the exception of ‘The Modern Life’ and ‘The March of the Megaherd,’ which were songs we’ve had for years, we decided to revise and re-record; the entire album was all written and recorded in three months. Starting in January 2018, we wrote ‘Gimme Jim-Jims’ together and went on from there to build the concept of the album – a badass anti-hero roaming an apocalyptic wasteland in space in its own self-contained universe, where some of the characters are self-aware and is initiated when the listener ‘pushes play’ and becomes the creator of this universe.”

Now that this brave new world is established, Family Animals’ mission is to invade venues far and wide with live performances, which include opening for Canadian soul funk band After Funk at Stage West (301 N. Main Ave., Scranton) this Sunday, March 3 at 8 p.m. Tickets, which are $10 in advance or $12 the day of the show, are on sale now via Eventbrite.

“We have some great gigs in the works, and hopefully we’ll be able to expand our traveling radius by the end of the year. In addition to touring, we are always working to promote this album. More music videos/singles will be released in the future as well as album reviews. We are very passionate about this band and are determined to do bigger and better things for ourselves this year,” Jesse emphasized.

“We’d like to thank everyone who helped us make this – too many people to name, but we love every single one of you – and the radios stations and YouTube channels that shared our music,” Anthony added. “We really appreciate 97.9, 92.1, and 95.3 playing our songs, and [YouTube channels] Rock Freak Deluxe and Stoned Meadow of Doom for sharing the single and album. And especially NEPA Scene!”