Throop singer/songwriter Jay Luke has been performing live since 2003, but it wasn’t until 2018 that he finally released his first solo album, aptly named “It’s About Time.”

Now, nearly a year later, he is wasting no time in releasing a follow-up, “Vandalized Memories,” soon after its completion. As a preview, the 40-year-old artist is premiering the music video for the first single, “Keep Your Head Up Kid,” exclusively on NEPA Scene.

“I literally just finished the recording of the album last evening. I know I’m as last-minute as it gets, even telling you about this now,” he told NEPA Scene with a laugh. “I’m aiming for releasing this album in about a month once all the legalities are settled up. So this single, ‘Keep Your Head Up Kid,’ is kind of buying me some time, so to speak, until the album is put out.”

Like his first video for the song “Side Effects,” he worked with Chris Balton and Mary Frances Jackson on this shoot, using a drone at Nay Aug Park in Scranton during one of the last days of autumn.

“We lucked out to have a good day to shoot it this time. As opposed to my video for ‘Side Effects,’ this time was a lot easier, as far as me not having to play characters and changing outfits and whatnot. But the challenges on this one were different. Weather was a constant enemy for shooting, and when shooting in the public, crowds are a thing that are tough to predict and avoid. So it was different from the first video, but it still had its challenges, for sure,” Luke recalled.

Over the years, he has played solo while making music with his former band The MESS, Sorrowsun, and Social Distortion tribute band Reach for the Sky, who also starting releasing their own songs, all while hosting an award-winning open mic at the Irish Wolf Pub in downtown Scranton. Rather than slowing down while writing new music this past year, he has been gigging even more on his own while performing and recording with Reach for the Sky in addition to his illustrative art on the side. After the flood of “overwhelming” positive reactions to his first album, though, he couldn’t take a break and just dived right in to his next album.

“I just wanted to get my songs out, and to see how they have touched people has been more than I could have dreamt of. I guess you never know where your music or art will end up once it’s out there. You can now put music out and have it reach across the globe in an instant, so I have been very grateful for airplay globally and to connect with fans in countries where English isn’t a first language. It’s more than I could ever have expected. Any time I get a message saying that a song is on some radio station, it just blows my mind,” Luke said.

“Everything I do or release has a lot of my personal life in it. The last album had a lot of themes and things that were very important to me to write about, like for instance my dear friend Walter Prez’s passing. But in the last year of my life, I’ve had a ton of loss and changes occur on so many levels, and I think this album has a lot of that roller coaster of emotion channeled into it. I try not to give out too much, as every person sort of takes something different from any artist’s lyrics, so to tell someone exactly what it’s about sort of ruins the mystery of things. I try to be vague, as I know what I felt when I wrote these songs. But you can’t change the way you make someone feel or what they take away from a song or album, and I feel the more you divulge, the greater chance you’ll shatter someone’s personal interpretation.”

For this record, he returned to JL Studios in Olyphant last year with some musical friends. On “Keep Your Head Up Kid,” Michael “Duds” McDonald of E57 plays lead guitar while studio owner Joe Loftus handles bass and Steve Werner adds some percussion. Jay Preston of Esta Coda plays tambourine on the album, and Lori Leader recorded a few spoken parts.

“JL Studios is one of the few places that I feel completely at home. Joe Loftus and Jay Preston are just the greatest people to work with. I cannot say enough good about them and the studio. Any ideas or songs I bring in always come out exceeding my expectations,” Luke noted.

“Like any day, week, month, or year, I just want to keep getting my music out there. Whether it’s across the ocean, across the country, or even across the street, I’ll always keep doing my thing. I love the way music connects people. Hopefully 2019 will bring on more gigs both locally and afar. In a way, I feel like I’m in a Groundhog Day cycle. Last year, I released my solo album, my music video, and our band Reach for the Sky put out an album. Eerily, that is exactly what is happening again this year. I’m not complaining whatsoever. Being a stagnant artist that relies on yesterday’s glory is a surefire way to kill off future creativity or inspiration.”

In addition to that creative itch, the support he continues to receive for his work is what keeps him motivated.

“I’d just like to thank each and everyone who has continued to support my music, whether it is people coming out to my gigs, those buying a disk, or hanging out until sunlight talking with me about bands we all relate to. Those people are the ones that are my biggest inspiration to keep on keeping on. It means so much to me to have that connection. I’d also like to mention that our area has so much talent. To be involved in the scene and not compromise to fit a style or whatnot, it means so much. I see people that play songs they hate or dread playing gigs but do them for a quick buck. I sleep better at night when I know I’m not selling out for money. If you ever see me doing something like that, stick a fork in me,” he emphasized with a laugh.

And lastly, as a do-it-yourself sort of artist, I just want to thank you personally, Rich. Without your site and you helping artists get the word out, many of us would have no promotional voice, so you’re one of the best friends to each and every artist in our area. Thank you for all that you do, and thanks again to everyone that has been following me on this musical journey. I appreciate it more than words can say – and enormous thanks to Chris Balton and Mary Frances Jackson for another incredible job on video production. Cheers!” 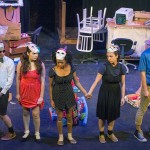