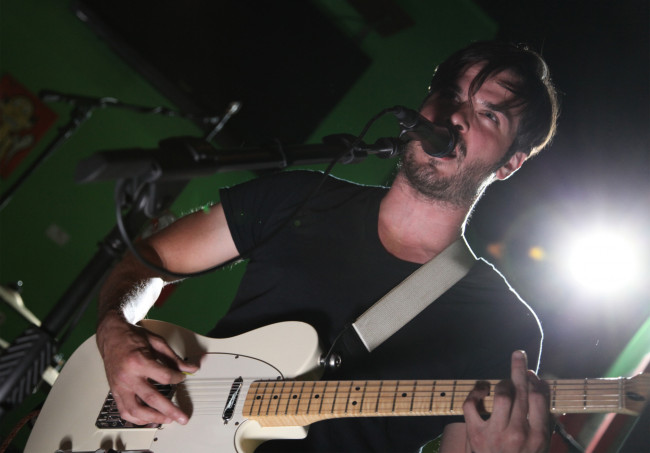 The loss of a loved one affects everyone differently, so rather than just express how he personally feels about it, Scranton singer/songwriter Ed Cuozzo has been working since last April to capture many distinct voices and the heartbreak they’ve endured. As a result, the new album from his alternative rock band University Drive is a haunting collection of songs that are shaped and held together by those disparate words.

“The whole record centers around losing my mom. I didn’t want it to just be a reflection of my own grief, being that this is a hurt that everyone has gone through, or will go through at some point in their life. I wanted it to be an accurate depiction of the confusion you go through, the ideologies you reach for when your reality falls out from under you,” Cuozzo said.

In response to his mother’s unexpected death last year, the Northeastern Pennsylvania music community created a three-day music festival in her memory at The Keys in Scranton called She’s the One: A Weekend for Doreen, a massive show that local music fans are still talking about nearly a year later. Cuozzo himself performed several times that weekend as a solo artist, in a reunion of his old band Melded, and with his current project, University Drive.

At the time, he had already begun crafting “Clear,” which acts like a communal wake much in same way that She’s the One did. The songs are interlaced with recordings by friends, family, and fans describing their own mourning experiences, molding each track in the process.

“I’d like to thank everyone who contributed their voices to this project – you have no idea how heavily you influenced the direction of this record. Without you guys, it wouldn’t have been possible. It added to the sense of confusion, and also how united people could be in their uncertainty about the big questions in life. Those voice memos took the album to another level,” he emphasized.

“And I want to thank the community for coming together for me and my family in our time of need. It’s something I’ll never forget. I’m forever indebted to you guys.”

Featuring art direction by Des Pieshefski, the full album, embedded below, is available today on Bandcamp and will be on all other streaming platforms this Friday, March 29.

It took him and his band – bassist John Husosky, drummer Steven Martin, and guitarist/vocalist Angelo Maruzzelli – about 11 months to write and record the album together at JL Studios in Olyphant, a much different process than with their 2017 debut, “On/Off: Reset,” which Cuozzo made largely on his own, playing every instrument with the exception of one track.

“There was a lot of trial and error this time around because we did the bulk of the work as an actual band. The past couple of months we’ve just been learning how to be an actual band, and not just a solo/collective sort of project,” he explained.

“We tracked a little more than half of the album live, which was such a blast. I haven’t done anything like that since the ‘Everyone’s Your Friend’ record I did with [my previous band] A Social State back in 2011. For the other half of the record, we recorded things pretty normally, standard layering/multi-tracking, but there are a couple of songs I played drums on, so it’ll be interesting to see if people can point out who did what. It was the hardest I ever worked on an album, though, no question.”

They had some additional help from his fiancé, Chelsea Collins (of Pity Party, A Fire With Friends, and Doghouse Charlie), who played piano on the song “Please Release Me,” and Shannon Walling (formerly of LondonForce) added vocal harmonies on that track.

University Drive will be surrounded by more friends and family at the “Clear” album release show, set for Saturday, May 4 at Stage West (301 N. Main Ave., Scranton) with Rosary Guild, Black Hole Heart, and Esta Coda. The concert, just announced today along with this premiere, should be as therapeutic as it will be fun.

“It’s going to be lots of fun, I think. We’re planning on playing the new record in full; we will be featuring all of the actual voice clips live too. It’s been challenging to figure out how to present these tunes live, but I’m really excited to do so. … I can’t wait to play live with University Drive again – it’s been too long,” Cuozzo said, looking forward to reactions from the public.

“I hope that, at the very least, people enjoy the songs, but on a deeper level, I hope anyone going through loss of any kind can find some sort of healing through listening to it. For me, it’s always comforting to know I’m not alone in my daily trials of life, so I hope the take away is simply that were never alone in our suffering, even when it feels like it.”

Learn more about Cuozzo and University Drive and hear him play two acoustic songs in Episode 2 of the NEPA Scene Podcast: