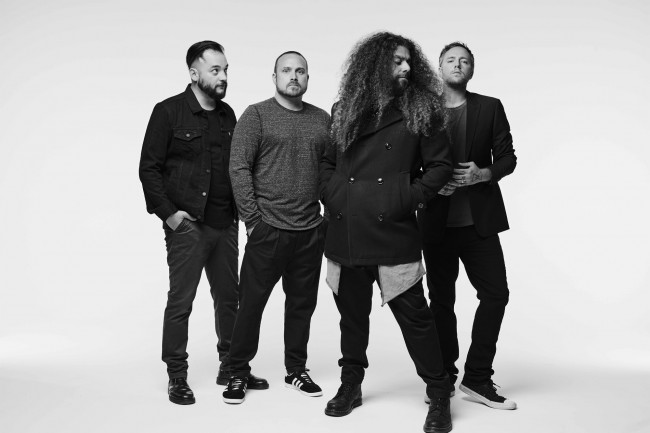 Before Coheed and Cambria embark on a North American tour in support of their latest album, “The Unheavenly Creatures,” it was revealed today that Hazleton active rock radio station 97.9X will bring the modern progressive rock band to the Gallery of Sound in Wilkes-Barre for a live acoustic show this Thursday, May 16 at noon.

The short, intimate “Secret Show” will be free, but space is limited, so fans are encouraged to arrive at the Gallery of Sound (186 Mundy St., Wilkes-Barre) early. There will also be a Q&A session and pictures with the band, but no autographs, as they are on a tight schedule.

A little over a week later, Coheed and Cambria will hit the road for the 26-city Unheavenly Skye Tour, which will see the band performing across a range of venues – from large theaters to outdoor amphitheaters – this summer. Progressive metal band Mastodon will join them as special guests, performing their renowned “Crack the Skye” album in its entirety. Epitaph Records metalcore heroes Every Time I Die will provide support on all dates.

Produced by Live Nation, the rock outing kicks off on May 28 in Louisville, Kentucky at the Iroquois Amphitheater and will make stops in Boston, Chicago, Denver, Los Angeles, and more before wrapping on July 3 The Pavilion at Toyota Music Factory in Irving, Texas. The concerts closest to Northeastern Pennsylvania on this tour will be at the Stone Pony Summer Stage in Asbury Park, New Jersey on June 4, the Ford Amphitheater at the Coney Island Boardwalk in New York on June 7, and the BB&T Pavilion in Camden, New Jersey on June 8.

Comprised of Claudio Sanchez (vocals/guitar), Travis Stever (guitar), Josh Eppard (drums), and Zach Cooper (bass), Coheed and Cambria has gripped listeners and press around the globe with their visionary compositions and conceptual mastery. This past October, they made a stunning return with their new album, “Vaxis – Act I: The Unheavenly Creatures,” which debuted at No. 1 on Billboard’s Hard Rock Albums chart, No. 6 current sales, and Top 15 on the Billboard 200 chart.

Boasting 15 songs over 78 minutes, “The Unheavenly Creatures” marked Coheed and Cambria’s furious return to concept albums, the “First Act” in a brand new story arc set within the backdrop of “The Amory Wars” universe. The acclaimed record is highlighted by standout tracks “The Gutter,” “Unheavenly Creatures,” “The Dark Sentencer” (premiered by Marvel Studios), and “Old Flames,” the latter of which features an official music video directed by Charles “Chas” Todd.

The cinematic clip features striking choreography masterminded by Broadway luminary Jon Rua, who is known for his roles in the 12-time Tony nominated “SpongeBob SquarePants” and the Tony and Grammy Award-winning hit musical “Hamilton.” Sanchez also just announced in an interview with Kerrang! that he had just inked a collaboration with Neca Toys for a line of action figures featuring characters from “The Amory Wars” universe.

Most of Coheed and Cambria’s records are concept albums based on a science fiction storyline called “The Amory Wars,” a series written by Sanchez that has been transcribed into a series of comic books as well as a full-length novel. The gold-selling band has released nine studio albums, three live albums, and several special edition releases. Their most recent release is a return to this concept following 2015’s “The Color Before the Sun,” the band’s first non-conceptual album since their inception.

The group’s music incorporates aspects of progressive rock, pop, heavy metal, and post-hardcore. Following the breakout success of their 2002 debut studio album “The Second Stage Turbine Blade,” several of their albums, like “The Color Before the Sun,” “The Afterman: Descension,” “Year of the Black Rainbow,” and “Good Apollo, I’m Burning Star IV, Volume One: From Fear Through the Eyes of Madness,” have reached the Billboard Top 10.