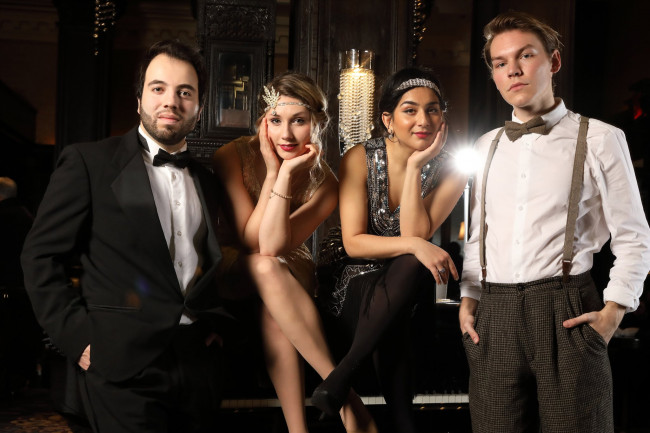 The secret is out, and downtown Scranton’s speakeasy, Madame Jenny’s, is a hit with locals looking for something new to do… or, rather, something old to do again in modern times.

This clandestine cocktail bar opened its doors last weekend with swingin’ sounds of the Madame Jenny’s House Jazz Band on Friday night. Led by respected Clarks Summit drummer Tyler Dempsey, the band features a rotating cast of characters, including many of the region’s most sought-after musicians.

On Saturday, a sexy show by Tansy Burlesque sold out the official grand opening of Madame Jenny’s. The New York City troupe took the packed audience on a luxurious and sensual journey through the best of classic burlesque as performers shed their inhibitions with Old Hollywood style and glamour.

Owned by Scranton businessman and developer Art Russo, the venue allows patrons to step back in time and visit Scranton during the Roaring Twenties, where booze flowed freely despite Prohibition and brothels flourished in what was known as the city’s Red Light District. Remotely tucked away in a hidden back room of the historic Bittenbender Building that also houses Ale Mary’s (126 Franklin Ave., Scranton), Madame Jenny’s is where the socially prominent and wealthiest citizens once indulged in all forms of forbidden fruit a century ago.

To access the “secret” location of Scranton’s premiere, upscale speakeasy today, you must enter through Ale Mary’s and find the hidden door (hint: Your secret is “safe” with us) and then pass through a top-secret passageway. Or you can wander the alley behind the building and look for the red light to be lit above an unidentified door.

When you finally arrive inside the dazzling nightclub, prepare to immerse yourself in the nostalgia and authenticity of a bygone era. From the room’s plush art deco couches to its glittering chandeliers, Madame Jenny’s luxurious furnishings hail directly from New York City’s famed Waldorf Astoria Hotel. To boot, the stylish space’s ambiance would render even Gatsby envious. Open Wednesdays through Saturdays from 5 p.m.-midnight(ish), it’s the “bee’s knees,” as they used to say.

This week, Madame Jenny’s hopes to keep the buzz going by starting some new traditions. On Thursday, May 2 from 6 p.m.-9 p.m., there will be a piano bar sing-a-long with Paul O, a.k.a. Mr. Keys. This rowdy and raucous night of crowd crooning will be held every Thursday by Mr. Keys with no cover. The description reads: “We provide the lyrics, you provide the fun. Feeling especially daring? The bold and the brave can jump on stage and serenade to their hearts’ content. Warning: ‘Stairway to Heaven’ is banned for all eternity.”

Spencer Reed will join the Madame Jenny’s Jazz Band for a performance on Friday, May 3 from 6:30 p.m.-10:30 p.m. with no cover. After touring with the USO throughout the Caribbean and Panama and freelancing in New York City, Reed settled in Pennsylvania’s Pocono Mountains, where he performs with his wife, singer and bassist Nancy Reed. He’s a regular at the Deer Head Inn in the Delaware Water Gap, a famed jazz landmark, and has accompanied multiple traveling acts that pass through the Poconos, including Billy Ekstine, the Fifth Dimension, Robert Goulet, Sergio Franchi, Frankie Laine, Julius LaRosa, Eddie Fisher, and Bobby Rydell. Reed has aldo hit the road with the Bob Crosby Bobcats and appeared at the Bix Beiderbecke Memorial Jazz Festival in Iowa, the Sacramento Jazz Jubilee in California, the Red Nichols Jazz Festival in Utah, the San Juan Islands Jazz Festival in Washington, and more.

On Saturday, May 4 from 8 p.m.-11 p.m., Doug Hawk will play with Madame Jenny’s House Band; there is no cover. The Easton-based vocalist/pianist describes his sound as a mix of funk, soul and R&B with a jazz influence. Hawk, a 1998 graduate of Moravian College, has been involved with music for 20 years, singing in various bands along the way and serving as both songwriter and lyricist. He recorded a live album, “Eleven Alive,” at Black & Blue in Easton in 2011 and released the record on Jan. 16, 2012.

Seen locally at events like the Scranton Jazz Festival, Dempsey’s performances have been broadcast through TV and radio stations such as WVIA. He served as the house drummer at the historic Deer Head Inn’s jazz jam sessions and Ruth’s Chris Steakhouse at Mohegan Sun Pocono, and his Electric Trio was awarded Jazz/Classical/Big Band Act of the Year at the 2018 Steamtown Music Awards. He is currently director of percussion instruction at Keystone College in La Plume. Dempsey also appeared on the song “Skies Above” on Wilkes-Barre singer, songwriter, and guitarist Aaron Fink’s 2017 solo album, “Galaxies.”

Coming up at the end of the month, Vocally Aligned will mark their world debut at Madame Jenny’s on Friday, May 31 from 8 p.m.-11 p.m. Featuring songs like “Just a Gigolo” and “Ain’t We Got Fun,” the New York City quartet will allow listeners to discover why these timeless songs from Prohibition and the Great Depression are forever part of the Great American Songbook. These reinterpreted classics will be delivered in a totally different way, with voices reaching stunning new heights. Tickets, which are on sale now at madamejennys.com, are $25 for general admission, $50 for second through fourth row seats, and $60 for front row VIP cabaret tables (maximum of four to a table).

After the 18th Amendment took effect on midnight, Jan. 17, 1920, more than 150 speakeasies sprung up around town “to slake the thirst of those inclined to imbibe in the cup that cheers,” according to published newspaper accounts. In addition, more than 100 “bawdyhouses,” a.k.a. brothels, thrived in the alleyways behind the Bittenbender Building, just along Raymond Court and Center Street.

While those days are long gone, patrons can now once again settle into Madame Jenny’s lavish splendor, sip classic cocktails, nosh on gourmet vittles, and jump, jive, and wail to weekly music and entertainment that embodies the spirit of the brick building’s fascinating and provocative history.