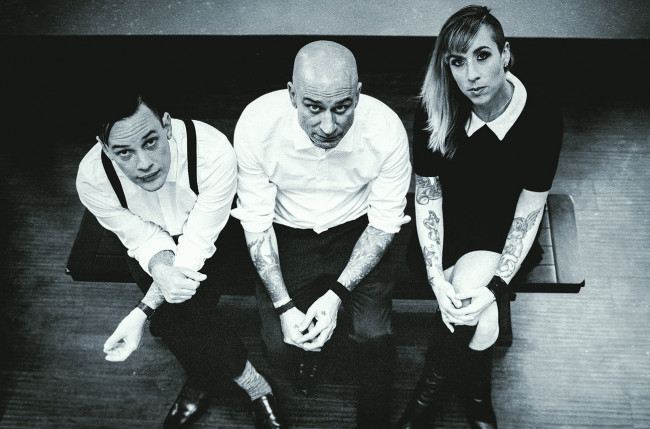 In early 2017, NEPA Scene broke the news that Berwick native Nick Coyle, a singer/songwriter who fronted various local bands over the years like Lifer, The Drama Club, Stardog Champion, and Death Valley Dreams, had joined alternative rock band Cold as their new guitarist. Now, the gold-selling national act has released the first single from their first studio album in eight years, “Shine,” which is also the first Cold song to feature Coyle.

Debuting on Billboard.com yesterday with a photo featuring Coyle in the new lineup, the lyric video for “Shine” emphasizes its anti-bullying message with facts and statistics about bullying on its devastating effects.

“It’s about dealing with physical abuse at home and becoming triumphant over bullying,” vocalist Scooter Ward said about the song in a press release.

“I faced bullying throughout my early formative years. I’m hoping it helps someone feel not so alone if they’re going through it right now.”

The band also announced that their sixth studio album and Napalm Records debut, “The Things We Can’t Stop,” will be released on Friday, Sept. 13 and can be pre-ordered now.

The origins of Cold go back to 1986, but their self-titled debut album didn’t come out until 1998. From there, as the press release states, “At the turn of the century, the band unveiled the seminal ’13 Ways to Bleed on Stage,’ which went gold and yielded hits such as ‘Just Got Wicked,’ ‘No One,’ and ‘End of the World.’ The 2003 follow-up, ‘Year of the Spider,’ marked their highest chart position, bowing at No. 3 on the Billboard Top 200, receiving a gold certification, and spawning the smash ‘Stupid Girl’ accompanied by Rivers Cuomo of Weezer. 2005’s ‘A Different Kind of Pain’ illuminated melodic strides to the tune of 37,000+ copies sold first-week and a Top 30 debut. Meanwhile, 2011’s ‘Superfiction’ continued this streak, crashing the Top 10 of the Top Rock Albums Chart upon arrival and extending a growing legacy.”

After a two-year break from Cold, Ward – the only founding member left in the band – decided to start working on the group’s first new studio record since “Superfiction” in 2017.

“I needed life to happen to be able to create,” he recalled. “There were probably around 15 years where all I did was live and breathe the band. I needed to separate from that to remember what it was like to not have it anymore. It was extremely important for me to spend time with my family. I did experience writer’s block for the first time in my life during the process, though. It was brutal because the one thing I’ve always had left me. It seemed the series of events in my life had taken away my soul. It turned around. I’ve remained adamant about evolving a bit with each record. Approaching every chapter as a new beginning is paramount and necessary for it to be a true Cold album.”

That’s when he and Coyle started talking about collaborating, and Coyle brought in another Northeastern Pennsylvania native, Jon Nova from Death Valley Dreams, to help work on the album.

“I’ve been friends with Scooter and rest of the guys for like 15 years now, since back in the Lifer days. We toured with them in Lifer and then again when I was in The Drama Club. A few months ago, Scooter hit me up and said he was doing a new Cold record and asked if I wanted to be a part of it… and I said yes,” Coyle told NEPA Scene in a 2017 interview.

Coyle is probably best known as the singer of Lifer. Originally known as Strangers with Candy when they formed in 1999, the Wilkes-Barre group quickly made a name for themselves in NEPA with their popular “No Need” EP, and once they entered MTV’s “Ultimate Cover Band Contest” in 2000 and won, they became famous across the country virtually overnight.

With two members leaving to join Breaking Benjamin, a new lineup independently recorded an EP before changing their name to myDownfall and breaking up in 2003, though Coyle and other core members reunited for an official Lifer comeback in 2018.

Ward and Coyle co-produced the new Cold album’s 12 tracks, recording “in multiple locations,” the press release continues. “Drums and bass would be cut in Phoenix with Jeremy Parker at Equinox Studios joined by Nick Coyle (guitar, keys, backing vocals), Lindsay Manfredi (bass), and Aaron Fulton (drums). The rest of the material came to life at Ward’s home studio in California and in the woods of Pennsylvania at Nick’s.”

“[Coyle] played in a bunch of bands and has been trying his whole life to be successful, so it’s nice he’s able to come with us now and is a great addition to the band,” Ward told Billboard.

“Lindsay [Manfredi] is the same way. She’s been touring her whole life in bands and trying to get it done and is a beautiful person and a great bass player. It’s all working real well. Everybody’s happy to be out here.”

In the press release, he added, “When you listen to this [album], if you’re going through something tragic, maybe you can take a small bit of hope that you’re not alone. To me, Cold means family. The fans who have stayed with us throughout the years and the people who have worked with us and are all connected through the music. The shows are reunions. These people have become my life. I’m extremely thankful.”

With North American tour dates set to be announced soon, expect to see Coyle out on the road with Ward and the rest of the new lineup. Presumably, this means Lifer will be on hold for a bit while this new Cold album cycle begins, but after debuting their first new song in 18 years just a few months ago, there may also be new life in Lifer yet, and Death Valley Dreams is still producing new music here and there.

See NEPA Scene’s review and photos of the first 2018 Lifer reunion show here and watch Episode 76 of the NEPA Scene Podcast below, where Coyle and guitarist Aaron Fink discuss Lifer’s formation, the burgeoning local music scene at the time, their big break on MTV, meeting and performing with Cold, Lifer’s breakup and later reformation as Stardog Champion, revisiting old music all these years later, their reunion concerts, and more: