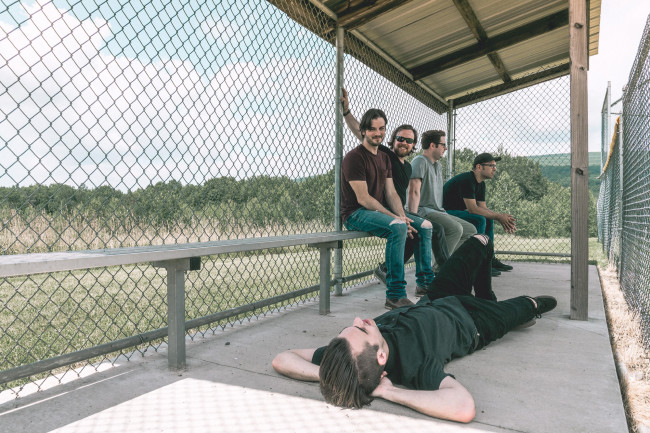 While they’ve received a lot of positive feedback and reviews recently from their new album, “Clear,” Scranton alternative rock band University Drive never expected to impress a national act so much that they would be invited to tour with them.

Last month, gold-selling alternative rock band Cold released the first single from their first studio album in eight years, “Shine,” which is also the first Cold song to feature Berwick native Nick Coyle on guitar. The singer/songwriter who fronted local bands like Lifer, The Drama Club, Stardog Champion, and Death Valley Dreams over the years joined Cold in 2017 and ended up playing a significant role in the recording and production of their sixth studio album, “The Things We Can’t Stop,” due out Sept. 13 on Napalm Records.

Coyle messaged University Drive singer/guitarist Ed Cuozzo to ask if he’d be interested in touring with them and, soon after, Cuozzo was talking to Cold vocalist Scooter Ward himself.

“It’s all crazy. I received a message directly from Scooter talking about ‘Clear’ and how he dug our sound and wanted us to come out on the road with them. We exchanged numbers, started talking a lot, and he basically said we could do as much of the tour as we wanted… which was/is mind-blowing,” Cuozzo told NEPA Scene, breaking the news to the public.

“All of us kind of freaked out a bit. We’re still freaking out.”

Today, Cold announced the Broken Human Tour, which runs across the country with Italian metal band Awake for Days from the end of August through October. University Drive plans to play 16 or 17 of those dates, including a stop at Levels Bar & Grill (519 Linden St., Scranton) on Sunday, Sept. 1 with fellow Scranton band Behind the Grey.

Cuozzo still has “no idea” why his small, unsigned band was chosen out of so many.

“In all seriousness, I think maybe [Scooter] felt a connection to the music, and maybe to the overall subject matter of the record. Maybe he could sense the reality that lives in those songs, you know?” he said of “Clear,” which was inspired by the sudden loss of his mother.

“I’ve talked with Scooter a ton since our first initial contact. We mostly talk about music/art in general, just the intention behind it. We’ve talked a ton about the tour, and then there’s times where we’ll just talk about our dogs. He’s a real stand-up guy, very genuine human being. He’s also had some very kind words to say about ‘Clear,’ and I’m very grateful to him for that. I’ve also spoken with Nick and [Cold bassist] Lindsay [Manfredi], who have been nothing but nice and complimentary as well. They’re all just wonderful people.”

This has made him an even bigger fan of Cold than he already was, a band known for 2000’s “’13 Ways to Bleed on Stage,’ which went gold and yielded hits such as ‘Just Got Wicked,’ ‘No One,’ and ‘End of the World.’ The 2003 follow-up, ‘Year of the Spider,’ marked their highest chart position, bowing at No. 3 on the Billboard Top 200, receiving a gold certification, and spawning the smash ‘Stupid Girl’ accompanied by Rivers Cuomo of Weezer. 2005’s ‘A Different Kind of Pain’ illuminated melodic strides to the tune of 37,000+ copies sold first-week and a Top 30 debut. Meanwhile, 2011’s ‘Superfiction’ continued this streak, crashing the Top 10 of the Top Rock Albums Chart upon arrival and extending a growing legacy,” a press release stated.

“Growing up, I was always a fan of ‘Year of the Spider.’ That was the record I was really stoked on; I still love that album. But after getting asked to go on tour, I started going down the Cold rabbit hole. I love and connect personally with a lot of songs off of ‘Superfiction.’ Something about the vocal melodies on that record are so sweeping and vibey and cool. I always felt like they were the one band from that era/genre that had so much more substance and authenticity to what they were doing than a lot of the other bands of that time. They seem to have something for everyone socially, from rock fans to metal fans to indie rock fans to progressive fans,” Cuozzo explained, noting that his band doesn’t sound similar but may “have similar intentions musically.”

“It’s all about conjuring up some sort of emotion in the listener for Cold and their fans, a very emotional-based music. I think we definitely come at it from that same place. On the musical side of things, I know Scooter and I are both big fans of Weezer’s ‘Blue Album,’ so I think you can hear certain beats/melodies that are inspired by a lot of that record here and there.”

What University Drive doesn’t have in common with Cold is a budget big enough to pursue music full-time, so they’ll have to take time off from their day jobs to embark on their first-ever tour. While Cuozzo has hit the road with UD and his previous bands A Social State and A Fire With Friends, these were short DIY trips playing in basements and small bars, not a full-scale club tour playing for thousands of people. That’s why they’re turning to local fans for help raise $2,500 through crowdfunding website GoFundMe.

“This will cover most of our gas and merch costs if we are able to hit this goal. We don’t have any perks listed, but we definitely plan on giving back to all who donate once we get back from the tour, whether it be in the form of a single, a specialized short run of merch, or vinyl,” he emphasized, adding that they still plan to tour no matter how much they raise.

“We won’t be working on the runs that we’re out for, so our main income source is gone. We will most likely be sleeping in our vehicle for the majority of the time we’re on the road too, or driving through the night, outside of getting a hotel/motel when possible. We’ll be away from our loved ones too, which isn’t easy for any duration of time. It’s definitely difficult, but it’s also incredibly rewarding.”

This also means that two members, bassist John Husosky and live guitarist Scott Jordan, won’t be able to play most of these shows, so Ryan Grutt of Alma Mater will be filling in with drummer Steven Martin and guitarist/vocalist Angelo Maruzzelli, performing as the four-piece pictured above.

“He’s a great dude and a super talented and driven guy. We’re so lucky to have him on board with us,” Cuozzo said about Grutt as they continue rehearsing songs from “Clear,” University Drive’s 2017 debut “On/Off: Reset,” and a cover song, “which we never do.”

Premiering on NEPA Scene in March and performed live in its entirety at Stage West in May, “Clear” resonated with so many local listeners that it could easily find a national audience this fall.

“The most gratifying part has been hearing stories from certain people who’ve heard the record and then express how it has been helping them get through their own losses, heartbreak, and rough patches in life. I couldn’t ask for more than that. It’s been incredibly moving and humbling to not only me, but the entire band,” Cuozzo left off.

“I’m looking forward to playing to new crowds every night and having the opportunity to share our music with as many new faces as possible. Outside of that, I’m just excited and honored to get to have this experience. Who knows when/if it will happen again, so we have to take advantage of this opportunity now. I’m so very grateful to Scooter and the rest of Cold for giving us this ridiculous opportunity – forever indebted to their kindness and willingness to take a chance on our little silly band from Scranton.”

Learn more about University Drive and the creation of “Clear” from Cuozzo and drummer Steven Martin and hear two acoustic songs in Episode 105 of the NEPA Scene Podcast: