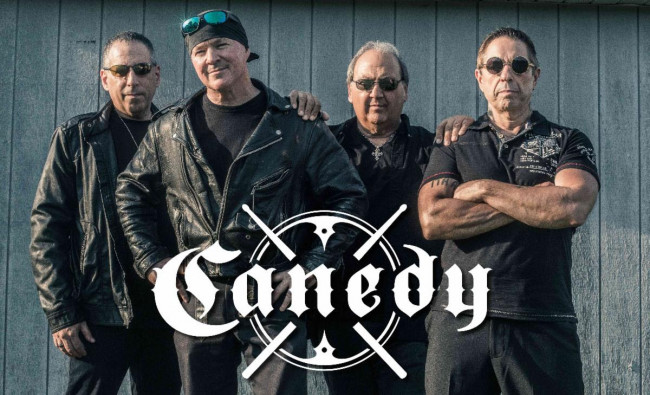 2019 continues to be a busy year for Carbondale musician and producer Carl Canedy, best known as the drummer of The Rods since they formed in 1980.

The legendary heavy metal band released their first full-length album of new original material in eight years, “Brotherhood of Metal,” on June 7, and soon after, it was announced that Canedy would receive the Lifetime Achievement Award at the Steamtown Music Awards in Scranton on Thursday, Sept. 12.

Now, he is ready for the live debut of his solo project, Canedy. He released his first solo album, “Headbanger,” in 2014 with a handful of guest artists, but five years later, he has put together a full band for a debut performance at Blues on the Bridge in Binghamton, New York on Sunday, Sept. 8. The band lineup features regional musicians Mike Santarsiero (vocals), Charles Russello (guitars), and Tony Garuba (bass).

The band has also recorded a new album mixed by Chris Collier (Tool, Whitesnake, Last in Line), due for release in early 2020.

“After releasing my first Canedy album, ‘Headbanger,’ I realized that my next effort needed to be a band project. Fortunately for me, Mike, Tony, and Charlie, three amazing musicians who live nearby, were willing to work with me on a new album. I’m now part of a kick-ass project called Canedy,” Canedy said in a press release.

“We are all really proud of this album, and we’re excited for people to hear what we’ve done! Come see us at our first-ever gig, where we will be headlining Blues on the River in Binghamton.”

He uploaded a three-song sampler to his YouTube channel that fans of The Rods are sure to enjoy:

The Rods, formed in Cortland, New York, were signed to Arista Records and released classic ’80s albums like “The Rods,” “Wild Dogs,” “In the Raw,” and “Let Them Eat Metal” while touring with the likes of Metallica, Judas Priest, Iron Maiden, Ozzy Osbourne, and Motorhead. They have only played select shows in recent years, including a 2016 concert at Thirst T’s in Olyphant as part of the Electric City Music Conference, but Canedy is still an active drummer in Northeastern Pennsylvania for groups like the Jeffrey James Band.

A real estate agent by day, Canedy is also known for producing over 30 albums, including classics by Anthrax (“Armed and Dangerous” and “Spreading the Disease”), Overkill (“Feel the Fire”), Exciter (“Violence & Force”), Possessed (“Beyond the Gates”), and Attila (“Rolling Thunder”).

He will be given the Lifetime Achievement Award at the sixth annual Steamtown Music Awards at The V-Spot (906 Providence Rd., Scranton) on Sept. 12, which serves as the kickoff to the 2019 Electric City Music Conference. The rest of the conference takes place on Friday, Sept. 13 and Saturday, Sept. 14 with over 150 bands across 11 Scranton venues, along with an educational component with industry professionals.

“Carl’s name has come up every year that we’ve presented the Lifetime Achievement Award, and he’s always been beyond deserving. Not only did The Rods achieve outstanding success in the ’80s – they still have a cult following today,” ECMC co-organizer Joe Caviston said last month.

“Not to mention his producing career. Your favorite metal and thrash bands have undoubtedly been influenced by him, whether you know it or not. I feel like every time I log into Facebook, I see a post about Carl jetting off for Europe to play in front of tens of thousands of people at an open air festival.”

“What can one say about Carl Canedy’s lifetime achievements? Besides being one of the finest drummers in the USA, he had the golden ears that propel our record company Megaforce to the stars with his super talented skills as a record producer,” Megaforce Records owner Jon Zazula (Jonny Z) added.

“I also must mention Carl is a real nice guy.”