It was announced today that Australian indie pop band The Griswolds will perform at the next Alt 92.1 Private Artist Showcase on Friday, Nov. 8 at 4 p.m.

Held in the local alternative radio station’s Alt Radio Theater in the Scranton Times building (149 Penn Ave., Scranton), this intimate all-ages show is free, but seating is limited and tickets are issued on a first-come, first-served basis. To get a ticket, text “nice” to the Alt 92.1 Text Club at 88474. Fans are encouraged to arrive early to guarantee a seat, as the room is purposely overbooked to ensure a full theater.

On Aug. 30, The Griswolds released their new single, “Nice to Meet Ya,” from their forthcoming album.

“The band is ready to roll out the third album, and the music is at a whole new level,” lead singer Christopher Whitehall said.

“I had to take some time off to kind of rediscover my love of music and songwriting. It’s easy to get disillusioned in a band and fall under the pressure of trying to write ‘hits’ and stay relevant. I say fuck all that; I just wanted to get back to a point where I was making songs that I loved, lyrics I could scream at the top of my lungs, and music that was fucking fun to make. I feel like the band has found a way to tap into the early days when we were creating music in our bedrooms, and I’m just madly in love with doing this again.”

From the opening track of The Griswolds’ breakthrough second album “High Times for Low Lives,” there are bad decisions, dubious choices and – right there in “Role Models” – electro-funk keyboard stabs that punch through the heart of a beat-laden R&B jam. There are drugs, models, and sparkling, innovative pop. And if you thought you knew The Griswolds, think again.

“High Times for Low Lives” is the four-piece’s explosive coming out party, an amalgam of electro R&B rock intersecting with the slinky indie they’re known best for from 2014’s “Be Impressive.” Thematically following the process of a relationship decline, the ups and downs of following dreams, and how these moments showcase life at its fullest, “High Times for Low Lives” is an immersive thematic experience, as well as a sonic evolution for The Griswolds.

The result is an album that’s playful, ominous, twisted, exuberant, turbulent, and impossible to categorize. Simply, it’s a thoroughly modern record that defies convention, taking listeners on an exhilarating genre-shifting ride amid an outpouring of self-recrimination and reflection.

That cycle of emotional turmoil came after the roaring success of debut album “Be Impressive” (whose plaudits include reaching No. 2 on the Billboard New Alternative charts, No. 7 on the Heatseekers charts, and No. 5 on the iTunes Alternative charts while selling over 25,000 copies, scoring over 30 million U.S. album streams, and seeing the band tour extensively and play massive festivals the world over) and the nomadic, ripe-for-debauchery life that came with constantly being on the road, proving that, sometimes, the sacrifices you make to follow your dreams have unintended consequences.

But in writing the album, the band took a bracingly isolated approach. They returned to Australia in August of 2015 and locked themselves away in the remote wilderness two hours north of Sydney, in a house with no Internet nor cell service, effectively cutting them off from civilization and leaving them alone with their thoughts in beautiful surroundings.

“The house was in the middle of nowhere, surrounded by forest and backed on to a mountain,” Whitehall recalled. “Every day I’d wake up, climb that mountain, and just be alone with my thoughts; then go for a swim and work on songs. It’s really weird but refreshing to be cut off from the rest of society that way; all we did was write, create, hang out, and listen to records like Kendrick’s ‘To Pimp a Butterfly’ and ‘Currents’ by Tame Impala.”

As the writing progressed across three stints in late 2015, the immersive sonic layers and diversity of “High Times for Low Lives” reflected the band members getting out of their comfort zone and simply deciding that, when it came to album number two, there would be no regrets.

“We could’ve made ‘Be Impressive’ 2.0,” Whitehall asserted, “but there’s no challenge in that. From the moment we wrote the first song for the album, ‘Birthday,’ we had a vision for what this band could sound like – and that was anything we wanted it to, no matter how out there.”

As Duque-Perez explained, the band spent a lot of time “digging back in time and revisiting the greats and trying to block out current trends unless they were undeniably creative or groundbreaking. George Clinton, James Brown, Dr. Dre, Michael Jackson, Prince, Al Green, a lot of soul and Motown, but also contemporaries like Kanye West, Kendrick Lamar, The Weeknd, Tame Impala. The fun was in learning about music we’ve never done before that everyone we knew at the time was saying we couldn’t do because of who we are or because of where we are from. I don’t feel like music should have those kinds of barriers and cages; music should remain artistic and speak to what’s in the artist’s heart, soul, and mind.”

Led off by the punchy, rambunctious indie pop of lead single “Out of My Head,” “You Don’t Love Me” and “Looking for Love” fuse 2016 electronic flavors and the smooth R&B funk of Michael Jackson together in memorable fashion. “Feels So Right” is a smooth dance floor killer, while the emotive fingerprints of artists like The Weeknd are all over “Hate That I Don’t Hate You.” And the off-kilter tropical afro-beat funk of “Get into My Heart” will leave you singing along and wanting more. Everywhere you turn, there’s another layer to get lost in.

“Sonically,” Duque-Perez noted, “I wanted to take us to a new world, to be hard to properly classify or pigeonhole. I was full of confidence and self-belief that it was possible to make a new path, our own path, our own sound, I felt like we had no limits – shoot for the stars and, even if you miss, you still might land on a cloud. Set the rule book on fire and treat music with confidence again.”

And working with Andrew Dawson – a longtime Kanye compadre who Whitehall calls “a genius” – was “a dream come true,” Duque-Perez said. “He’s made records for our idols, and to sit in a room with him and create was an absolute privilege. It’s like writing a script and Christopher Nolan decides he wants to direct your film.”

Then there’s the fact that the album, released on Nov. 11, 2016 via Wind-Up Records, is thematically built around an intensely personal narrative for Whitehall – it’s just one more striking and absorbing aspect to the album. As a result, “High Times for Low Lives” is more than aptly titled, with the album cycling through the demise of relationships – bad behavior, heartbreak, falling in love again, and more heartbreak. It’s at times funny, heartbreaking and, above all, jaw-droppingly honest.

“Every song is a puzzle piece that paints a bigger picture,” Whitehall said. “It’s a collection of stories and confessions about us, our lives over the last two years. It’s about the high times, literally living the dream that we always wanted to live, this crazy ‘rock star’ fantasy that we dreamed of since we were children.”

“The perception of that life,” he continued, “is that everything is always perfect and amazing, but it can honestly be really wearying sometimes on the road. The feeling of loneliness and emptiness often lead to some poor decisions; you get sucked into drinking and drugs and empty relationships. The result of that is the toll that that has taken on our relationships with loved ones, family, friends, and girlfriends.”

“Like, a lot of this doesn’t really cast me in a great light,” he admitted with a laugh. “In fact, a lot of it is the opposite. It’s detailing the sacrifice you sometimes have to make to your relationships when you’re trying to do what you love.”

In the end, “High Times for Low Lives” is a record that’s built on The Griswolds challenging
themselves to evolve their sonic palette while dealing with tattered lives in shredded emotional states. It stands as a unique statement on the cutting edge of pop music in 2016. 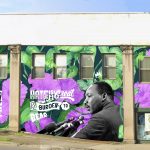