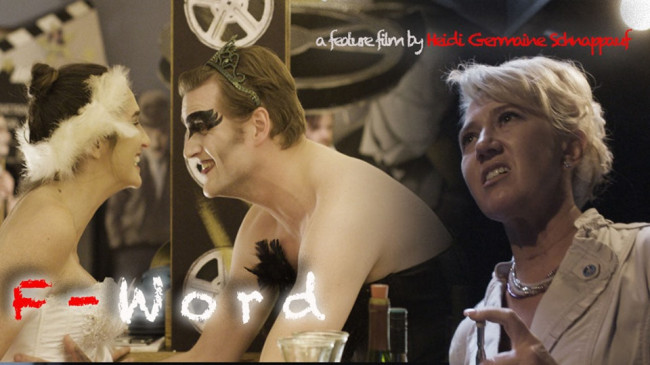 Long after the director yells “Cut!” on any film, there’s still plenty of post-production work to do, and that work requires funding. To finish a movie written, filmed, and set in Northeastern Pennsylvania, a local filmmaker is asking for tax-deductible donations via Kickstarter to make her vision a reality before time runs out.

Last fall, professional actor and stuntwoman Heidi Germaine Schnappauf, a Kingston native, was inspired to step behind the camera to take the next step in her creative career – directing a feature film.

She and co-writer Mike Wawzynek sat down at their keyboards to pen the script for a short film. The duo soon discovered the story couldn’t be contained in a short, so the script blossomed into a feature-length screenplay titled “F-Word.”

“F-Word” focuses on Mike Gallagher, an average, all-American guy. Engaged to the love of his life and teaching middle school English, his life is as happy as can be until a Sunday matinee performance at his local theater turns his world upside-down. When a picture of Mike gets plastered all over the school, he quickly finds out that not all of the parents at Woodward West Middle School appreciate his talent for dressing up in women’s clothes. Now, with his job on the line, Mike learns his fiancé is going to have a baby and, of all of the F-words he’s been called, “father” is the one that scares him most.

“F-Word” is a story about love, acceptance, understanding, and support, and Schnappauf found an amazing level of community support when it was time to start shooting. The entire cast and crew – from lead actors to makeup artists and electricians – volunteered their time to bring “F-Word” to life, completing principal photography in just six weekend days while their director worked her full-time stuntwoman gig on the NBC television series “Blindspot” during the week.

“The overwhelming support from not only my friends, but the entire community has been so unexpected, but enormously and graciously accepted and appreciated. Childhood friends donated their houses and spaces for meeting, location shooting, and screening. My favorite local restaurants got involved with offering their services at generous discounts,” Schnappauf said.

“Something Special Bakery and Canteen Park, both in Kingston, offered amazingly delicious and healthy options for our breakfast and lunch every day, and Goldstein’s Deli provided a little more on days with over 100 people called to set. Local businesses such as Jeff D’Angelo’s Design Group donated all of the amazing movie props for one of the biggest scenes in the film – and the Wyoming Valley West School District helped us out with a location to film all of the school scenes. The Kingston police even helped us to be safe while shooting on a makeshift process trailer on the streets of Kingston one rainy Sunday morning. To say that this community really pulled together to help make this movie even possible is an understatement.”

Now Schnappauf is working to secure funds to complete post-production work on her indie film. By contributing to “F-Word’s” Kickstarter campaign, backers can receive rewards like a movie poster signed by the director and cast, tickets to the film’s Wilkes-Barre premiere, a producer credit, and more.

This project will only be funded if it reaches its goal by next Friday, Nov. 1 at 11:59 p.m. As of now, $11,885 has been pledged towards the $18,000 goal. A nonprofit organization called The Chimaera Project is a fiscal sponsor for the film, so all supporters of the crowdfunding campaign can receive a receipt for these tax-deductible donations.

Over the years, Schnappauf has been set on fire, blown up, waterboarded, drowned, strangled, beaten, and hit by cars, all for the sake of entertainment. From playing Anne Frank on the stage of the Little Theatre of Wilkes-Barre to crashing fire trucks and fighting bad guys, she now makes her living as a professional stuntwoman, stunt coordinator, actress, and director.

She graduated with honors from NYU’s Tisch School of the Arts before earning a list of film credits that include “Paranormal Activity 2,” “The Amazing Spider-Man 2,” “Ghostbusters,” “Birdman,” and “Teenage Mutant Ninja Turtles,” just to name a few. On the small screen, she’s performed in shows like “Jessica Jones” (starring Shickshinny native Krysten Ritter), “Orange Is the New Black,” “Gotham,” “Great News,” “The Following,” and “Blue Bloods.” She is currently part of the three-time Emmy-nominated stunt team on “Blindspot,” serving as the stunt double for actress Jaimie Alexander.