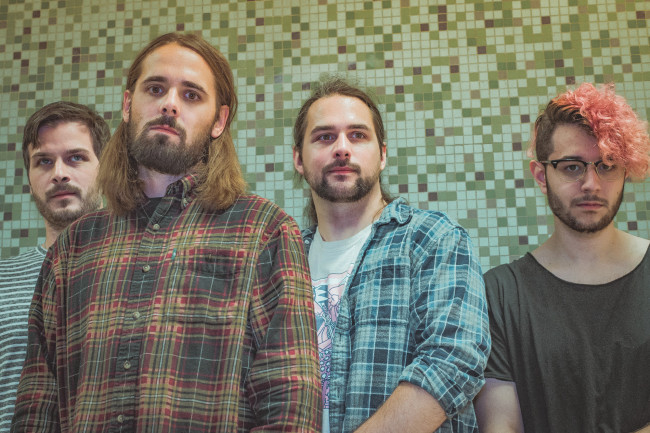 Alternative… punk… hard rock… whatever you want to call Black Hole Heart, you can’t say that this Scranton band is stuck in their ways.

From their 2016 debut through their upcoming EP, vocalist/guitarist Kyle Lukasewicz and lead guitarist Steve Zampano have consistently let the music rather than genre conventions guide their songs. This will be even more apparent on “a•sym•met•ri•cal,” due out this Thursday, Oct. 31.

“I chose the name ‘a•sym•met•ri•cal’ because I felt that these songs were all different from each other, yet they still all sounded like Black Hole Heart songs. They kind of show our progression as a band from our 2016 demo up until today,” Lukasewicz told NEPA Scene.

“This time last year, we started working on a single called ‘No Refills’ with JL Studios [in Olyphant]. A lot of our friends had cut records there and we really liked how the first University Drive record came out, so [UD vocalist] Ed Cuozzo hooked us up with [studio owner] Joe Loftus and our friend Jay Preston from Esta Coda. We had so much fun doing that song. It was such a good working environment that we decided we wanted to make a record with them. So, in January, I started writing the songs that would become our new EP. After a few months of workshopping the songs and playing shows, we put everything on hold and hit the studio.”

Today, NEPA Scene is premiering one of the five resulting tracks, “Fever Dream,” a single that ended up being the most “radio-friendly” song on the EP.

“When I wrote ‘Fever Dream,’ I wanted it to be a fun song about the confusing, nonsensical things someone might dream about that are brought on by a fever. It’s as straightforward as it sounds,” Lukasewicz explained.

“Honestly, it wasn’t until after the song was written that I realized it was one of our more mainstream songs. It was a fun song to play with the band, and it came together pretty organically. It was catchy and simple, and that is what might make it more ‘mainstream’ than some of our other songs. We don’t have an agenda with our songs, and they all come out different. For example, our song ‘Dead Leaves’ from the record is over seven minutes long, which is about as anti-radio-friendly as it gets.”

For this collection, Lukasewicz wrote the songs and brought them to the band to be fleshed out, with the recording starting in June and finishing up just this month.

“It wasn’t like we went in for a week straight and banged everything out all at once. With everybody’s schedules, this was the way we made it work. Making a record is a lot of hard work, and it can be very time consuming and frustrating at times. Sometimes you can forget to have fun in the process, but at JL, we never stopped having fun. It was a very laidback environment where they encouraged experimentation. We never heard the word ‘no.’ We will definitely be going back to record with those guys again in the future,” he recalled.

“I recorded all the rhythm guitars, and Steve and I worked on the leads together. The drum tracks were done by Ed Cuozzo of University Drive and Randy Weller, who was in Permanence at the time. Both of them had been our live drummers in the past. Our bassist at the time, James Jaskolka, did all his tracks. It wasn’t until after the recording process that we added our new bassist, Chris Benitez, who also plays with The Boastfuls. Everybody’s contributions are what made this record what it is today. I’m very grateful for everyone’s hard work.”

With recording and member shuffling out of the way, Black Hole Heart can get back to being what they’re meant to be – a compelling and dynamic live act.

“It’s hard for me to describe our sound because it’s whatever we want it to be. I’d like to think that we are constantly evolving and making music that we love to play. That’s what’s most important to us. We are a live band first and foremost, and these songs had to be fun for us to play on stage. We love rock and roll and loud guitars,” Lukasewicz emphasized.

“I think every band goes through growing pains. We have had members come and go throughout the years. We’ve probably gone through more drummers than Spinal Tap, but now we’ve got a great group of guys who love playing music together. Steve and I have always been the primary songwriters, so I think a lot of our sound is based around what we do together.”

Rather than talk about musical influences, he would much rather highlight “other local bands and artists that make this scene so amazing,” such as University Drive, Permanence, Esta Coda, James Barrett, Rosary Guild, Alma Mater, Idolizer, Cheap Seats, Shared Light, American Buffalo Ghost, Sweetnest, A Fire with Friends, Joe Lombardo, The Boastfuls, Nate Williams, Old Charades, and Eye on Attraction.

In addition to sharing stages with many of those names, Zampano has spent the last few years on the other side of Northeastern Pennsylvania venues running sound for them.

“Steve has really carved out a path for himself in the last few years and become one of the top live sound engineers in the area. He has been responsible for running live sound at countless venues for countless bands. It’s his passion in life,” Lukasewicz noted.

“His company Paradise Audio Logistics is available for all your live sound needs. You can contact him at steve@paradise-audio.com with any inquiries.”

Black Hole Heart is still planning a record release show and tour dates at the moment, but the 29-year-old singer feels that the recordings achieve their goal to “always make loud, high-energy guitar-based rock and roll.”

“I hope people can see how much fun we had with these songs,” he added. “There are a lot of dark themes throughout the record, but I think they are relatable to a lot of people. Not everything in life is sunshine and rainbows.”

That said, he wanted to thank all those who made things just a little bit brighter for the band before “a•sym•met•ri•cal” is available for purchase at blackholeheart.bandcamp.com on Halloween, with physical copies also for sale. The EP will then be available on all streaming platforms in the coming weeks.

“I’d like to thank Joe Loftus, Jay Preston, Ed Cuozzo, Randy Weller, James Jaskolka, Dan King, and Amanda Rogan for their contributions to this record. It couldn’t have happened without them. We would like to thank Dominique Kożuch, Keith Perks, and Alex Seeley for their incredible photography. Their role in the scene is crucial. Also, we would like to thank anyone who has supported us up to this point, and a special thanks to Rich Howells and Johnny Popko for always having our backs from day one.”