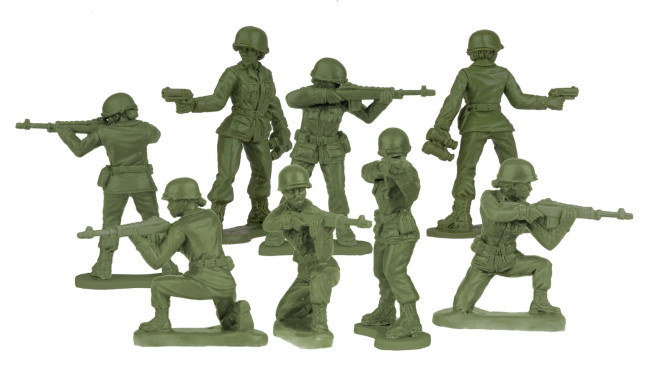 In September, a story about a 6-year-old girl’s heartfelt handwritten letter went viral when it was picked up by major media outlets. After playing with some green army men she picked up from an arcade, young Vivian Lord wondered why there were no female toy soldiers.

That’s a fair question in 2019, and while most plastic army men are made cheaply in China from the same molds used for decades, BMC Toys produces its soldiers in the United States – in Scranton, Pennsylvania, to be exact.

Responding to the letter, owner Jeff Imel said he had received requests like this before, including from service members, but creating new products from scratch is expensive for small niche businesses like BMC, which specializes in selling and reproducing classic sets of soldiers, vehicles, and playsets that represent many different wars throughout history. With the deluge of media coverage, however, interest from the general public exploded, so Imel enlisted his sister, Scranton artist Tina Imel, to draw some sketches that would become the first set of plastic army women in the style of those traditional combat figures.

Supporters of the project requested pre-orders, so Imel started a crowdfunding campaign last week to help fund the production as well as determine how many he should actually make. The Kickstarter hit its initial goal of $11,400 in less than 12 hours, and it’s well on its way to reach every stretch goal with additional figures and colors. As of now, $31,221 has been pledged by 854 backers, with 25 days to go.

The initial goal was to create a 24-piece set of female soldiers in six different poses – a
pathfinder captain, standing rifleman, kneeling rifleman, prone sniper, grenadier, and bazooka operator. Now, the packs will be 36 figures in 12 different poses, which include a running rifleman, combat medic, low crawl rifleman, radio operator, wounded soldier, and another that will be chosen through supporter feedback to fill out the ranks. They will be available in olive drab green, tan, and even pink if the last stretch goal of $31,800 is reached.

In the campaign’s frequently asked questions, Imel provides an interesting local note for those who want to know if the soldiers have names.

“Generally speaking, plastic army men don’t have names unless they’re specific character figures. Unofficially, we’ve been calling the first pose Loretta, after Navy Chief Yeoman Loretta Perfectus Walsh. She was the first woman to serve in the United States armed forces in a capacity other than as a nurse, and was also a native of Olyphant, Pennsylvania, which is just down the road from Scranton. Loretta was mentioned by a very early supporter of the project. We have names in mind for most of the figures, but I’m not certain how, or if, they’ll be used just yet,” he wrote.

The toys are expected to ship by October of 2020, just in time for the holiday season. BMC Toys was founded in 1991 by Bill McMaster, who ran the company until he passed away in 2014. VictoryBuy Inc., a family-owned e-commerce business based in Scranton, worked with his family to continue the BMC Toys product line into today, making these toys in the same factory that was producing them for over 20 years.

Imel shared his story in his own words on Kickstarter:

I’ve been offering plastic army men for many years, and every now and then a customer would ask, “Do you have any women toy soldiers?” At first, I didn’t think too much about it, but eventually I started looking to see if anybody made a set of lady soldier figures I could offer to my customers. I couldn’t find anything, but I figured some company would make a set soon. Time marched on and nothing came to market. I began to get more involved in manufacturing these types of toys, so I started thinking… maybe I should make them?

My family thought it was a great idea, but I didn’t do much about it until a retired Navy sailor sent me that familiar question. She was looking for women toy soldiers for her granddaughters, but she also came armed with compelling facts about the ever-increasing numbers and roles of women in the military. I decided it was time to get moving. I wrote a blog post describing the idea, recruited my sister to draw some rough concept sketches, and set up a newsletter. My plan was to get some feedback and, when enough folks subscribed to the newsletter, launch a crowdfunding campaign to complete the project. Boy, did I ever get feedback!

The initial response was pretty good, but I didn’t think it was enough to move forward just yet. We did a little more development work, mostly trying to bring the hair into regulation, as that was important to a lot of early supporters. I thought we’d get there eventually, but then I received a letter that changed everything. It was a heartfelt letter from a very smart little girl asking, “Why don’t you make lady army men?” I responded to her mom and let her know about the project. I thought they would be just a couple of new supporters, but I couldn’t have been more wrong.

Not long after, reporters contacted me asking about the project. It turns out the letter was sent to a few different companies that make plastic army men, and a reporter saw it on social media. BMC Toys was the only company with plastic army women in development, so I was mentioned in a couple of news stories. CBS News asked if they could stop by as part of their story about the little girl’s letter, and I was interviewed by Steve Hartman for his popular “On the Road” segment. I debuted the first prototype sculpture and announced the project was launching in time for Christmas 2020 on the CBS Evening News. Media madness ensued over the following weeks as interview requests and messages of support poured in. Since then, I’ve been working nonstop to get the plastic army women ready into production.

I hope you like our designs and support the project. Please pledge now to help us bring this new version of a classic toy into the 21st century.

‘Tanks for your support,
Jeff at BMC Toys