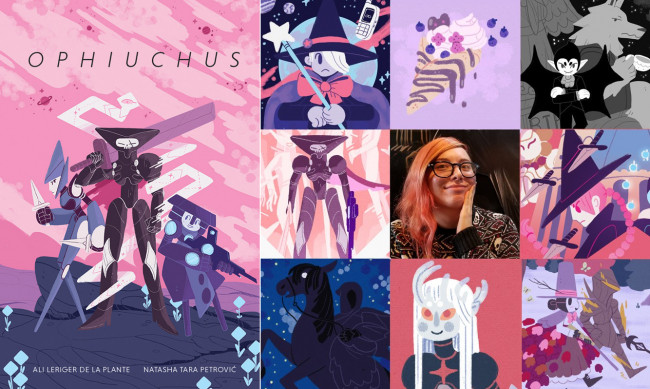 It was announced today that illustrator and comic artist Natasha Tara Petrović will visit Comics on the Green in downtown Scranton for Small Business Saturday to promote her new graphic novel, “Ophiuchus,” from Image Comics.

Currently living in Baltimore, Maryland, Petrović graduated from the Maryland Institute College of Art with a degree in illustration. Her bio notes that “she likes to draw cute things and creepy things, and it’s all usually very colorful. She has asymmetrical hair and is as spooky as 1,000 Dead Draculas.” She is one half of Dream Cake, a comic collaboration with Ali Leriger de la Plante.

Image Comics, the third largest comic book and graphic novel publisher in the industry, collected the popular webcomic “Ophiuchus” by Alexis Leriger de la Plante and Natasha Tara Petrović in its entirety and debuted it in print in August.

Perfect for fans of Sloane Leong’s “Prism Stalker,” the day-glo drenched, cybernetic young adult/teen adventure of “Ophiuchus” follows the story of a lone sentry to an ancient inactive warp gate. But when a strange being breaks through and infects her with a sentient virus, she’s approached by two machines who implore her to follow them to the center of the universe and put an end to the malevolent rot before it spreads to the surrounding worlds.

“‘Ophiuchus’ is a strange, personal project – it was based on a dream I had about trying to return home to a dead world, and confronting the ghost that was left of it,” said Leriger de la Plante.

“We really went into it hoping to eventually turn it into a book one way or another, but we never quite expected the reception we got, and we almost lost our minds when Image decided to print it. We always felt the comic would be best in print, and that really went into every aspect of making it, so we’re extremely excited for it to reach a new audience in its intended format. The comic holds a lot of our love, so if you’re interested in loss, revenge, skeletons, and robots, this is a comic for you.”

The “Ophiuchus” trade paperback is a complete, standalone graphic novel released in comic shops on Aug. 21 and bookstores on Aug. 27. “Ophiuchus” is also available for purchase across many digital platforms, including the official Image Comics iOS app, Amazon Kindle, Apple Books, comiXology, and Google Play.

Leriger de la Plante is an illustrator and comics artist based in Victoria, British Columbia, Canada. She graduated with a masters in history from the University of Victoria in 2016 and currently works on various personal projects, including multiple comics. She enjoys tea, winter, and all things robotic.

Image Comics is a comic book and graphic novel publisher founded in 1992 by a collective of bestselling artists. Image has since gone on to become one of the largest comics publishers in the United States. Image currently has six individuals on its board of directors: Robert Kirkman, Erik Larsen, Todd McFarlane, Marc Silvestri, Jim Valentino, and Eric Stephenson. It consists of five major houses: Todd McFarlane Productions, Top Cow Productions, Shadowline Comics, Skybound Entertainment, and Image Central. Image publishes comics and graphic novels in nearly every genre, sub-genre, and style imaginable. It offers science fiction, fantasy, romance, horror, crime fiction, historical fiction, humor, and more by the finest artists and writers working in the medium today.

The skeletal sentry of an ancient warpgate is infected by a malignant, sentient virus. She and two robots must travel to the center of the universe to stop the spread of rot throughout the galaxy.