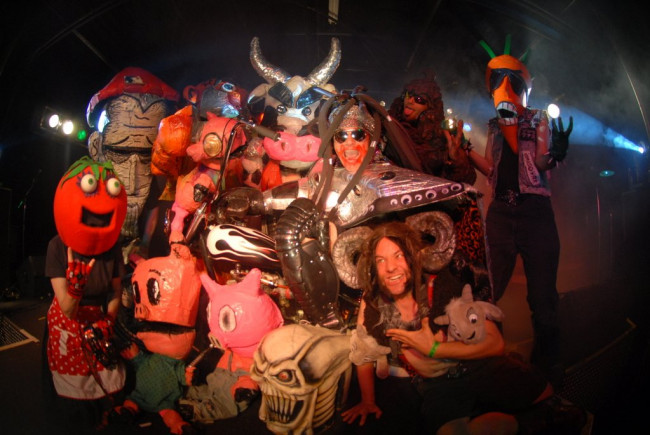 Known for their sophomoric humor, theatrical performances, crazy costumes, and intentionally crude musicianship, Green Jellÿ will return to Scranton with their Punk Rock Puppet Show at Stage West on Thursday, Jan. 30 at 8 p.m.

Green Jellÿ was recently in the area to headline the first night of Darkenheavy Campfest in Jermyn, and they played at the Irish Wolf Pub in downtown Scranton in 2017 and 2018.

Vocalist Bill Manspeaker, a resident of Kenmore, New York, formed Green Jellÿ in 1981 as Green Jellö, a four-piece comedy punk rock band. As most of the band’s members were poor musicians at the time, they billed themselves as “the world’s worst band” and emphasized bizarre theatrics, power chords, and self-deprecating humor. The name, which was suggested by a friend of the band, was chosen because the band members felt lime-flavored Jell-O was the worst Jell-O flavor, and Manspeaker believed this also reflected the band’s talents. The band changed its name due to legal pressure from Kraft Foods, who claimed that it was an infringement of their trademark. Despite the spelling difference, the new name and the old are pronounced identically.

Green Jellÿ began playing punk shows around Buffalo and became notorious for their onstage antics and live theatrics. Forming new bands in cities all over the world, they’ve had nearly 800 members during the band’s existence, with Manspeaker the only consistent member throughout. The band’s early 1990s lineup during their most popular phase, “Cereal Killer,” included several musicians who went on to appear in other major ’90s bands, most notably Tool. Their biggest hit was the single “Three Little Pigs,” adapted from the nursery rhyme, which features Tool singer Maynard James Keenan on backing vocals.

In 1994, the band wrote and produced the soundtrack for the video game “Spider-Man and Venom: Maximum Carnage” for the Super Nintendo Entertainment System and Sega Genesis. Due to the state of video game music technology at that time, the soundtrack was not recorded music, but a computerized rendition of the songs. In the same year, Green Jellÿ appeared as themselves in an episode of the Fantastic Four animated series in which The Thing records a music video for a song about his catchphrase, “It’s Clobberin’ Time!”

Also nominated for an MTV Music Award and a Billboard Music Award, Green Jellÿ held the record for the most requested video in MTV’s history and still holds the record for the biggest-selling debut record in England’s chart history. More recently, the group has over 12 million plays on YouTube and sold over 15 million songs worldwide, including over one million songs on iTunes.

Reuniting in 2008, the group has been touring ever since, with over 1,250 shows all over the world and counting. Now based in West Hollywood, California, Green Jellÿ holds the Guinness World Record for the largest band in the world with over 900 members, picking up new recruits wherever they go, including several in Northeastern Pennsylvania like Thomas the Red, the “stand-up comedy viking” from Scranton. After meeting Manspeaker at the Irish Wolf Pub, Thomas the Red joined the band and went on tour with them this year.

Learn more about Thomas the Red in Episode 64 of the NEPA Scene Podcast: