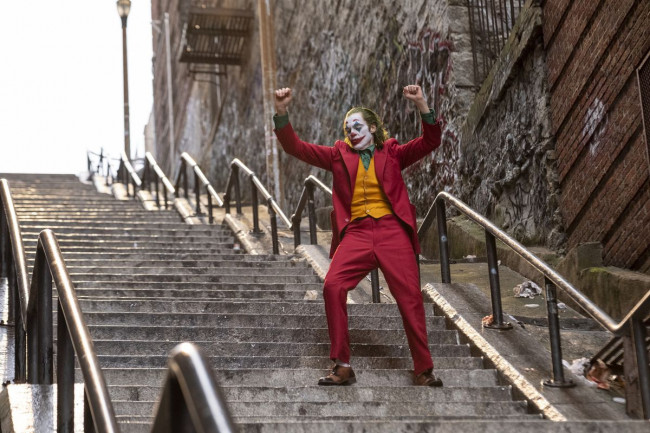 Sandwiched between apartment buildings in the Bronx, it’s been dubbed by moviegoers the “Joker Stairs,” earning its name and fame after being featured prominently in “Joker.” Since the film’s release, fans have flocked to the stairs, where they’ve been posing for photos – much to the annoyance of some local residents – and uploading them to social media.

As I’ve learned from studying film-related tourism, it’s common for people to visit the places they see in their favorite movies and TV shows. But the relationships among tourist sites, visitors, and locals aren’t always the same, and some destinations are more benign than others.

A place appears on screen – and is transformed

The Joker Stairs are the site of one of the movie’s most memorable scenes: when Arthur Fleck, played by Joaquin Phoenix, embraces his murderous Joker identity and blithely dances down a long stairway near his apartment.

The film cues viewers to the significance of the moment. Peppy music eclipses the sounds of the city. Slow-motion shots allow viewers and Fleck to linger. The scene appears on movie posters and in other publicity materials.

When fans learned that the iconic scene was filmed on location at the outdoor staircase connecting Shakespeare and Anderson Avenues in the Bronx, they started traveling to the site. Some wore costumes. Some played music from the film’s soundtrack. Others simply brought their cameras. Images tagged #JokerStairs started appearing on Instagram, introducing the visually striking site to even more people, who then wanted to see it for themselves.

It’s not unusual for people to visit sites they know from movies, TV shows, books, or memes. Tourists strike their “American Gothic” pose in front of the Eldon, Iowa house from Grant Wood’s famous painting. So many people flocked to the shore of Thailand’s Maya Bay after watching “The Beach” that the site became overcrowded and polluted. In Northern Ireland, official tours showcase places that appear in “Game of Thrones,” and South Korea’s tourism board highlights sites from popular dramas.

Tourists who visit these attractions view them through what scholars call a “mediatized gaze” – a way of seeing a place that’s been influenced by its depiction in some form of media. The mediatized gaze can change an otherwise unremarkable site into a must-see destination. It can make locals, not just visitors, think differently about a place.

One of the most famous examples of this phenomenon involves another set of stairs. In 1976, “Rocky” sparked a fan practice that turned the steps of the Philadelphia Museum of Art into a landmark now known as “the Rocky Steps.”

Beyond the fact that they’re both outdoor stairways that have become tourist destinations, the Rocky Steps and the Joker Stairs are more deeply intertwined.

The film’s director, Todd Phillips, has acknowledged that “Joker” pays homage to many movies from the 1970s and early 1980s. Its scenes, stylistic features, and characters include nods to films such as “Taxi Driver,” “Network,” and “The King of Comedy.”

Few critics, however, have made the connection to “Rocky.”

Each film tells the story of a down-and-out guy who, over the course of the movie, gradually finds his confidence. And each film uses an architecturally striking set of stairs to symbolize the protagonist’s development.

Rocky, the boxer played by Sylvester Stallone, initially struggles to run up the art museum steps; he’s out of shape and daunted by the prospect of training for the biggest boxing match of his life. Only after building up his physical strength and self-esteem does he bound up the steps, pump his fists, and soak in the view of the Philadelphia skyline.

In early scenes of “Joker,” Phoenix’s Arthur Fleck trudges up the long flight of stairs – a routine that underscores his sad existence. When he emerges as Joker, however, he navigates the stairs with eerie aplomb.

At the turning point in “Rocky,” however, Rocky ascends the stairs; Fleck, on the other hand, descends. For one character, it represents his heroic potential. For the other, it symbolizes his descent into infamy.

In the film and through tourism, the Rocky Steps bring people into a space of privilege. They represent success and accomplishment, both for the fans who spring up the stairs and for a city that has benefited from their pop culture fame.

Exciting News: @sportsillustrated has reached out & requested to see our film "The Pretender". The magazine is working on a Rocky themed piece for their December issue. And of course the world's #1 Rocky fan Mike Kunda was interviewed. We will keep everyone updated. You've come along way @ilooklikerocky

A post shared by ThePretenderMovie (@thepretendermovie) on Nov 7, 2018 at 3:53am PST

At the Joker Stairs, however, it’s the people with privilege who are more likely to descend on the neighborhood and its newly famous steps. They see and treat the site differently than locals who know the stairs as part of their commute, the place they used to skateboard or where their parents told them not to walk after dark.

These differences contribute to the tension surrounding the Joker Stairs. While a tourist might be excited about the adventure of tapping into a piece of popular culture, a local might be wary about the attention from outsiders.

To truly understand what’s happening at the Joker Stairs, it’s important to think about the role they play – both in the film and in real life.