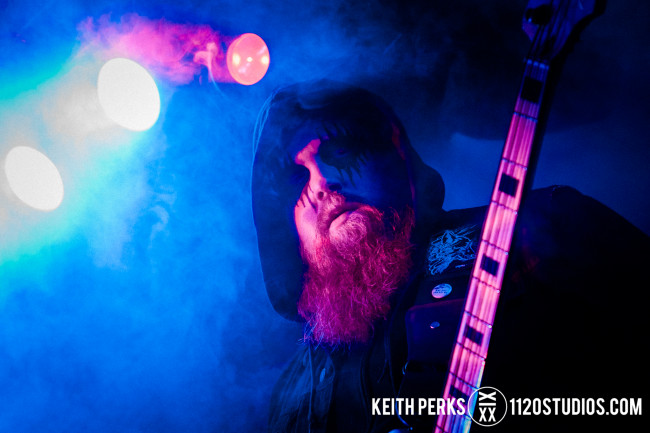 This week, the group announced that their record release show will be held Saturday, Dec. 7 at Karl Hall in Wilkes-Barre, so to accommodate hometown fans who want to party hard or can’t seem to cross that invisible county line, a party bus will leave The Bog (341 Adams Ave., Scranton) at 7 p.m. and return by midnight.

Doors at Karl Hall (57B N. Main St., Wilkes-Barre) open at 7:30 p.m., and the show starts at 8 p.m. Regular admission is $10 at the door; party bus passes are $25 and include admission, a ride from The Bog to Karl Hall and back, a copy of the cassette, and beers on the bus. Bus seats are limited, so passes can be purchased in advance at Loyalty Barber Shop (342 Adams Ave., Scranton) or directly from Black Nihil members. The concert is BYOB for those 21+ with ID.

Loyalty co-owner James Simon founded Black Nihil in late 2018, following up his previous projects The Hill You Die On and These Idol Hands with a sound influenced by his love of black and doom metal. By the spring, Simon (bass), Aaron Ferranti (vocals), Anthony Magraner (guitar), Jamie Macheska (keyboard), and Gabe (drums) were playing ritualistic shows in black attire and corpse paint with women in robes drinking what appears to be blood on stage.

“I like to think that we stray away from your typical stereotypes and conventions. Our sound is unique and something a little different than what is the ‘norm’ for the area. We added theatrics to our live show and also have our own version of corpse paint that brings a ‘street’ black metal feel, and I believe that element brings something different to the table. Our music kind of sounds old in a way; we have had numerous people mention Pentagram,” Magraner told NEPA Scene last month.

“All of our members listen to some form of metal, but within very broad subgenres that I believe all pull together to create our sound. It’s the influence of our backgrounds, ranging from doom metal to hardcore to thrash and some black metal.”

Recorded and mixed by James Yamrus at King Room Studios in an old church in Wilkes-Barre and mastered by Clyde Rosencrance at Republic Audio Studio in Clarks Summit, Black Nihil’s self-titled EP features four songs that include “Cross My Heart,” released on Devil’s Night just before Halloween with a black-and-white, horror movie-inspired music video.

“Being our debut, I like to think of the EP as a formal introduction to the band – four songs that we poured our hearts into and will showcase who we are at the present time. Being so new, we’re still constantly evolving, but I think it’s a good snapshot of who we are as of right now,” Magraner said.

“James and Aaron collaborate for the lyrics on all the songs. They have a process that keeps it poetic while catering to Aaron’s primal urges when he just goes to another place, when letting it all out. They tend to draw from their darkness and emotions and use it as inspiration. It’s typically left a bit vague, as to allow anyone to plug in their own emotions and connect with an overall feeling. They have a specific connection with each song, and the listener can have theirs.”

Combining this with a party bus atmosphere will surely give music fans an experience unlike anything else in the local scene.

“[The theatrical presentation] allows us to become someone else while playing, to slip into another mindset. Also, at the end of the day, when you see a band live at any level, you’re paying to be entertained. James always says, ‘No one wants to pay to see their neighbor on stage in the clothes they just cut their grass in,’ which I believe was something Lemmy once said. And he’s right,” Magraner noted.

“As stated before, it’s our own version of makeup that we came up with that we feel suits us and our sound. We are not wearing bullet belts and giant spikes and pentagrams because that’s simply just not us.”