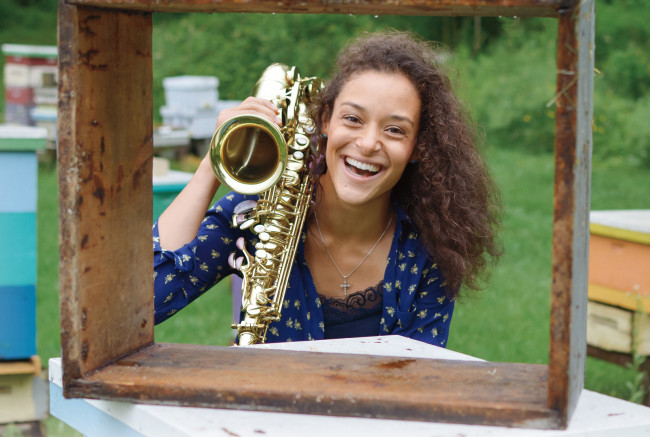 For the fifth year, the Scranton Cultural Center at the Masonic Temple will host Winter Blues Guitarmageddon in the Grand Ballroom on Friday, Feb. 21, this time with renowned blues singer and saxophonist Vanessa Collier making her Scranton debut as headliner.

Throughout the years, Winter Blues Guitarmageddon has evolved into a one-night mini festival showcase, each year offering a different flair. The 2020 event, dubbed “Next Generation,” will feature three rising stars under the age of 30 who are instrumental in keeping the blues alive.

Seen locally at the Briggs Farm Blues Festival in Nescopeck, headliner Vanessa Collier is a 2013 Berklee College of Music graduate on an accelerated track in her career. She is a five-time Independent Blues Awards and three-time Blues Music Awards nominee as well as recipient for “Best Horn – Instrumentalist,” which is the equivalent to the “Blues Grammys.” She has been promoting her Billboard Blues chart-topping album, “Honey Up,” and will just be returning from an extensive world tour where she shared stages with blues legends like Buddy Guy, Taj Mahal, Keb’ Mo’, Kenny Wayne Shepherd, George Thorogood, and many more. Additionally, she has worked alongside Annie Lennox, Kathy Mattea, and Willie Nelson. Woven by funk, gospel rock, and blues, her soulful sound is one of distinction as she trailblazes through a guitar-centric world of contemporary blues, pushing boundaries all over the world.

“We’re thrilled to have Vanessa on this bill and are very excited to have her here in Scranton for the first time,” organizer Maria Santomauro said. “In fact, the entire lineup is super impressive, and all will be debuting here. Plus, they are all great friends sharing a kinship that’s going to resonate on and off the stage. You can’t get more special than that.”

Adding to the lineup and hailing from Harlem, New York will be King Solomon Hicks who, at 13-years-old, began playing with the Cotton Club 17-piece band as lead guitarist and continues to perform there today. Known has “Lil BB,” Hicks has not only traveled the world playing festivals and clubs, but has also performed with Tony Bennett, The Destroyers (George Thorogood), Marcus King, and Jimmy Vivino (bandleader for Conan O’Brien), just to name a few. He performs regularly in New York City’s notable blues clubs, and his first major release on Mascot Label Group will hit the streets in late spring.

Completing the lineup is the Gabe Stillman Band, a three-piece machine that runs at full-tilt for every performance. While their sound is unmistakably rooted in the blues, the band draws from the deep well of all-American roots music. Based in Williamsport, Gabe Stillman, who is also a Berklee graduate, is known for his high-energy, hard-stomping blues.

In January 2019, Stillman and his band returned from the 35th International Blues Challenge in Memphis, Tennessee after landing in the final eight out of 101 starting entries. Additionally, his command of the guitar earned him serious notice with the slate of judges and earned him top honors, winning the esteemed Gibson Guitar Award. He, too, is no stranger to celebrity stages and has had the privilege of playing alongside Buddy Guy. The Gabe Stillman Band also was a supporting act for George Thorogood and the Destroyers.

Scranton native Chris “Bad News” Barnes will serve as the evening’s emcee. With three chart-topping albums, Barnes is hailed as one of the most exciting new live acts on the current blues scene. He is a Blues Foundation Charter Member and serves on the International Blues Challenge Teen Program Board of Judges. Barnes started his comedic blues career at 17-years-old, as the opening act at Terry Dunne’s legendary NYC blues club Tramps, where he would improvise original blues tunes based on audience suggestion with wild harmonica riffs.

Tickets, which are $25 in advance or $30 the day of the show, can be purchased at the Fidelity Bank Box Office at the SCC (420 N. Washington Ave., Scranton) in person, all Ticketmaster outlets, or by calling 570-344-1111. For additional information and a full schedule of events, visit scrantonculturalcenter.org.