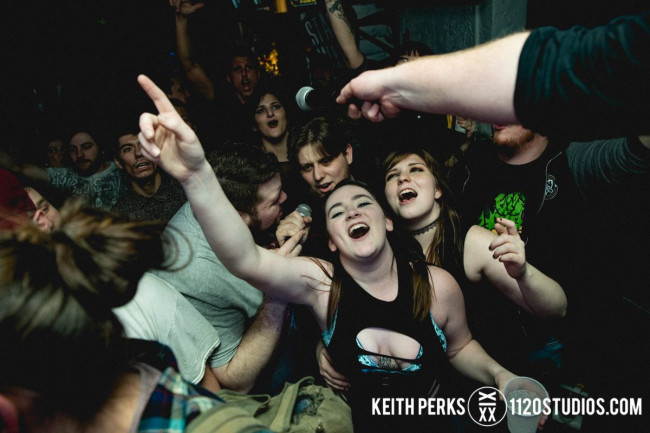 Screaming Infidelities: Emo Night will return to Stage West in Scranton next Saturday, Dec. 28 for what has become an annual holiday Emo Night. In honor of National Emo Day, they’re teaming up with The Strange and Unusual owner Josh Balz to discount tickets to only $8 for the next 72 hours.

The “cultural calendar” of National Today explains this holiday:

Did you rock skinny jeans, tight T-shirts, and studded belts? How about jet-black hair and long bangs? For many people, the word “emo” describes a sad teenager who dresses in a very deliberate way. But the emo subculture has a long, storied history that reaches back to the 1980s and continues to resonate today. On National Emo Day, we recognize the rich complexities of the emo movement and gain a greater appreciation of its place in popular music. Weezer, anyone?

Screaming Infidelities: Emo Night provides a one-of-a-kind experience that encourages crowd interaction and features its fair share of confetti cannons. While co-founders DJ Hersh and Joe Caviston spin cult classic emo, pop punk, punk, and indie rock tunes, the crowd is encouraged to dance, sing along, and fans are even invited on stage to live out their rock star dreams.

The local group, who have capitalized on the national trend of “emo nights” since their debut at the 2017 Electric City Music Conference, has seen success with their perfect playlists and big sing-a-longs at multiple venues. After selling out both The Bog and Stage West in Scranton, along with Senunas’ Bar & Grill in Wilkes-Barre and the River Street Jazz Cafe in Plains, on multiple occasions, they found a permanent home at Stage West.

The DJ duo also took their show on the road for a time, performing to capacity crowds in Lancaster, Reading, and Southampton; their date at Tellus360 in Lancaster saw over 650 people in attendance. Along the way, they’ve added opening slots for local bands with sounds in the vein of emo, pop punk, and indie rock and shared stages with Craig Owens of Chiodos, William Ryan Key of Yellowcard, Chris “Fronz” Fronzak of Attila, and Josh Balz, former keyboardist of Scranton metal band Motionless In White and current owner of The Strange and Unusual Oddities Parlor in Kingston and Philadelphia.

“Josh Balz has been kind enough to absorb the $2 per ticket for the next 72 hours,” Caviston said regarding this upcoming event on Dec. 28. “Since he’s going broke over it, be sure to get your last minute gifts there.”

Screaming Infidelities’ annual holiday show at Stage West (301 N. Main Ave., Scranton) is a family reunion of local musicians, former “scene kids,” and casual fans of emo music. To make things more affordable for fans with tight budgets at the end of the year, tickets are $8 on Eventbrite until Dec. 22, when they will go back up to the regular price of $10. Tickets will also be available at the door.

“This year, we’ve got Santa coming to Emo Night. Attendees will be able to get their picture taken with him for free for the first few hours of the night,” Caviston noted.

“Who knew there was an Emo Santa?” DJ Hersh added. “I didn’t know they had eyeliner at the North Pole.”