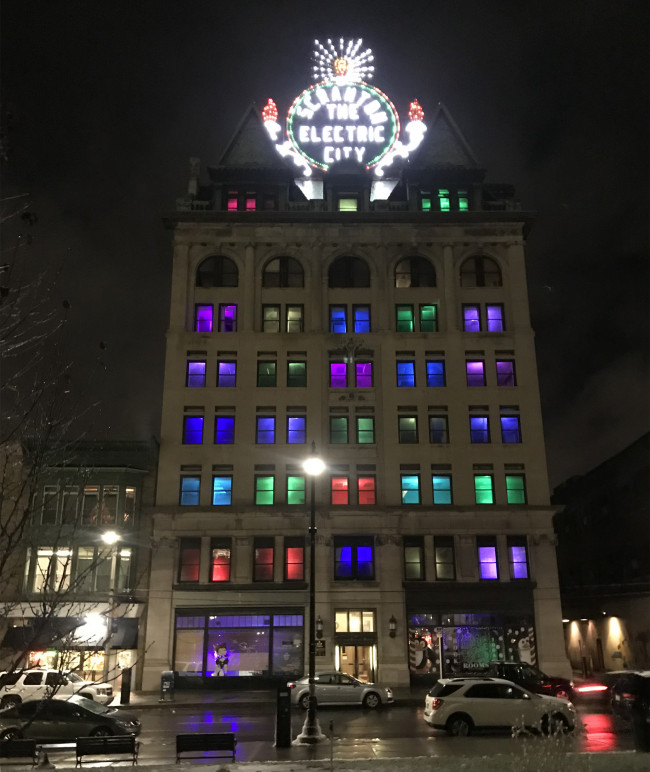 If you’ve recently walked though Courthouse Square in the evening, you may have noticed something different about the Scranton Electric Building. The windows on each floor below the iconic Electric City sign are filled with colorful moving lights, just in time for the holidays.

The project was sponsored by Electric City Escape, a tenant in the Scranton Electric Building, and supported by building owner Action Properties, Inc. The Northeast Art Project has a goal of creating public art to beautify and bring visitors to the area, and this is the group’s latest project after painting the windows of the Lackawanna County Government Center with festive characters for the Lackawanna Winter Market earlier this month.

“The Scranton Electric Building is a historical work of art. I envisioned it being lit up to hopefully raise awareness about public arts and draw attention to the beautiful building during the most wonderful time of the year,” Electric City Escape owner and Northeast Art Project founder Ryan Hnat said.

This Friday, Dec. 20, onlookers can join NEAP and Electric City Escape at 5:50 p.m. to witness the official lighting of the Scranton Electric Building (507 Linden St.). Changing and transitioning into different colors, the lights will be on display each night until the end of January, joining over 50 downtown businesses with windows decorated for the holidays.

Our latest art project! Come see the unveiling this Friday on the square right outside of the Scranton Electric Building. As we will be lighting up the building every night at 5:50pm. Come this Friday 12/20 and check it out. #holidaylightshow #scranton #art #electricbuilding See you on the square!

Electric City Escape is a physical adventure game in which players are locked in a room and have to find clues, break codes, and open locks in a series of puzzles within 60 minutes in order to win. Current games like Escape the Final Act: The Houdini Experience, Escape the Coal Mine, Escape the Legend of Luna Park, and Escape the Doctor’s Study play on the area’s history and encourage fun with friends and family, team building, creative problem solving, and pure excitement like you’re in a movie.

The Northeast Art Project streamlines the process of implementing and completing public works of art in Northeastern Pennsylvania, including one that turned heads at The Marketplace at Steamtown earlier this year. From urban to rural locations, the organization assists in marrying professional, amateur, and community groups to public projects ranging from community murals to sculptures. With knowledge of both historical and contemporary art, NEAP hopes to be a catalyst for more public artwork that preserves and enhances the community’s identity and aids in its continued growth.

Learn more about local public art projects and the early formation of NEAP with Hnat in Episode 37 of the NEPA Scene Podcast:

All done window painting! More to come! Make sure you come take a photo in front of it at the Lackawanna holiday market December first Friday and all that weekend @lackawannamarkets @lackcountypa #scranton #windowpainting #snowman #abominablesnowman 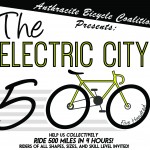