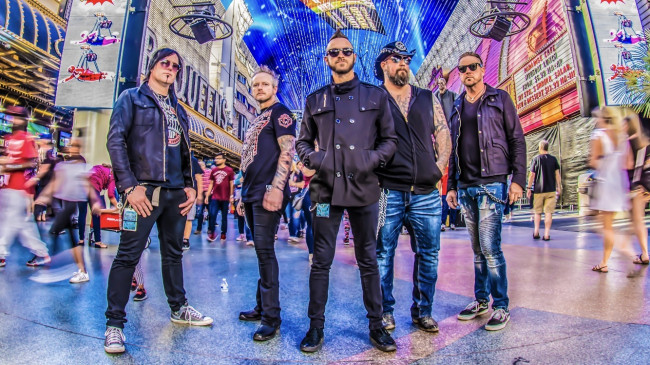 It was announced this week that gold-selling “Tennessippi” rock band Saving Abel, known for songs like “Addicted,” “Drowning (Face Down),” “18 Days,” “The Sex Is Good,” and “Stupid Girl (Only in Hollywood),” will return to Stage West in Scranton on Wednesday, Feb. 19.

Local rockers Another Day Dawns from Lehighton and Always Undecided from Mountain Top will open the 21+ show.

Singer Jared Weeks and guitarist Jason Null formed Saving Abel in the small town of Corinth, Mississippi in 2004. Weeks was learning to play the guitar at his best friend’s house and Null, who was in a competing rock band in the same town, walked in to rehearse. Null and Weeks hit it off, so a couple of days later, the two were writing songs together. Early in 2005, their songs caught the ear of noted producer Skidd Mills (12 Stones, ZZ Top, Saliva, Robert Cray), who brought the two into his 747 Studio in Memphis, Tennessee to record some of these songs.

Saving Abel gradually came together with the addition of guitar player Scott Bartlett, bass player Daniel Dwight, and Blake Dixon on drums. Weeks would throw Saving Abel demo CDs onto the stages of bigger bands that toured through Corinth.

“I used to work at a hospital. I’d have to be there at 4:30 in the morning drawing blood. I’d wake people up and stick a needle in their arm. I’d be walking around the hospital, singing ‘Addicted’ in my head, writing down the lyrics on patients’ clipboards and doctor script pads,” Weeks recalled.

After shopping the album around for almost a year, original bassist Daniel Dwight left the group for Memphis pop rock band Ingram Hill and was replaced by longtime friend Eric Taylor. The band’s hard work and determination led to a copy of the song “Addicted” falling into the hands of former Virgin Records A&R consultant Rick Smith, and he e-mailed the song to Virgin CEO Jason Flom. He immediately liked what he heard and sent A&R vet Kim Stephens (Collective Soul, Matchbox 20, Edwin McCain) to watch the band perform in Jackson, Tennessee. “Addicted” was released as a single soon after.

Their self-titled major label debut was released on March 11, 2008. The CD featured the lead single “Addicted,” which rose to No. 2 on the Billboard Mainstream Rock Songs chart. On Jan. 15, 2009, the CD peaked at No. 49 on the Billboard 200, and the album received gold certification from the RIAA in March because of the song. Some controversy surrounded “Addicted” because of the sexual nature of the lyrics, which some radio stations refused to play. However, there was another version of the song recorded, changing one of the lines from “going down on me” to “rolling around with me” that could be aired.

Their second studio album, “Miss America,” was released by Virgin on June 8, 2010. The first single from the CD, “Stupid Girl (Only in Hollywood),” went to No. 7 on the Mainstream Rock Songs chart. “The Sex Is Good” was issued as the second single, reaching the No. 1 spot on the same chart in January of 2011.

Saving Abel’s third album, “Bringing Down the Giant,” followed on July 17, 2012. Released by eOne, the record peaked at No. 74 on the Billboard 200 chart and ended up being their last with Jared Weeks, who left the group at the end of 2013 to pursue a solo career. Scott Austin, the frontman of Trash the Brand, became the new lead singer as drummer Michael McManus announced his departure from the band.

Their latest and first album with Austin, “Blood Stained Revolution,” was released on Nov. 11, 2014, which featured the lead single “15 Minutes of Fame.” In 2017, Scott Wilson, formerly of Tantric, replaced Eric Taylor on bass as Blake Dixon returned on drums. They’re currently working on the band’s fifth studio album.