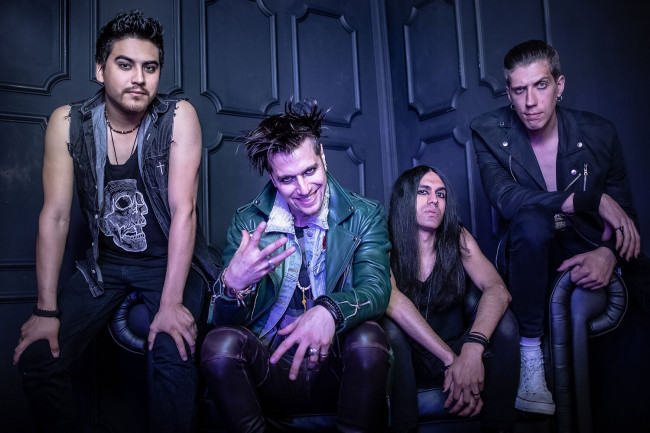 New York City rock band Makes My Blood Dance, who mixes disco, glam, electro-pop, and metal into their music, will make two stops in Northeastern Pennsylvania on their Power of the Lightside Tour in support of their new single.

The first will be at the Border Bar (170 Laurel Plaza, Pittston) on Saturday, Feb. 22 at 8 p.m. with local opening acts Fallen Pride, Fatal Misconception, Royal Hell, and Static in the Attic. Tickets, which are $5, are on sale now via Brown Paper Tickets; 10 percent of proceeds will be donated to the DezyStrong Foundation.

Every young band searches for a distinctive sound. For the Brooklyn-based quartet Makes My Blood Dance, that quest is over. In a remarkably short time – they’ve only been a band for a year and a half – they’ve developed a sonic and stylistic signature that’s theirs and theirs alone. They’ve pitched their tent at a heretofore unexplored intersection of disco, glam, electro-pop, and metal, and they’ve come up with something that would sound equally appropriate on a dance floor or at a roughneck rock club.

Metal and EDM are both styles that get crowds moving, and the members of Makes My Blood Dance are nothing if not firestarters. They’ll borrow whatever they can and fit it into their unprecedented amalgam and, in the process, they get people jumping.

Lyrically, this band addresses a lot of deeper issues in human nature, such as uncertainty, fear, connecting with others, fitting in, and finding your true self. The songs are meant to start social discussions and bring issues like addiction, cruelty, and violence to a deeper root where it can be understood and transcended. Following “Beaming Right Up” last March, their second single, “Sick as Our Secrets,” discusses how our vices come back to haunt us on a daily basis, that love is the only true connection, and we have to face our fears in order to learn about who we are.

“We believe in unifying people, that music heals and changes molecules and there is always help if you ask for it. We bring that vibe and energy to all our shows and encourage our fans to meet others and share it with them. We love people, we love music, we love to network and bring the vibrations higher,” singer Evan Russell Saffer explained.

This single drips with Sunset Strip swagger and tight New York City grooves, and amidst the chaos, there’s a message of hope. There’s a punk rock camaraderie here, with razorblade guitars and cymbal-splitting drums spitting in the face of anyone who wants you to dwell on your damage. Judging by Saffer’s vocal shrapnel and socio-political lyrics, the world’s having a rough time, but that doesn’t mean we have to as well. For all of the song’s scattershot influences, these guys somehow keep it on the rails and even make it radio-ready. A big assist goes to mixer David Ogilvie, who knows a thing or two about unleashing a beast of a song in the studio. His many credits include like-minded life-threateners Skinny Puppy, Rob Zombie, and Marilyn Manson.

Anyone can take different genres, throw them in a blender, and call it a song. It takes some kind of twisted genius to make the kind of molotov cocktail you won’t stop listening to – and can’t stop moving to. Saffer and guitarist/synth player John Polimeni are the minds behind Makes My Blood Dance, with bassist Filia Luna and drummer Allan Zaparoli as their fellow inmates running the asylum. The four make mayhem that beckons from a dark alley. The music video for “Sick as Our Secrets” finds the band in their natural habitat – a dingy rock club, one of the many they regularly darken the doorstep of as they tour around the Northeast. A girl writhes seductively while a crew of misfits hangs out in the mens’ room because, of course, this is a rock video.

It features a taste of MMBD’s killer live show, with each member playing as if their lives depended on it. When the guys aren’t melting the faces of their rabid fans, there’s an eerily timely narrative going on. An alienated, misunderstood everydude walks away from a prison-like home and sets out to do… what? Looks like nothing good. But the band’s message of unity and acceptance plays out here as he finds his people. Bands like Makes My Blood Dance kill it because they mean it.

Their latest single, “Power of the Lightside,” was released on Jan. 1 via Alpha Centauri Records and prompted their current tour, where 10 percent of profits are donated to various charities. 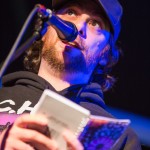