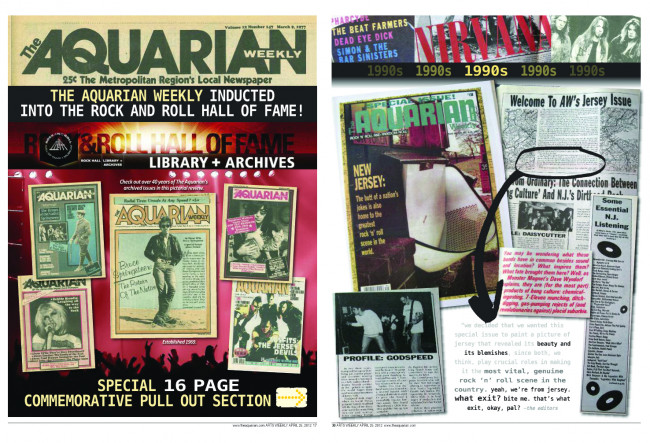 For the first time in its existence, The Aquarian – the tri-state area’s 50-year-old alt-weekly newspaper based in Little Falls, New Jersey – has temporarily suspended its print edition, moving to an exclusively online format as it finds itself in uncharted waters, swimming against the tide of the coronavirus pandemic.

The Rolling Stones, The Who, U2, Madonna, Bruce Springsteen, and Metallica are just a sampling of the groundbreaking artists that have been featured in the pages of The Aquarian Weekly, one of the last truly independent music periodicals in America. In addition to national acts of all levels, The Aquarian also covers local and regional bands, from punk and metal to jazz and blues.

“It was with very heavy hearts that my partner Chris Farinas and I decided to temporarily suspend the print edition,” said The Aquarian’s co-publisher, Diane Casazza.

“For 50 years, The Aquarian has not missed a beat – we survived the Vietnam War, the AIDS epidemic, the mass media online migration, the Great Recession, 9/11, Superstorm Sandy, and all the milestones that have shaped our region and our country.”

Since 1969, The Aquarian has provided readers in New York City, New Jersey, and Philadelphia with insightful commentary on music, art, and culture every week. Now, the publication aims to provide that same extraordinary content online via its website, theaquarian.com, and its social media platforms.

“In a lot of ways, we’re doing what other publications opted to do 10 years ago,” said Managing Editor Daniel Alleva.

At the height of the digital revolution, The Aquarian could have easily followed the trend and switched to an online-only format. But, as Alleva noted, “We have been blessed with an incredibly loyal following of readers who like to have a physical newspaper. It’s not because they aren’t tech savvy; make no mistake – our readers definitely follow us on social media and read our features online. But our readers also understand the inherent value of something tangible, and that’s what we’ve strived to give them.”

Positioned between the East Coast’s most renowned musical meccas – New York City; Asbury Park, New Jersey; and Philadelphia – The Aquarian has observed the evolution of the musical landscape from a unique perspective. The paper was an early champion of a then-unknown boardwalk drifter by the name of Bruce Springsteen. Meanwhile in Manhattan, writers raved about what was happening at a club called CBGB and the artists playing there: Patti Smith, Talking Heads, Blondie and, of course, the Ramones. Today, these artists are nothing short of household names, but during their salad days, they were simply rock ‘n’ roll hopefuls, honing their craft in tiny shore town bars and gritty downtown clubs until success came calling – and The Aquarian was there every step of the way, chronicling their journey from unknowns to icons.

“We’ve never lost sight of the fact that music brings people together,” Alleva said. “It creates memories, inspires creativity, and forges bonds. We’ve prided ourselves on being an independent magazine, but we’ve always approached every story we publish with a universal mind, and I think that shows in everything we do.”

The Aquarian has also had a major impact on the music industry by each week publishing its 14 Day Concert Calendar, an extensive who’s who of performers and special events. Add in the generous advertising space reserved for concert venues and independent artists and it can safely be said that The Aquarian has been the heartbeat of the tri-state area’s entertainment industry since its inception.

“The Aquarian has worked tirelessly through the years to create a platform where national, regional, and local acts all have equal footing in terms of exposure and opportunity,” said co-publisher Chris Farinas.

“The relationships that we have built – be it with promoters, venues, or the artists themselves – has had a tremendous impact on the industry’s ability to remain vibrant, especially during a time where various lines of communication are all vying for the consumer’s attention.”

With a third of The Aquarian’s readers falling within the highly influential 20-to-40-year-old age bracket and its print circulation of 25,000 issues available at over 1,000 distribution points, The Aquarian is eager to resume its print edition as soon as it possibly can. In 2012, the newspaper was accepted into the Rock and Roll Hall of Fame’s Library and Archives, the world’s preeminent research collection of written and audiovisual materials relating to the history of rock and roll. Every issue from 1976 through present day has been preserved there, and The Aquarian team has every intention of continuing to build upon that historical record.

“We have kept the dream alive for so many big and small musicians,” said Casazza, “and we pray that we can continue to do so.”

For now, though, safety will take precedence during the COVID-19 quarantine as readers are invited to continue to share in The Aquarian’s all-inclusive musical experience online at theaquarian.com, along with Facebook, Twitter, and Instagram.